Black workers in state 3.5 times more likely to be unemployed.

By Tamarine Cornelius, Wisconsin Budget Project - Mar 29th, 2018 12:58 pm
Get a daily rundown of the top stories on Urban Milwaukee 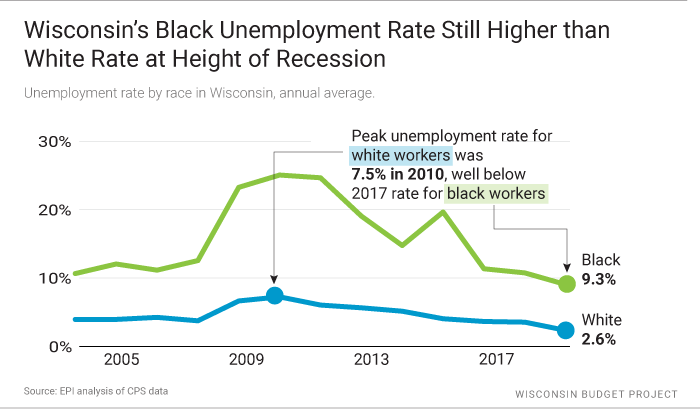 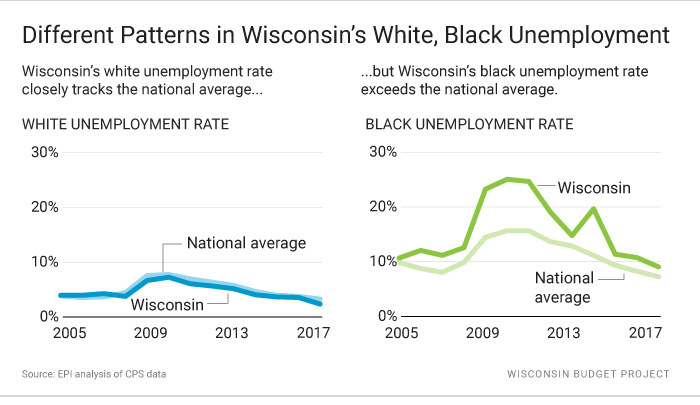 The black-white unemployment gap exists even after controlling for factors like education, experience, and age – pointing to systemic denial of opportunity for black workers. As the New York Times noted:

“[A] hard truth is that even when the economy picks up and employers are on a hiring binge, black people have a harder time getting jobs and are paid less than similarly situated white workers. That is exactly what happened from 1996 to 2000, the last genuinely hot job market, and it points clearly to racial discrimination, not just in hiring, but in a range of public policies that disproportionately affect black people. These include the dearth and high cost of child care, which harms single mothers the most; poor public transportation in many rural and suburban areas, which makes keeping a job difficult; and mass incarceration of black men and the barriers to employment that go with it.”

The unemployment rate gives only a partial picture of how workers are faring in an economy, as it doesn’t measure other important factors like labor force participation or wage growth, neither of which is at particularly promising levels for Wisconsin workers. Even given those caveats, Wisconsin’s overall low unemployment rate is a favorable sign that many job seekers are successful at finding employment – but the gap between black and white unemployment rates tells us that not all workers in Wisconsin are offered the same opportunity for success. Glossing over that fact will make it harder to tackle structural barriers to employment and ensure workers of all races have bright futures.