More Burgers for South Side 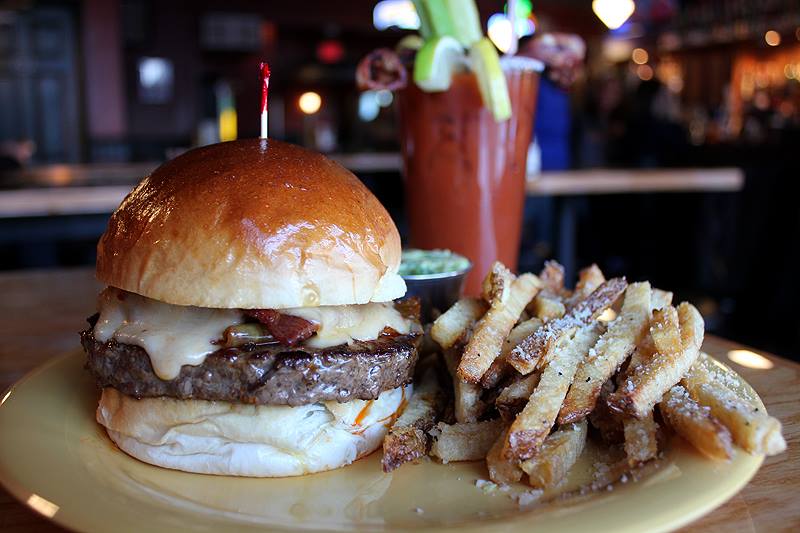 Oscar’s on Pierce’s “The Big O.” Photo from Facebook.

Those delicious burgers at Oscar’s Pub & Grill (1712 W. Pierce St.) are about to be hitting the grill at a sister restaurant later this month. Oscar’s Winner’s Circle, as the new place will be called, will officially open on March 19th at 3800 W. Burnham St., and will have “all new burgers, sandwiches, and appetizers with flavors from around the world.” Both businesses shared posts with a plentitude of exclamation points on Facebook announcing the news.

Oscar’s Winner’s Circle will be officially opening Monday, March 19th at 11am!

Come celebrate with us and try out our menu! Our burgers feature new, creative flavor combinations, and we’ve got plenty of healthy and kid-friendly options, all at reasonable prices. Our 40 tappers will be ready to pour along with our full bar. We are all very excited about this new venture and hope to see you at 3800 W. Burnham soon!

Poke is having a moment in Milwaukee. Following the December opening of Freshfin Poke (316 N. Milwaukee St.), another restaurant specializing in the Hawaiian cuisine is slated to open in May. A franchise of the national chain Aloha Poke Co. will be opening at 220 E. Buffalo St., right next to Shake Shack. The Milwaukee location will be Aloha’s first in Wisconsin. The Chicago-based company also has locations in Illinois, Minnesota, Colorado and California because, you see, Poke is all the rage.

Milwaukee Magazine’s Ann Christenson has some of the menu options:

Aloha offers custom bowls in three sizes ($7.50, $9.50, $14.50). Diners choose a base of rice or greens, their poke (tuna, salmon or tofu in marinade or “naked”) and sauce (sesame vinaigrette, wasabi, yuzu ranch). They also have four house bowls, such as the Aloha (with pineapple, cucumber, scallion, jalapeno, onion and sesame vinaigrette with choice of protein and greens or rice). Add-on ingredients are available, too.

Transformations are on the way for the former Hybrid Lounge (707 E. Brady St.). Salvatore “Sam” Sivilotti‘s proposal for the space is three-fold, with a 24-hour coffee shop, a beer garden/cafe and “a walk-up window for butterburger purchases.” Once approved, Silviotti hopes to open the businesses by the end of the year.

Sivilotti says he plans to have rotating Wisconsin craft beers on tap, and will also serve wines and sangria on tap. The historic lack of windows on the Brady Street facade puzzled him. It may be due to the fact that the broad wall, facing the Holton Viaduct, was more suited as a billboard, as shall be revealed when the vinyl siding is removed, exposing, after decades, a painted sign reading “Peacock Lounge.” Sivilotti says he hopes to preserve the artifact which, unfortunately, lies where the proposed windows are to be cut into the facade, and might require some creative carpentry to be saved. The windows will help to bring light into the place, which was not a priority in the Peacock Lounge days. They should also considerably increase the building’s attractiveness and desirability.

It looks like a cafe will be one of the businesses opening inside the Sherman Phoenix complex rising from the former BMO Harris Bank building. Owners JoAnne Johnson-Sabir and Maanaan Sabir plan to open Shindig (3536 W. Fond Du Lac Ave.), which will occupy one corner of the building’s first floor. Johnson-Sabir and Sabir currently own Juice Kitchen (1617 W. North Ave.). Unlike Juice Kitchen, Shindig will have more room for dining and an option to order food.

The cafe…will serve house-made sandwiches, soups, salads and bakery items sourced from local bakers, including Colectivo Coffee’s Troubadour Bakery. The cafe will serve Colectivo Coffee and, of course, juice from the Juice Kitchen…

Much of Shindig’s food will be made by Maanaan, which Johnson-Sabir said, will allow him to use his culinary skills in a broader way than he can at the Juice Kitchen…

The cafe space, positioned to face Fond du Lac Ave., will be renovated to feature an outdoor seating area, a four seasons room, and a retractable garage door that will open to the building’s exterior garden.

Johnson-Sabir says Shindig will be an “anchor” in the Sherman Phoenix project. Helmed by a group that includes Johnson-Sabir, the project is an effort to bring small businesses into the the BMO building, which was “burned during civic unrest in 2016.”

Up-Down MKE (615 E. Brady St.) will open later than planned, following some obstacles in the building’s renovation. The new arcade bar is now expected to open in late summer or early fall. Owners Joshua Ivey and Sam Summers applied for a liquor license in August, and originally had plans to open in February. Up-Down also operates arcade bars in Minneapolis, Des Moines and Kansas City.

The Journal Sentinel’s Tom Daykin spoke with Ivey about the changes:

In December, a city building permit was issued to renovate the 3,600-square-foot building.

But, once work started, Ivey learned that the building wasn’t in good enough condition to renovate and expand. Most of the building has since been demolished, except for the basement.

“We just kept what we could,” Ivey said Thursday. “Unfortunately, it wasn’t very much.”

The new two-story building will have around 6,000 square feet, he said, and will also feature a two-level patio.

The extra kitchen space will help service takeout and delivery orders and have a storefront entrance for people picking up their carryout pies. The new events room was built to accommodate parties, meetings, live music and community gatherings. It can seat 60 people for sit-down dining.

Pleasant Kafe (1600 N. Jackson St.) has reportedly closed. The business announced the closure via an email sent to OnMilwaukee on March 12.

Lori Fredrech reports on the closure:

Pleasant Kafe, which offered coffee, pastries and tapas, along with wine and beer, opened in the former Dentice Bros. Italian Sauasage shop during the summer of 2014.

The space is currently for lease. Interested parties can contact Gato City Properties at (414) 403-3855 or by email at gatocityproperties@gmail.com for additional information.

Ruby Tuesday, located in the Park Place neighborhood, has closed. The fast-casual restaurant was located within walking distance of Point Burger Bar (10950 Good Hope Rd.) Ruby Tuesday has over 500 locations nationally, and about 40 international locations.

Meyer has the scoop: