The Original Is No Copy Cat

Cozy east side restaurant has good food with unique touches. 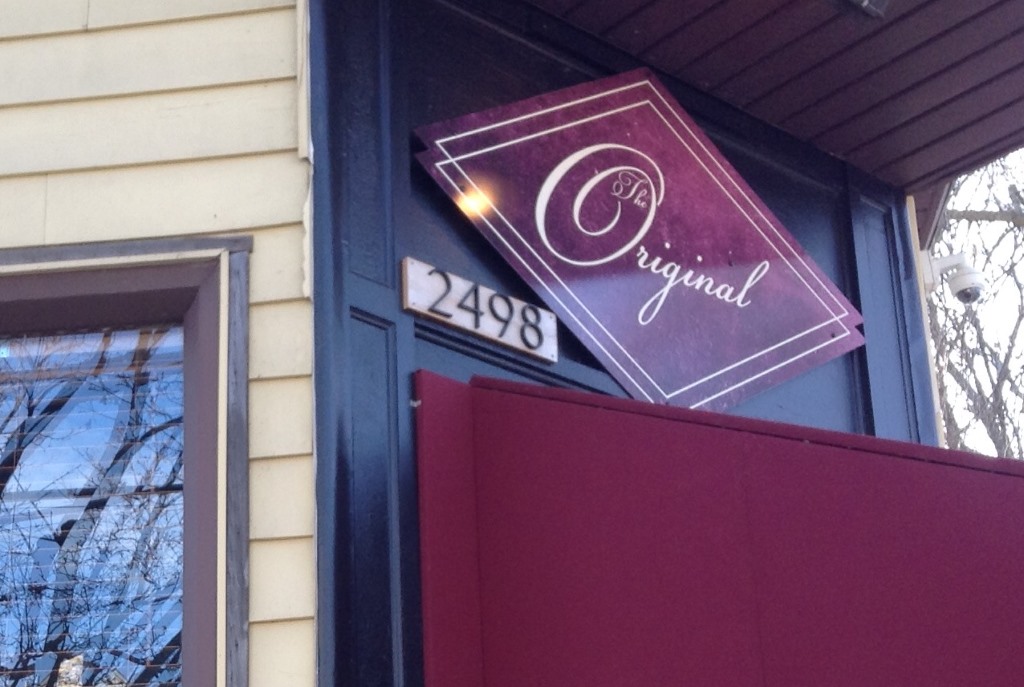 The Original. Photo by Cari Taylor-Carlson.

If you lived on Milwaukee’s lower east side in the 80s and 90s, and you liked pizza and fried eggplant dipped in marinara, you were likely to be a fan of the Calderone Club where Mama Rosa presided. If you were a regular, Mama pinched your cheek before she told you where to sit in her cozy Italian restaurant.

It’s still cozy, has the same corner entrance, the patio out back, and a bar where customers hang with the bartenders, but now, as The Original, it’s gone upscale. It has lovely polished wood tables, cloth napkins, and when we arrived for dinner, wineglasses at each place setting. After the Calderone Club closed, the place had a short life as the Red Dot restaurant and bar, until last year when it reopened as The Original, under the ownership of business partners Eric and Jennifer Rzepka and Eric’s brother, Craig Rzepka.

When we came for dinner we found a relatively brief menu, seven starters and seven entrees. We were tempted by the Bone-in-Pork Chop with sweet potato puree, one sauerkraut pancake, and grilled broccolini, and though we were not looking for a plant-based meal, Wild Rice with smoked tofu, golden beets, red cabbage, and grilled baby carrots, sounded almost too unusual to pass up.

While we contemplated the entrees, our server brought a small dish of pickled green beans, baby carrots, and one Brussels sprout, a different starter instead of the usual bread basket. The sweet-sour, puckery veggies opened our taste buds to what would come next.

We settled on Cornish Game Hen with fried farro, sweet potatoes, and Brussels sprouts, and Beer Braised Pork Cheeks with spaetzle. The juicy meat on the bone-in hen, salty but not overly salty, came on a bed of farro with the veggies mixed in. They had been roasted, which gave them a sweetness to offset the salty meat. The farro, chewy, full of rich flavor from arugula pesto, was further embellished by a Good City Pils gastrique, adding a sweet-sour boost to the dish.

The Pork Cheeks, rich, silky, impossibly tender, sublime in their porky flavor, barely needed a fork. Having been served chewy, almost inedible pork cheeks in Tuscany, these cheeks surprised me. So, why did I order them? Curious. Add spaetzle to the dish with red onion jam hiding underneath, plus mustard crème fraiche with caraway, and you have a dish that pops with multiple layers of flavor to contemplate in every bite. It was genius. Kudos to the chef who took a part of the pig often discarded and transformed it into a memorable entrée.

We finished with Panna Cotta and a dessert our server called Chocolate Cheesecake. The creamy panna cotta hinted of citrus, while tart cherries layered on top contrasted with the sweet rich pudding-like dessert. The graham cracker crust, the base for the cheesecake, tasted like a buttery sugar cookie, raspberry coulis balanced the dense rich chocolate, and crème fraiche mellowed the intense flavors. Like everything else we ate at dinner, we gave it five stars.

On a return visit for Sunday Brunch, the Veggie Breakfast Bowl won the day. Two sunny-side-up eggs topped a bowl of farro with mushrooms, Brussels sprouts, sweet potato, arugula pesto, and red onion, all mixed into the grain. The farro tasted familiar, probably because it was the same chewy farro we had at dinner. Very smart: remove the Cornish Hen, add two eggs, call it brunch.

The Bradford Griddler was an unfortunate surprise. The menu read “French toast battered English muffin bread,” plus choice of meat, syrup, a fried egg, and oddly, salad or fries. What we got had no resemblance to French toast. They made it into a sandwich, hence the Griddler, I suppose. The cinnamon crust came off the top of the bread when I tried to eat it and the sausage, seasoned with onion, garlic, maple syrup, and sage, according to our server, had an off taste. It was neither attractive nor tasty.

We arrived for brunch at the same time as a group of 16. Despite this unexpected crowd, two servers carried on with pizzazz. We were impressed by their calm as they scrambled to accommodate this large group. We got our order in to the kitchen ahead of them, but, they got all the house-made doughnuts. We smelled sugar and cinnamon and everything we love about doughnuts while we watched our server deliver them to an adjacent table. Next time we won’t wait so long to order our breakfast dessert. We had serious doughnut envy! 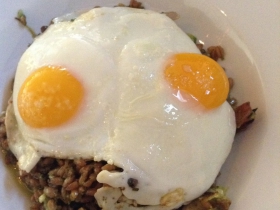 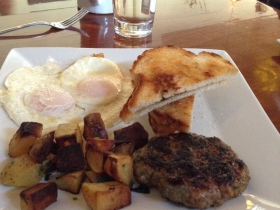 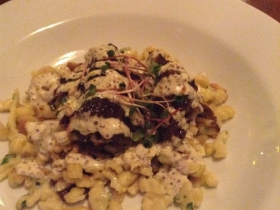 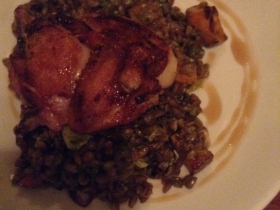 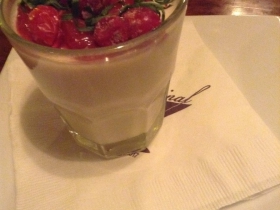 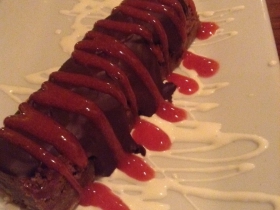 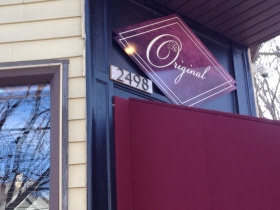 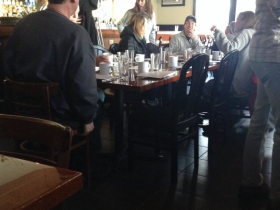 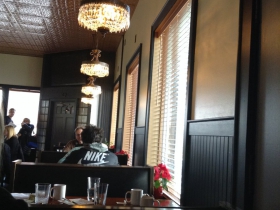