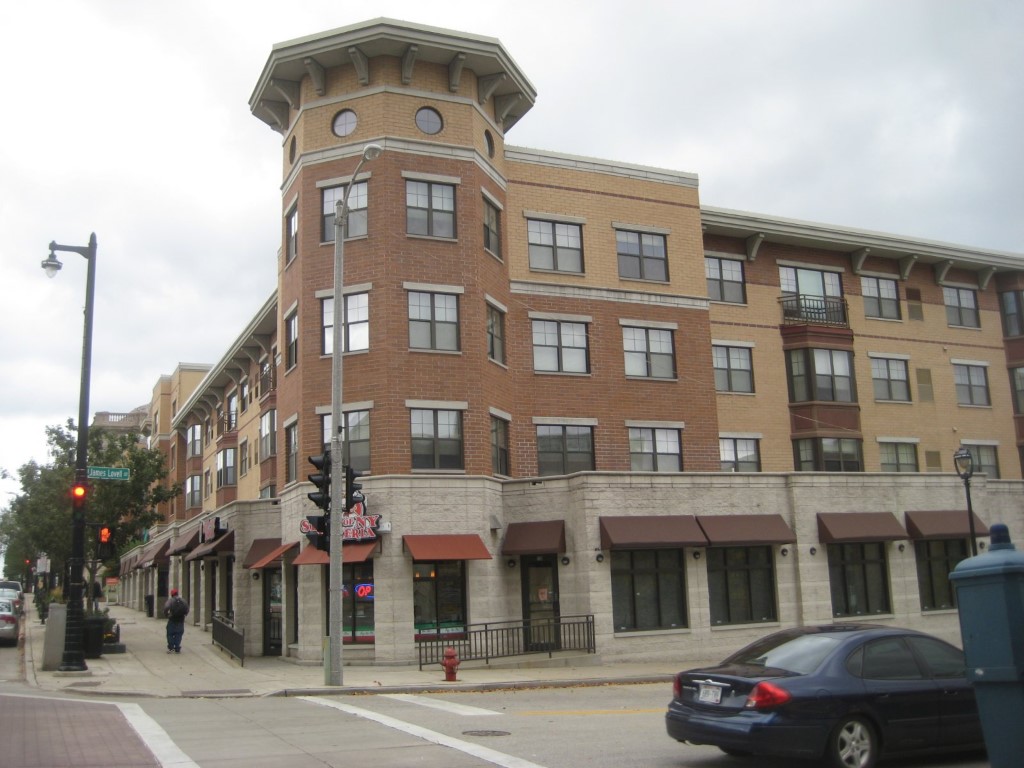 A new Mediterranean and Middle-Eastern spot is planned to open downtown within the next few weeks. Owner Omar Amin hopes to have Gyro MKE (700 W. Wisconsin Ave.) up and running by March. The new fast-casual restaurant is kitty-corner from Amin’s other operation, BB’s (Build-a-Breakfast/Build-a-Burger) located at 633 W. Wisconsin Ave.

The restaurant will serve a variety of items including gyros, shawarma, falafel, kebabs and beef, and a variety of Mediterranean salads (priced $6-10). There will also be build-your-own options allowing guests to choose a base of pita, rice or salad. From there, they can add customized proteins and toppings.

All dishes will be made fresh in-house, including the venue’s shawarma, which features seasoned chicken or steak that’s layered onto a spit and grilled via rotisserie.

Oak Barrel’s chef will be Zach Zarling. Carol Deptolla of the Journal Sentinel details some of the fare:

Zarling’s menu incorporates influences from the East Coast, South and Midwest, such as pimento cheese ($8.95), crab dip ($9.95) and cheese curds fried in whiskey batter ($9.95) among appetizers.

The menu has smashed butter burgers (starting at $8.95) and other sandwiches, including shrimp po’ boy with harissa mayonnaise ($11.95).

Tacos, with fillings such as Nashville hot chicken ($8.95 for two), can be turned into brown-rice bowls. The menu also lists entrees ($10.95 to $12.95) of beer-cheese mac and cheese, fried chicken, fish fry and chicken pot pie.

Vegetarian and vegan options include the plant-based Impossible burger ($15.95) and jackfruit “carnitas” tacos ($8.95).

Opening hours will be 3 p.m. Monday and Tuesday, 11 a.m. Wednesday to Friday and 10 a.m. Saturday and Sunday. The kitchen will close at 11 p.m. Sunday to Wednesday, and midnight Thursday to Saturday. The rest of the bar will close at bar time daily.

As for the opening menu, it will feature a varied selection of baked goods including breakfast muffins (raisin bran, PB&J, banana walnut and cornmeal served with blackberry jalapeno jam) for $3 each; breads in flavors like lemon blueberry loaf, coffee cake and banana chocolate ($2.50 per slice); and both sweet (peach almond) and savory (cheddar scallion) scones ($3 each)…

Other sweet treats will include O’Henry or Take Five candy bars ($6), maple walnut cheesecake (vegan, $6), confetti cake ($3 per slice or $20 for an 8-inch cake) and a variety of pies including speculoos pear, chocolate derby and honey apple cheddar ($3.50 per slice or $25 per pie)…

The bakery’s offerings, Latin Monagle says, will be ever-evolving… Beginning sometime in March, she says they will add grab-and-go salads, sandwiches and soups.

Upon opening, Batches will be selling a limited number of housemade truffles. Patrons looking for Valentine’s Day gifts can choose from white, milk and dark chocolate. The truffles will be sold at $3 for a pair and $6 for four.

Last month, news broke that Caravan Hospitality Group CEO Mike Eitel plans to turn the former Blackthorn Pub (750 N. Jefferson St.) into a sports bar by the name of SportClub. Now, more details about the bar and its opening have emerged. Eitel says that the menu was inspired by his kid’s favorite international street foods, along with foods served at international stadiums. The current plan is to have SportClub open by March Madness.

The drinks will be varied, including not only 30 tap beers but craft cocktails, champagne cocktails and a mimosa menu. The kitchen’s responsibilities are serving lunch, dinner and weekend breakfast – and staffing the order/pickup windows at the concession stand (yes, they’re calling it concession-style food) for lunch, happy hour and late-night carryout. The tenor of the menu is handheld street foods – “domestic favorites to global items,” per the press release.

Eagle Park Brewing Company‘s proprietors Jake Schinker and Jack and Max Borgardt have purchased the former Like Minds Brewing Company site (823 E. Hamilton St.), and plan to open at the new location, and close their Bay View location by the end of March. At 5,000 square feet, the new space will allow the company to expand its services, such as the addition of a full-food menu curated by Chef Nathan Heck. All production will be in-house, and will include 10 new fermentation tanks and a canning line. Other plans include an expanded beer portfolio, a barrel-aging program and an outdoor beer garden.

The announcement was made through a recent press release, which previews Heck’s menu:

Chef Nathan Heck will bring his unique culinary talents to the taproom’s tables. Heck, who honed his skills at Braise and through his own Factotum Custom Catering company, prefers to use fresh, responsibly grown local ingredients in his food, and will incorporate beer into his food as much as possible. “We came to know Nathan while we were both tenants at the Lincoln Warehouse, and we share a mutual love of music, food and beer, so it was a perfect fit for us,” Max said. “Nathan’s creations will complement our beers, and enhance our patron’s taproom experience.”

Eagle Park’s operations at the Lincoln Warehouse in Bay View will remain open into March.

A new restaurant could be opening near the East Pointe Market Place, though the proposed location is the home of an establishment that is still open.

While much of the details are still under wraps, the Business Journal’s Melanie Lawder has the basic story:

Gordon Lugauer, president and CEO of Board Game Barrister, has filed a liquor license application to open a new tavern called Oak and Shield Gaming Pub at 600 E. Ogden Ave. The planned eatery would take over the space housed by Karma Bar & Grill, a 10-year-old sports bar and eatery that is currently open.

It would feature console, board games and trivia, along with other entertainment, according to the application.

Along with a clearance warehouse in South Milwaukee, Board Game Barrister has game stores open in Mayfair mall, Bayshore Town Center and Greenfield Towne Center.

Urban Beets Cafe & Juicery (1401 N. Dr. Martin Luther King Jr. Dr.) expanded its space and services in November, and is expecting even more changes in the coming year. The “plant-based cafe and juice bar” has plans to open a second location in Wauwatosa this summer, according to a post on the business’s Facebook page.

Fredrich reports on the proposal:

Plans for the new 1,600-square-foot cafe proposed for the first floor of the Mayfair Health and Professional Building at 3077 N. Mayfair Rd., will go before the Wauwatosa Plan Commission for a conditional use permit on Monday, Feb. 12.

Yokohama (1932 E. Kenilworth Pl.) officially closed Sunday night. The restaurant, known for ramen and karaoke, opened in May 2017. In December, Chef Matt Kerley initiated a new menu for the restaurant.

“We appreciate the businesses that welcomed us to the East Side and are happy to have made new friends,” they said in a statement. “We are thankful to all of our staff and the hard work they put in as we continue to grow in the SED organization. We appreciate the ramen and karaoke faithful. We hope to see you again at our other establishments. Stand Eat Drink Hospitality has opportunities to pursue growth while we continue welcoming Milwaukee and Wisconsin guests through the doors of all our establishments.”