And another $1.4 billion somewhat related to job creation.

By Tamarine Cornelius, Wisconsin Budget Project - Jan 31st, 2018 12:14 pm
Get a daily rundown of the top stories on Urban Milwaukee

An updated calculation of the public assistance provided to Foxconn shows that the costs have risen as high as $4.5 billion when multiple forms of assistance from state government, local governments, and utilities are included. This letter from the Legislative Fiscal Bureau describes the various categories of Foxconn public assistance.

This comprehensive accounting of public costs allows us to more accurately identify how much each new job created by Foxconn will cost to taxpayers. With an eventual employment target of 13,000 jobs at Foxconn, the cost per job would be $344,000 ($4.5 billion cost divided by 13,000 jobs). Governor Scott Walker has said that the economic activity engaged in by Foxconn will indirectly create another 22,000 jobs outside of Foxconn. Adding those jobs into the calculation would change the cost to $128,000 per job ($4.5 billion cost divided by 35,000 jobs). However, these cost-per-job figures assume that Foxconn meets all employment goals; if Foxconn employs fewer than 13,000 workers, or if some of the 22,000 other jobs are outside Wisconsin, the cost per job will be higher.

Proponents of the Foxconn deal have justified the large cost of the assistance package by pointing to the number of jobs the company could bring—but more than a third of the public assistance to Foxconn (36%) has no direct connection to job creation. That assistance, which totals $1.6 billion in coming years, includes:

Another 34% of the assistance to Foxconn, amounting to $1.4 billion, is somewhat related to job creation. This amount takes the form of payments to Foxconn to partially pay for construction and equipment costs of its factory. These payments to Foxconn are reduced if the company does not hit a specified percentage of the main jobs target, with the percentage ranging from 25% in 2019 to 65% in 2025. For example, although the company anticipates employing 13,000 workers by 2022, Foxconn could still receive the maximum capital investment payment for that year so long as it employed at least 5,200 workers (40% of 13,000). In addition, Foxconn would need to hit specified capital investment targets to receive the maximum investment credits.

The smallest portion of the assistance to Foxconn is the 30% that is directly related to job creation. This includes up to $1.5 billion in payments to Foxconn to defray payroll costs over the next fifteen years. It also includes $20 million for the state to provide grants for worker training. 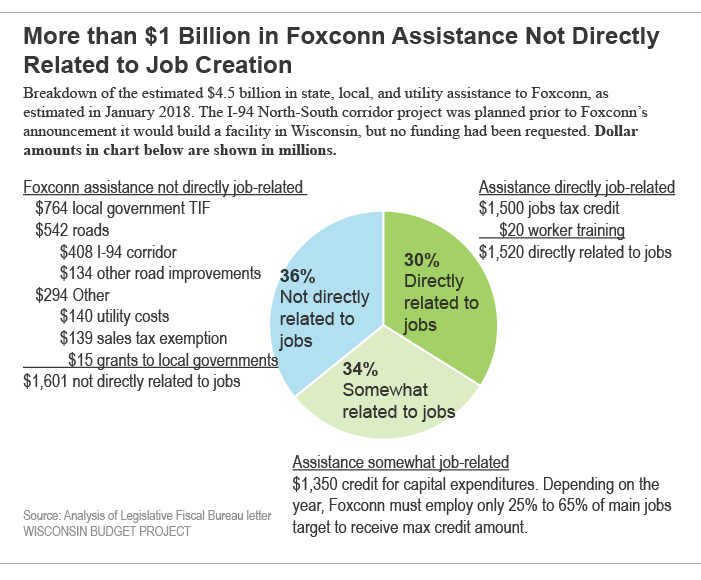 Much of the state assistance will take the form of checks sent to Foxconn, rather than reducing Foxconn’s taxes. That’s because Wisconsin’s tax laws have a special tax break for manufacturers that allows them to pay nearly nothing in state income tax. Even without the assistance package, Foxconn would have next to no state income tax liability, so the credits for capital investment and employment would have little value unless they take the form of state money sent to Foxconn.

Wisconsin is putting billions of dollars of public money at stake on a single, enormous project. There is no way to know for sure at this point how many people Foxconn will employ or how long the factory will be operational. But what is clear, at this point, is that the $4.5 billion in public money that state and local governments are spending to benefit Foxconn represents resources that will not be available to invest in Wisconsin’s K-12 schools, university system, or communities.