The Return of George Washington

President George Washington is once again is keeping a watchful eye over W. Wisconsin Ave. The nearly ten-foot-tall, bronze statue has been restored and placed back on its pedestal in the median of W. Wisconsin Ave. near N. 9th St.

Designed by Richard Henry Park, the 3,000-pound statue was given to the city in 1885 by Elizabeth Plankinton. Considered by many to be Milwaukee’s oldest public monument, Washington looked east towards the heart of Downtown for more than 130 years before being removed in July 2016.

The statue traveled to Forest Park, Illinois where it underwent a $100,000 restoration at the hands of Andrzej Dajnowski of Conservation of Sculpture & Objects Studio, Inc. Work on the restoration was funded by a variety of sources, including the Milwaukee Arts Board, Westown Association, Milwaukee Downtown, Marquette University, the Wisconsin Club, Zilber Ltd. and We Energies. The Department of Public Works assisted with the restoration of the statue’s base and logistics of reinstalling Washington.

Restored alongside Washington were the mother and child that look upward from the statue’s base. Both are made of bronze and were in need of substantial repair.

The Westown Association is currently leading a fundraising effort to restore two other monuments in the Court of Honor on the Wisconsin Ave. median. A statue of a soldier from the Spanish-American War from 1932 is in need of significant repair. And minor repairs are needed on the Victorious Charge monument from 1898 that depicts four Union soldiers in the Civil War. All donations are tax deductible. 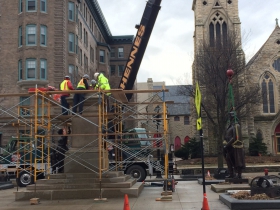 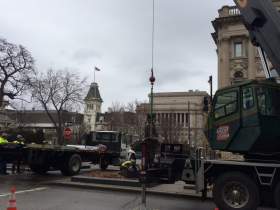 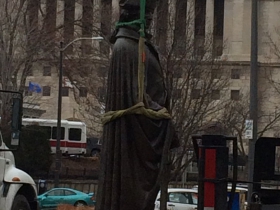 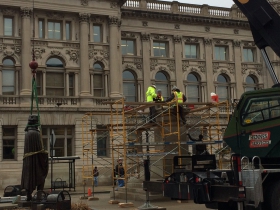 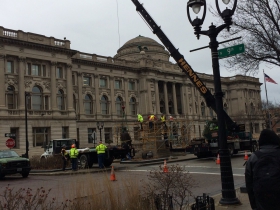 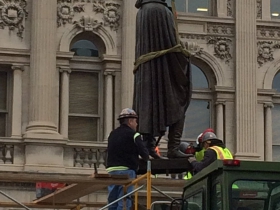 3 thoughts on “Photo Gallery: The Return of George Washington”