As one attendee puts it, “the stakes are too high, I can’t stay home.” 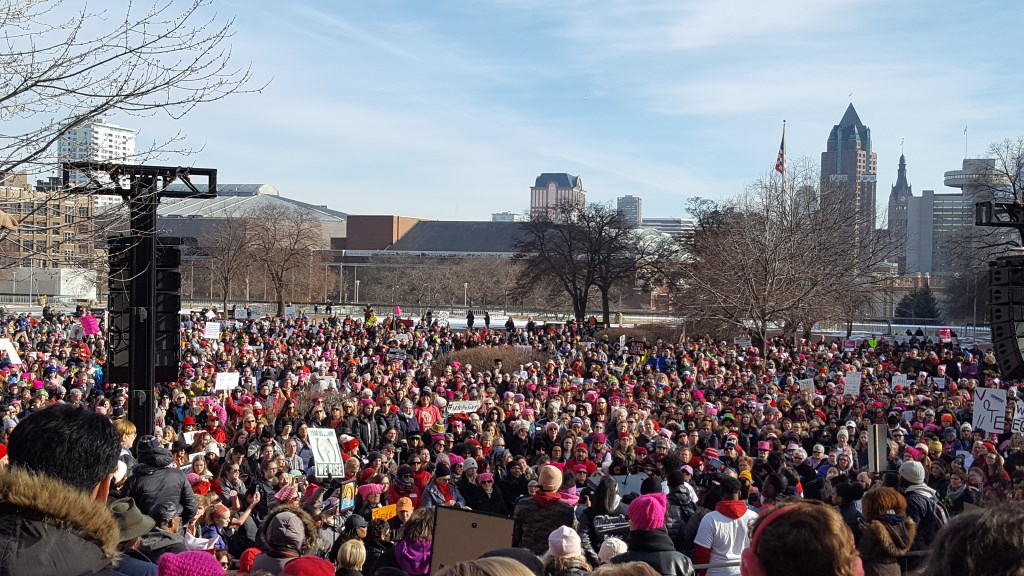 “We must love each other! And support each other! We have nothing to lose but our change!”

These were some of the chants that young speakers from a community organization called Urban Underground used to energize a crowd gathered outside the Milwaukee County Courthouse on Saturday morning to commemorate the anniversary of last year’s Women’s March. This year’s event was called the Anniversary Day of Action, and included a rally at the courthouse, a march to the Wisconsin Center, and an afternoon of workshops at the Wisconsin Center. The Milwaukee Journal Sentinel estimated that 1,500 or more people attended the day’s events, but organizers put the number closer to 3,000. It was coordinated with similar events around the country, and was meant to mobilize the energy of last year’s Women’s March and connect attendees to concrete political actions they could take in their communities.

Attendees included young and old, men and women, black, white, and brown, and many people who had never attended a rally before. Many in the crowd wore their pussy hats for the occasion, and others were adorned with bouquets handed out by a charitable flower company called Flowers for Dreams. The American Civil Liberties Union sent representatives to monitor the event, but the ACLU workers I talked to said they were not allowed to comment.

When asked what motivated her to attend the Day of Action, Elizabeth Lentini of Whitefish Bay said, “The stakes are too high—I can’t stay at home.”

Her friend Deborah Hufford of Mequon offered this view: “This movement has produced some very real results. More women are being elected to offices at all levels of government.”

Speakers at the rally included progressive politicians, representatives from community groups, students, and immigrant rights activists. State Senator Lena Taylor kicked off the speeches, saying “I need women who are doing the work to make a difference,” and encouraged women to take an active role in politics. Wisconsin Supreme Court candidate Rebecca Dallet attended the rally and spoke about the importance of fighting domestic violence and human trafficking, and advocating for electing more women to office. Other political speakers at the rally included aldermanic candidate Tomika Vukovic from Glendale, state assembly candidate Emily Siegrist from Mequon, and state assembly candidate Erica Flynn from Greenfield. Organizers said that U.S. Senator Tammy Baldwin had hoped to attend the rally, but was in Washington to work on negotiations following the federal government shut-down.

Speakers representing community organizations included Nancy Yarbrough of Fresh Start Learning (a non-profit that works on domestic violence and human trafficking prevention), Lisa Jones of UBLAC Milwaukee (which does organizing in the black community), and Kailee Evans of LGBTQ advocacy group Diverse and Resilient. Young people were represented by youth journalists from Urban Underground who talked about their community interview project, and by an eighth grader named Zion Rogers. Rogers founded a group called the Northstar Action and Culture Committee, which focuses on issues facing youth of color, like sexual assault and racial inequality.

Sarah Pearson, who is state co-chair of the Day of Action, told the crowd, “There is no feminism that does not support immigrant women.” Mayra Jimenez from Voces de la Frontera gave a stirring speech about her experience as a DACA recipient and college graduate, saying that “Women are the wall.” The final speaker was indigenous rights advocate Colleen Kennedy, who was involved with the protests at Standing Rock. Kennedy said, “The women’s rights movement does not pay enough attention to native women,” and called on attendees to “channel the energy of the women’s march into concrete wins.”

At the end of the speeches, the crowd began walking towards Wisconsin Avenue to the tune of Beyoncé’s hit, “Who Runs the World? Girls!” The group slowly marched along, past the Central Library and towards the Wisconsin Center with chants including, “Power to the polls!,” “The Rise of the woman is the rise of the nation!,” and “Show me what democracy looks like! This is what democracy looks like!” The mood seemed upbeat and energetic, and cars along the way honked, mostly in solidarity. At one point along my walk, a driver whipped past while shouting “Go back to the kitchen!” At that moment, I was surrounded by a group of high school students, and they all seemed taken aback.

Once we arrived at the Wisconsin Center, there was a large ballroom filled with booths representing various community organizations, including the ACLU, Sixteenth Street Community Health Centers, Vote Riders, Supermarket Legends (which signs up new voters), Black and Pink Milwaukee, Disability Rights Wisconsin, Project Hope, Voces de la Frontera, Planned Parenthood, and the Victory Garden Initiative. Another ballroom was set up for trainings and seminars led by community organizers and representatives of these groups. This part of the event was meant to connect marchers with concrete actions and ways to stay politically involved throughout the year.

Reactions to the day’s events seemed overwhelmingly positive from those who took part. I spoke to two attendees from Sheboygan, Nancy Verhey and Carol Christensen. Christensen had never attended a march before, but wanted to “come together to voice the need to respect each other.”

Verhey put it more dramatically: “With the darkness of the Trump administration,” she said, “all these lights are coming out.” 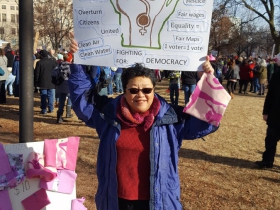 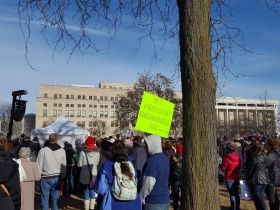 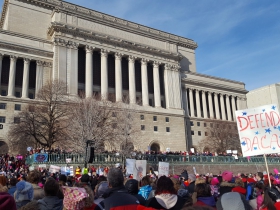 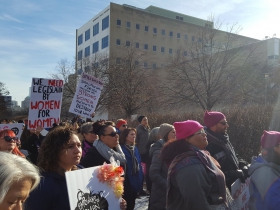 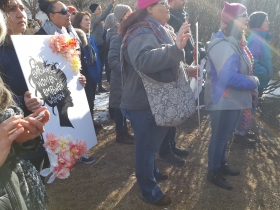 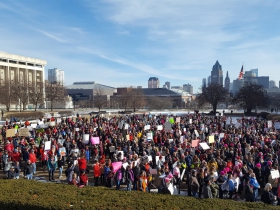