By Tamarine Cornelius, Wisconsin Budget Project - Dec 6th, 2017 01:04 pm
Get a daily rundown of the top stories on Urban Milwaukee

Both versions of the federal tax bill currently under consideration expand the already-significant ability of extremely rich families to keep wealth within their own circles, a move that would contribute to the widening chasm between the very wealthiest and everybody else and would place additional obstacles to economic security in the path of families of color.

New figures point to the degree to which a growing amount of the nation’s resources are held by a select few. In 2016, 39 cents out of every dollar of wealth was held by the top 1 percent, according to the newest Survey of Consumer Finances, released this fall by the Federal Reserve Board. That amount is up from 30 cents a quarter-century ago.

Growing levels of wealth inequality block access to opportunity for those not lucky enough to be born to the top 1 percent. On Inequality.org, Chuck Collins describes how:

“The story goes like this: as wealth inequalities grow, two things happen that undermine equality of opportunity.  First, affluent families help their kids in dozens of ways to get a leg up in preparing for school, getting into selective colleges and launching decent paying careers.  They pull further and further ahead…

Secondly, extremely unequal societies historically disinvest the public sector and the social investments that give non-affluent households opportunities, such as 0-6 preschool, decent K-12 education and access to college or vocational skills.  Those who are not fortunate enough to have wealthy parents lose some of the tools needed to advance up the economic ladder.”

Families of color are especially likely to get caught in this circle, which can largely block them from methods of wealth accumulation that are available to other families. White families have much more wealth than families of color, and while part of that difference is because white households are more likely to be college-educated than African American or Latino ones, even similarly-educated white families hold much more wealth than families of color. The typical college-educated white family had a net worth of $397,100 in 2016, according to the Survey of Consumer Finances. That is more than five times the wealth that a typical college-educated African American family held ($68,200) or Latino family ($77,900). 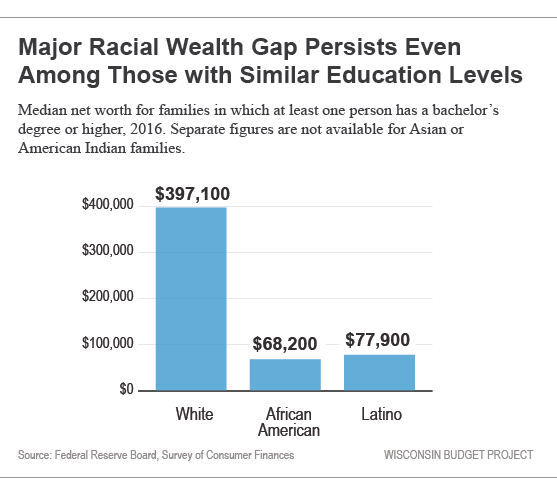 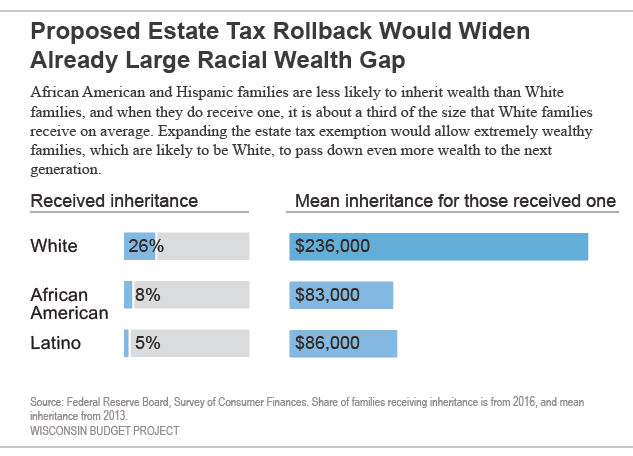 Now Congress is looking to expand even further the ability of extremely rich people to keep wealth within their own families. Currently, a married couple can leave up to $11 million to their heirs without paying an estate tax. In Wisconsin, only 70 estates are estimated to owe estate tax in a year, and 99.9 percent of estates in Wisconsin owe no estate tax at all. The tax plan passed by the U.S. Senate in a nearly party-line vote doubles the exemption level to allow a couple to pass down $22 million to their heirs tax-free; the version of the plan passed by the House of Representatives eliminates the estate tax altogether. Eliminating the estate tax costs $275 billion in tax revenue over ten years — more than the combined cost of funding the Food and Drug Administration, the Centers for Disease Control and the Environmental Protection Agency.

The massive windfall that the extremely wealthy would get from repealing or scaling back the estate tax would allow wealth to become even more concentrated in just a few hands — hands that are likely to be white — and would make it harder for everyone else to climb the economic ladder, especially families of color. It is one more provision in the federal tax proposal, among literally dozens of others, that would limit opportunity, economic mobility, and financial security. This page on the Wisconsin Budget Project site has more about how the federal tax proposals would affect Wisconsin residents.