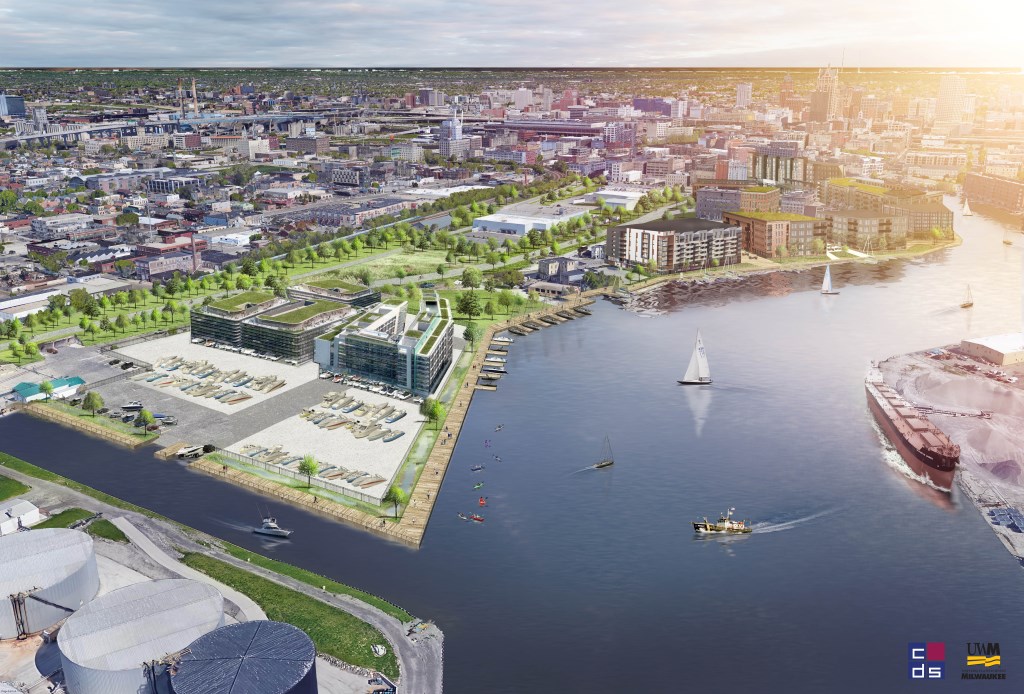 A plan to redevelop 888 acres of Milwaukee’s harbor was presented to the public at an open house on Monday at the new Mitchell Street Branch Library, 906 W. Historic Mitchell St.

The Harbor District Water and Land Use Plan was drafted by the staff of the Harbor District, a public-private partnership coordinated through the Department of City Development. Public comments will be accepted until December 18th.

The plan includes an introduction, seven chapters (many running about 20-30 pages in length) and three appendices. Material covered includes the history of the industrialized area, the first to be so developed in Milwaukee, perceived opportunities for the future, and a number of recommendations for the district at large and for its sub-districts and corridors.

All these topics, covered exhaustively in the plan, which is online, were summarized in a score of display boards mounted in the community room of the 22,000-square-foot library, which opened to the public on October 7th. Staff members from the district and the Department of City Development were on hand to assist with inquiries.

The 100 attendees covered a spectrum of interests, ranging from neighborhood residents to architects, contractors, transit advocates and property owners.

Key Goals Are Many

The plan to create a “21st Century Working Waterfront” includes no less a mandate than to “remake the inner harbor for the next 100 years” and to “build mutually reinforcing ecological, economic and social systems.” Such transformations do not take place overnight, so the plan includes a couple of short-term goals that could be accomplished in relatively short order. These include:

The overlay district would be used as a mechanism for the funding and orderly development of a riverwalk to serve the area, which has nine miles of waterfront. The riverwalk would include numerous public access points for boaters and fisherfolk. Funding is generally split between the city and the adjoining property owner. Construction is generally done incrementally, as various properties are redeveloped. A number of unused railroad spurs have already been removed in the district, while a number remain, in addition to some active spurs. 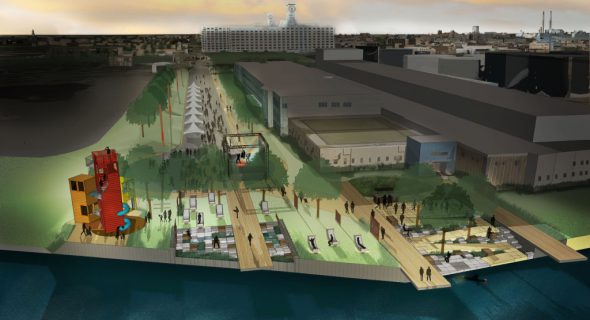 SLOSH Park, a design collaboration between Ayres Associates and Quorum Architects, would be located at the foot of E. Greenfield Ave., adjacent to the UW-Milwaukee School of Freshwater Sciences. The park would pay tribute to and utilize the seiche effect, in which the water level can rise or fall precipitously and quite suddenly. (This is the phenomenon noted when a river appears to flow upstream.) Construction of the SLOSH park is expected to commence in Spring, 2018, although funding is not yet complete.

A medium-term goal would be to identify and develop further park and public land in the area, along with preserving the final remaining 6.5 acres of what had been a 1,000-acre rice marsh and wetland before its industrial development, which commenced nearly 200 years ago. Longterm goals include the redevelopment of S. 1st St., and the eastward extension of E. Mitchell St. to better access the sprawling Milwaukee Solvay Coke site, now being remediated by its new owner (and old polluter) WE Energies. The site is expected to be fully remediated over the next two years, said Lilith Fowler, the Executive Director of the district. Another longterm goal is the development of transit infrastructure so that no part of the district would be more than a quarter mile from a transit stop (Jones Island excluded).

Future Uses for the District

The plan envisions that about 19 per cent of the land area of the district is suited for light industrial activities, which should bring 22 jobs per acre. An existing example of such a use is found on S. Barclay St., where Foamation, the makers of Cheesehead novelties, is located.

Commercial uses, which bring about 75 jobs per acre, would occupy about 18 per cent of the land area. The recently opened Cermak Fresh Market is an example of such a use. Transportation and utilities will account for 40 per cent of the area, led by the Port of Milwaukee, the Jones Island Treatment Plant of MMSD, fuel storage, salt piles and similar existing uses. Housing would account for much of the remainder, with a preference for multi-unit structures.

In all, the plan envisions $864 million in property development and 5,663 new jobs in the area. 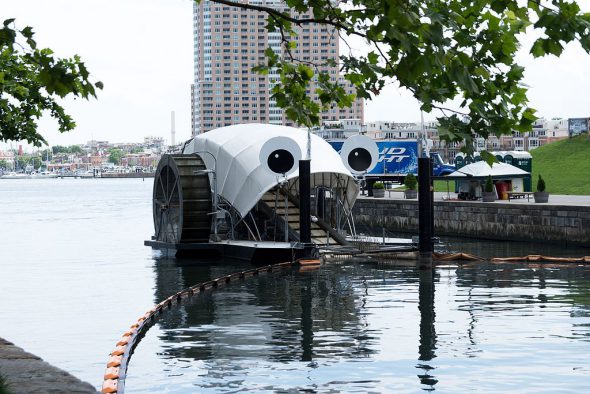 Among the catalytic projects listed for the plan is a “Trash Wheel,” which is to be installed near E. Becher St. Flotsam on the Kinnickinnic River would be funneled into the wheel, a sort of conveyor belt, that would lift the debris directly into a Dumpster. A prototype, now operational in Baltimore, includes a pair of googly eyes, and is known popularly as “Mr. Trash Wheel”; see Urban Milwaukee’s past story on this.

A Word from the Alderman

Ald. Jose Perez was in attendance, visibly proud of the new branch library, the largest in the MPL system. Its massive construction could not have been duplicated within budget in a new building, he said, adding that the city got “a bang for its buck.” He said a “lot of time and energy” went into the Harbor District plan, and that he was impressed with its recommendations.

The public is invited to comment on the plan until December 18th, at this link: comprehensiveplans@milwaukee.gov .

Following the comment period, the plan will be presented early in 2018 before the City Plan Commission for its action. The matter would then come before the Zoning, Neighborhoods and Development Committee of the Milwaukee Common Council. If approved by the committee and the full council, the plan would be enshrined as part of the City of Milwaukee master plan. 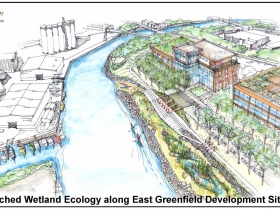 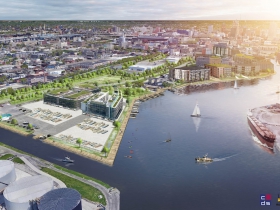 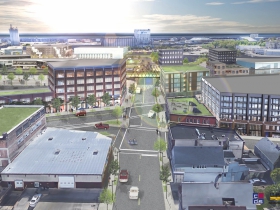 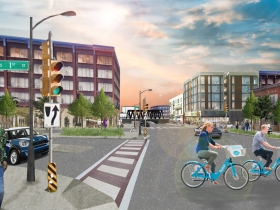 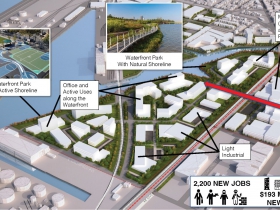 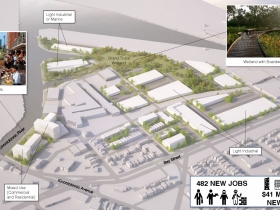 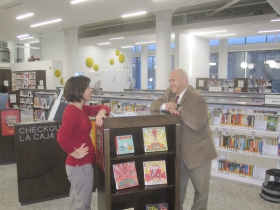 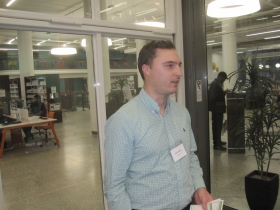 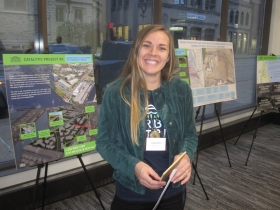 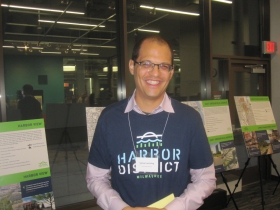 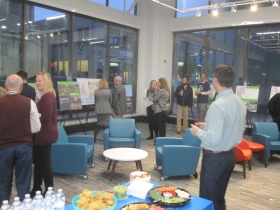 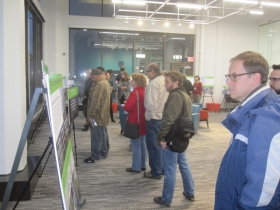 One thought on “Plenty of Horne: Harbor District Plans Unveiled”