Can Trash Wheel Clean Up Harbor? 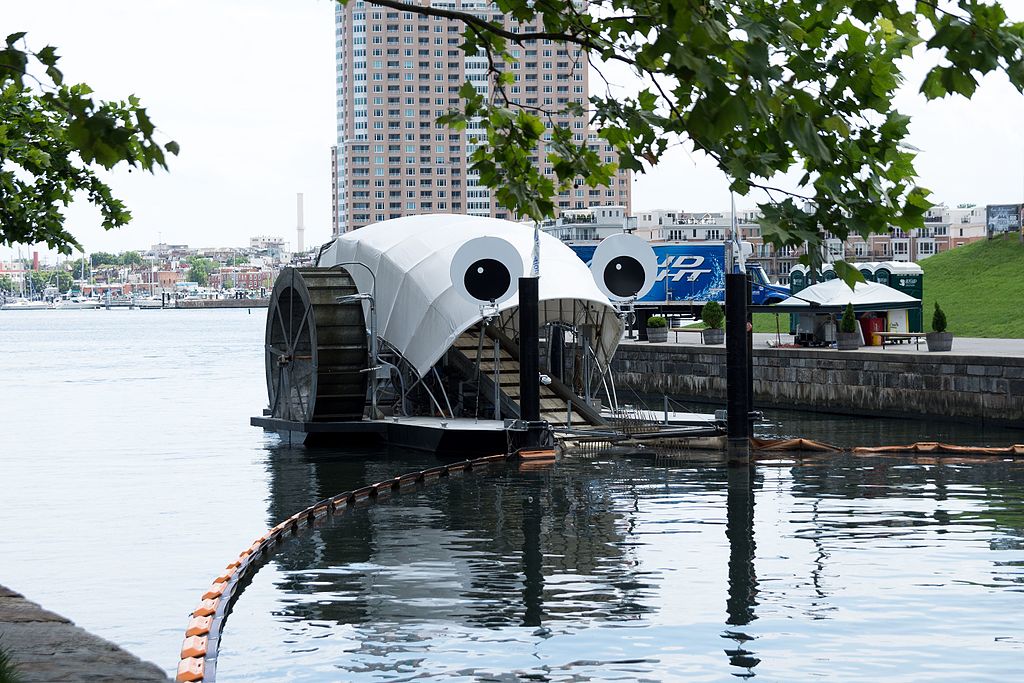 Perhaps because there are two eyes painted on the contraption, the waterfront trash collector in Baltimore is called “Mr. Trash Wheel.” The unique creation is solar- and hydro-powered and has been collecting trash from the Jones Falls River in Baltimore since May 2014. To date, Mr. Trash Wheel has collected over a million pounds of trash, to great local acclaim.

So much so that “Professor Trash Wheel,” a second collector, was installed in December 2016 at the end of Harris Creek, and a new trash wheel is now planned for the Gwynns Falls area, which would be the third in Baltimore.

The trash receptors use the river’s current for power, and solar panels when the current is not strong enough. The trash wheels extend floating booms that funnel trash from the river up to rotating forks that sort the trash and move it onto the conveyor belt. The contraption’s two water wheels power a conveyor belt that carries the trash up to a dumpster.

The Trash Wheels have significantly improved the cleanliness of the Jones Fall River and Harris Creek. The creator of the Trash Wheels, John Kellett, has been looking internationally for more places to install a similar device. “Kellett, now with a construction company to build the wheels, has done site surveys in Lombok, Indonesia, Panama City, Rio de Janeiro, and stateside in Honolulu, Milwaukee, Atlanta, and Denver,” National Geographic reports.

Milwaukee representatives met with Kellet to discuss a possible installation of a Trash Wheel on the Kinnickinnic River in November 2016, according to Lindsay Frost, Manager of Water Projects for the Milwaukee Harbor District. The district’s borders are generally south of the Third Ward, east of Walker’s Point and north of Bay View, encompassing 1,000 acres and 44,000 linear feet of water frontage.

“Our organization has been in communication with the organization running the Trash Wheel efforts in Baltimore, and we’re exploring the possibilities further,” Frost says.

Frost notes the advantages of Mr. Trash Wheel: “One of the things that’s really great is the Trash Wheel is very engaging. It does collect a lot of trash over in Baltimore, but it also serves as an attraction point and a reason for people to engage with the rivers again, which I think could be a benefit here.”

As it happens, Milwaukee already has a waterfront trash collector with a cool name, the 50-foot long river skimmer called Lynyrd Skymmer — a clever play on the southern rock band, Lynyrd Skynyrd, which was the result of a 2011 naming contest. (Way to go, Milwaukee!) The Skymmer, owned by the Milwaukee Metropolitan Sewerage District (MMSD), pulls out trash from the Milwaukee, Menomonee, and Kinnickinnic Rivers. It has a captain and two crew members that work an average of 110 days a year, collecting trash and making a safer path for boats.

The skimmer collects all kinds of trash, from tree limbs to barricades, and the occasional porta-potty. Each year, it collects around 70, 20-cubic yard dumpsters worth of trash and debris, but the installation of a Trash Wheel could improve efforts further.

“I think anything that helps clean up garbage and helps keep the rivers free of debris that can damage kayaks and boats and everything else is a benefit,” says Bill Graffin, Public Information Manager for MMSD.

“We want not only quality of life for people who live here to be improved, but we also want tourists and visitors to have a positive first impression of Milwaukee and the waterways,” he adds.

The MMSD pays the Veolia company just over $139,000 a year to operate the river skimmer, pretty similar to the reported annual cost for Mr. Trash Wheel’s operation, of about $129,000. (Though we don’t know how many days of the year the Baltimore skimmer is operated.)

But the trash wheel itself has a hefty price tag. Professor Trash Wheel, that latest one built, cost more than $550,000. Milwaukee’s river skimmer was purchased for $415,750, according to Graffin, though in current dollars that’s at least $457,000.

But in Baltimore they love Mr. Trash Wheel and how it has collected more than one million pounds in trash, so organizations such as the Maryland Port Administration, the National Aquarium, local businesses, and others chipped in to help pay for Professor Trash Wheel.

According to Frost, the Harbor District is still determining the fundraising and cost aspects for a possible trash wheel: “It could be a potentially viable option. There would be a lot of additional planning that would need to be done, though.”

5 thoughts on “Can Trash Wheel Clean Up Harbor?”