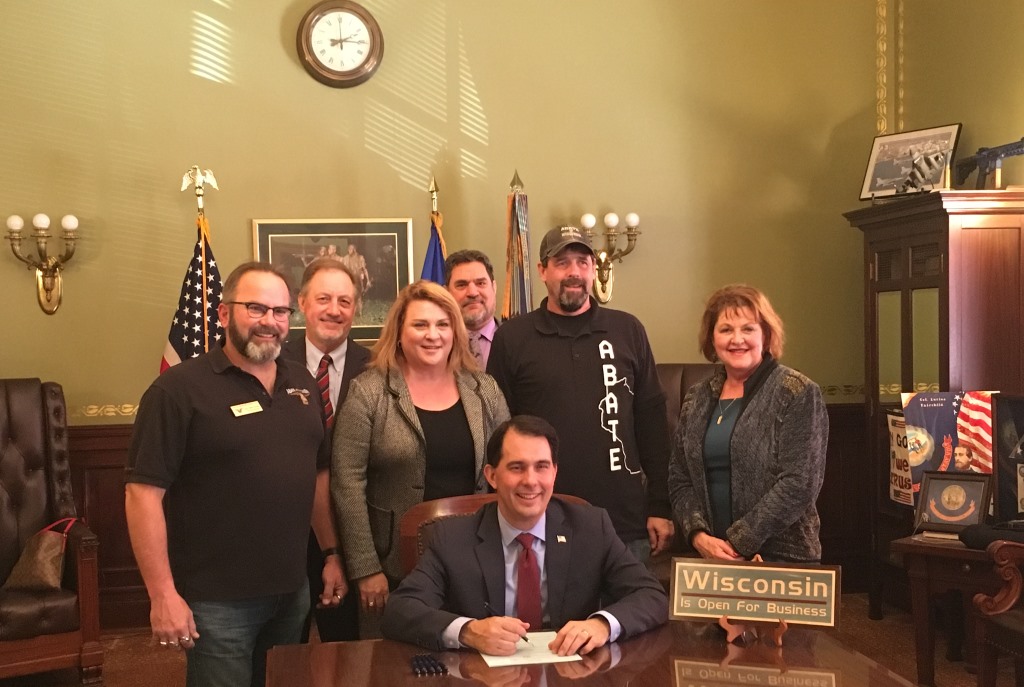 Rep. Janel Brandtjen stands behind Gov. Scott Walker as he prepares to sign AB-201. The Bike Fed’s Dave Cieslewicz is behind her and to her left. Photo courtesy of the Bike Fed.

A bill strongly supported by the Bike Fed, which would increase penalties for careless drivers who kill or injure cyclists and pedestrians, was signed by Governor Scott Walker earlier today.

The bill (Assembly Bill 201) increases penalties for a host of moving violations that are of particular concern to vulnerable road users like people who ride bikes and walk. It would apply to things like failure to yield to a bike, pedestrian or electric mobility device in a cross walk, failure to stop at an intersection or failure to yield while turning at an intersection (often referred to as a right or left hook).

And of course all of that is in addition to any civil suit that might come as a result of the violation.

Thanks to so many of you who responded to a Bike Fed Action Alert earlier this month in which we asked you to contact Rep. Janel Brandtjen (R-Menomonee Falls) and Sen. Luther Olsen (R-Ripon), the bill’s primary authors, to thank them for their efforts. While waiting for the Governor, Rep. Brandtjen’s aide said, “Man, you guys really can get turn your members out!”

That’s really important because too often legislators only hear from people who are upset. Too few organizations remember to ask their members to contact legislators when they do something they like, but it goes a long way.

So, thanks to all of you for making your voice heard, thanks to all the legislators who supported this bi-partison bill and thanks to Gov. Walker for signing it into law.