By Jon Peacock, Wisconsin Budget Project - Nov 22nd, 2017 10:48 am
Get a daily rundown of the top stories on Urban Milwaukee

The revised tax bill that emerged from the Senate Finance Committee last week has gone from bad to worse – much worse. A number of respected analysts have calculated that when you look beyond the initial effects of the revised plan, low- and middle-income taxpayers will generally be paying more taxes and will have less access to affordable health care. However, the wealthy and most powerful will enjoy huge benefits.

More specifically, new figures show that 10 years from now – when the amended Senate plan has been fully phased in – the lowest earning three-fifths of Wisconsin taxpayers would pay about $365 million more, while the top one percent of Wisconsinites would save an estimated $201 million that year. 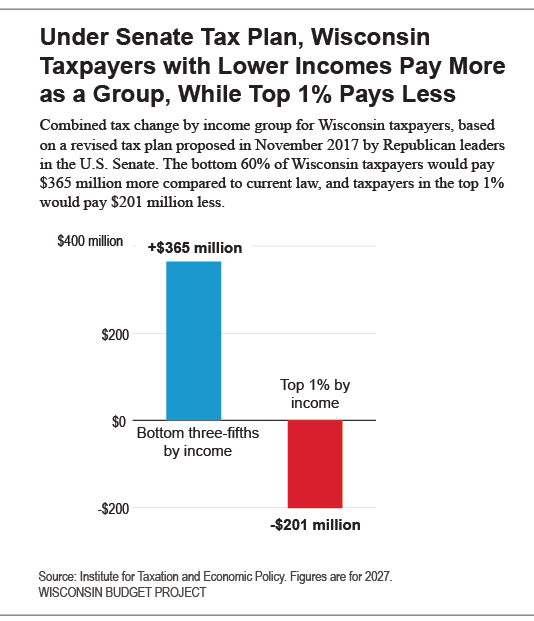 These alarming figures, which were calculated by the Institute on Taxation and Economic Policy (ITEP), reflect two significant changes in the bill:

The changes that would be repealed in 2025 include almost all the cuts in individual tax rates, the increase in the standard deduction and the larger child tax credit, among other things. The permanent changes include the new corporate tax breaks and the use of an inflation measure that would more quickly shift middle-class income into higher tax brackets and gradually make provisions like the Earned Income Tax Credit less generous.

Those changes make the Senate plan an even worse deal for middle and low income Americans than the original bill. In addition to ITEP, other respected groups that analyze tax policy have also concluded that although middle-income Americans would see some benefit in 2019, most would pay more in taxes in 2027 than they do now. And once Congress takes actions to offset the $1.5 trillion increase in federal debt from the bill, the vast majority of Americans will be worse off.

The latest analysis by ITEP provides estimates of the effect of the bill on taxpayers in each state. They concluded that Wisconsin is one of 19 states where the total net impact in 2027 would be an increase in taxes.

The following bar graph illustrates that Wisconsin taxpayers in the bottom three-fifths of earners (those making less than $94,700) would have tax increases averaging from $180 to $200 in 2027, while the top one percent of earners (making more than $693,000) would get an average tax cut of nearly $7,900.

Richest 1% of Wisconsin Taxpayers Receive the Largest Average Tax Cut Under the Revised Senate Plan in 2027, the Average Taxpayer in the Bottom 60% Faces a Tax Hike

The last bar graph shows the effects of the Senate plan (including the ACA changes) calculated as a percentage of income. All three of the graphs illustrate that the Senate Republican plan, like the House plan, would widen the growing divide between the richest Americans and the rest of us.

Experts expect the bill to have little positive effect on the economy. An analysis released this week by the Tax Policy Center concluded that the plan would boost economic growth enough to increase federal tax revenue by about $169 billion over the next ten years – which would only offset 11% of the $1.5 trillion increase in federal debt resulting from the plan.

One reason why the new corporate tax breaks are not expected to have a strong positive effect on the economy is that corporations don’t typically use a tax windfall to add more jobs or increase wages. Although some of the huge savings for corporations will be used that way, more of that funding will go for things like buying back stock, increasing dividends, paying off debt, and automating operations.

Based on past experience, most tax analysts expect stockholders and other investors to be the big winners from the corporate tax cuts, and many  investors live outside the U.S.  Taking that into account, ITEP calculated that foreign investors would get much of the long-term gain from the bill – receiving a net benefit of $22 billion in 2027, compared to a net loss of $18 billion for the bottom three-fifths of income-earners that year.

That is just one of the many enormous problems with the Senate and House tax bills. And it’s one of many reasons why Republican leaders in Congress haven’t held a single public hearing on the bill and are attempting to rush it through both houses before the public starts understanding the consequences of approving such a huge increase in federal debt, at the expense of most Americans.

One thought on “Wisconsin Budget: Revised Senate Plan Hikes Taxes for Many”