The Saukville restaurant seems to serve it every possible way, all good. 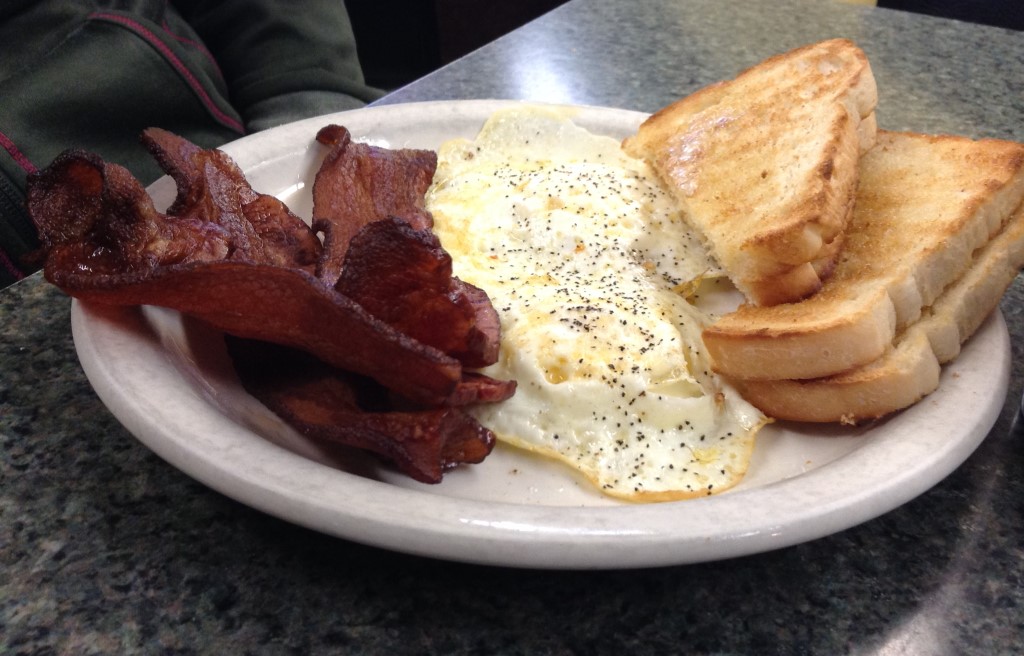 It’s all about the bacon. Photo by Cari Taylor-Carlson.

There’s a reason to travel north on I-43 to the Saukville exit. For all that bacon. It’s the superstar at Rivers Edge Restaurant where they serve it crisp, yet juicy, thick-sliced daily, and unlike most restaurant bacon, not pan or grill-fried, but instead, deep-fried. It has the ideal balance of meat and fat to make it chewy, with enough fat to coat your palate with addictive umami. If you look around this small diner, almost every plate will have some iteration of that bacon: on a breakfast plate with eggs and hash browns; alongside pancakes, waffles, or French toast; hanging out of a BLT; on a double cheeseburger. You can buy this same bacon at Bernies Fine Meats in Port Washington, but it might be hard to duplicate this deep-fried perfection in your own kitchen.

When Rivers Edge opened in 1969, they catered mostly to truckers. With easy freeway access, it quickly became a popular truck stop, another diner on the way to somewhere, that happened to have really good food. When I first came here you’d find the parking lot full of big rigs, and inside, seated on stools around the U-shaped counter that dominates the space, truckers, hunched over their breakfasts, eyes down, eating, not lingering, because for them, time was, and is, money.

Things started to change in the 80s. People moved north to Mequon, Cedarburg, Grafton, and Saukville became another bedroom community for Milwaukee.

Now, on most days, there’s not a truck or a trucker in sight. It’s locals dressed in Patagonia and LL Bean, not overalls and jeans. Customers come in their BMWs or SUVs. Perhaps the truckers still show up at 4:30 a.m. I wouldn’t know. I tend to arrive between 8:00 and 9:00 when there’s often a line out the door waiting for a seat at the counter, or at one of a dozen tables. Rivers Edge is small, cozy, intimate, a place where it’s tempting to join in the conversation at an adjacent table.

Everything about breakfast is worth the 30-minute drive from downtown Milwaukee. Each meal is cooked to order and arrives at the table so quickly it almost seems impossible. The farm-fresh eggs never fail to be cooked exactly as you wish; the hash browns are crisp on the outside and soft in the center; the unadvertised surprise, the toasted bread, is homemade daily. We asked our server if we could buy a loaf to take home. “You can,” he said, “but you need to order it a day ahead. We sell out every day.”

The restaurant is also known for its Chicken Dumpling Soup and it lived up to its kudos. The dumplings, plentiful in the bowl, could double as spaetzle on a plate with some melted butter and wiener schnitzel. The broth left no doubt about the origin of its dense flavor. This soup did not start with a bouillion base.

The daily special, California Medley Soup, did taste as if it came from a commercial starter, yet it was delicious, thick, rich, creamy, full of cauliflower and carrots, almost a complete meal in a bowl.

From the Sandwiches, the Tuna Melt had no shortage of tuna mixed with mayo, but the melted American cheese added nothing to the flavor. This was a toasted tuna salad sandwich, not the usual open-faced which I expected. The BLT starred three slices of that gorgeous bacon, a clear winner in the sandwich category.

You can also order a burger served with American cheese for $3.00, or go whole hog and add cheese and that scrumptious bacon for $5.25.

To complete the meal, you can order pie, but as we noted the four daily specials on the board, Coconut Cream, Lemon Meringue, Cheesecake, and Pumpkin, our server confessed they came from a supplier, not their kitchen. He backtracked on that supplier detail when he said, “Come on a Friday. That’s when we serve homemade Banana Cream Pie until we run out. But be sure to come early. It’s sold out by the end of the day.” 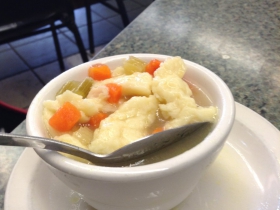 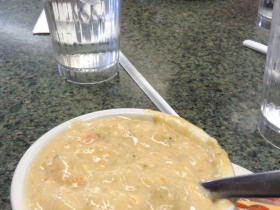 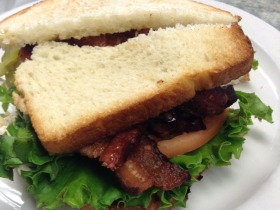 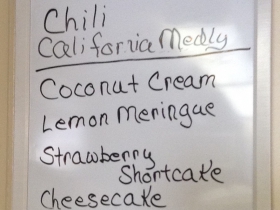 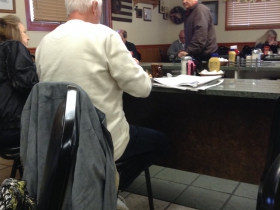 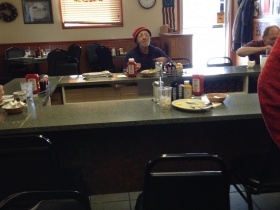