By Tamarine Cornelius, Wisconsin Budget Project - Nov 1st, 2017 03:42 pm
Get a daily rundown of the top stories on Urban Milwaukee

A leading official in Governor Walker’s administration has said that the state will need to spend more money – soon – to expand the state’s prison capacity. State policymakers should take this opportunity to reform the state’s corrections system in a way that locks up fewer people, keeps costs down, and protects public safety.

An article in the Wisconsin State Journal describes the official’s statements:

“Growing by 35 inmates each month, the state prison system is out of room and will need more beds within three years, the head of the state’s corrections system said Thursday.

‘To be candid with you, we will need some relief and we will need it sooner than 2020,’ Department of Corrections Secretary Jon Litscher told lawmakers.”

Wisconsin spends more on corrections than the national average – a sign that the state should be working to reduce corrections costs rather than increasing costs by expanding the prison population. Wisconsin state and local governments spent $1.5 billion on corrections in 2015. That’s over a tenth more — 12% — on corrections per state resident than the national average, according to U.S. Census Bureau figures. Nationally, only nine states spent more on corrections per state resident than Wisconsin. (Making useful comparisons of spending levels among states requires combining both state and local government spending, since various duties are performed at different levels of government in different states.) 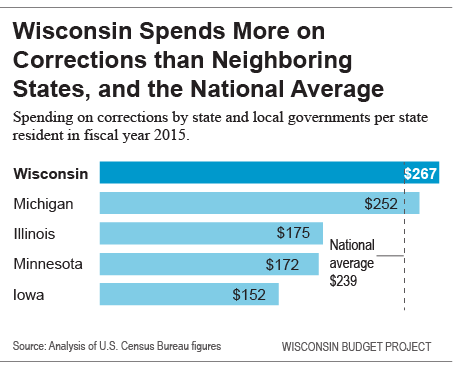 Wisconsin Spends More on Corrections than Neighboring States, and the National Average

Wisconsin has more people in prison or jail for our state size than Michigan, Illinois, Iowa, and Minnesota. Wisconsin incarcerates twiceas many people for our population size as Minnesota.. 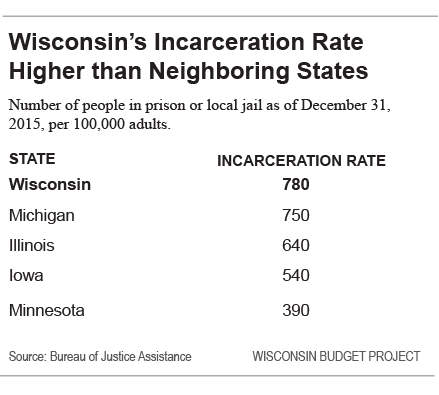 In addition to exacting a price from state taxpayers’ pocketbooks, Wisconsin’s costly overreliance on incarceration inflicts a great deal of damage on communities and families, particularly those of color. Wisconsin incarcerates a far higher share of African-American men than any other state, damaging families and individuals and keeping them from reaching their full potential. The consequences of high rates of incarceration harm the economic stability of families and weaken the state’s economy.

Fortunately, there are concrete steps Wisconsin can take to bring down the high monetary and community cost of its corrections policies – as long as state policymakers are willing to make fundamental reforms to the system instead of just adding new prison beds:

There is plenty of interest in conservative circles at the national level and in other states in looking at alternatives to incarceration as a way to bring down costs, but Wisconsin policymakers haven’t yet made it a priority. As lawmakers face the reality that Wisconsin prisons are already well past their intended capacity, and that locking up additional people will entail significant additional costs, perhaps they can be persuaded to implement the approaches that other states are using to save money and strengthen communities.