‘La Boheme” turns an opera -- and Puccini’s gorgeous music -- into a unique ballet. 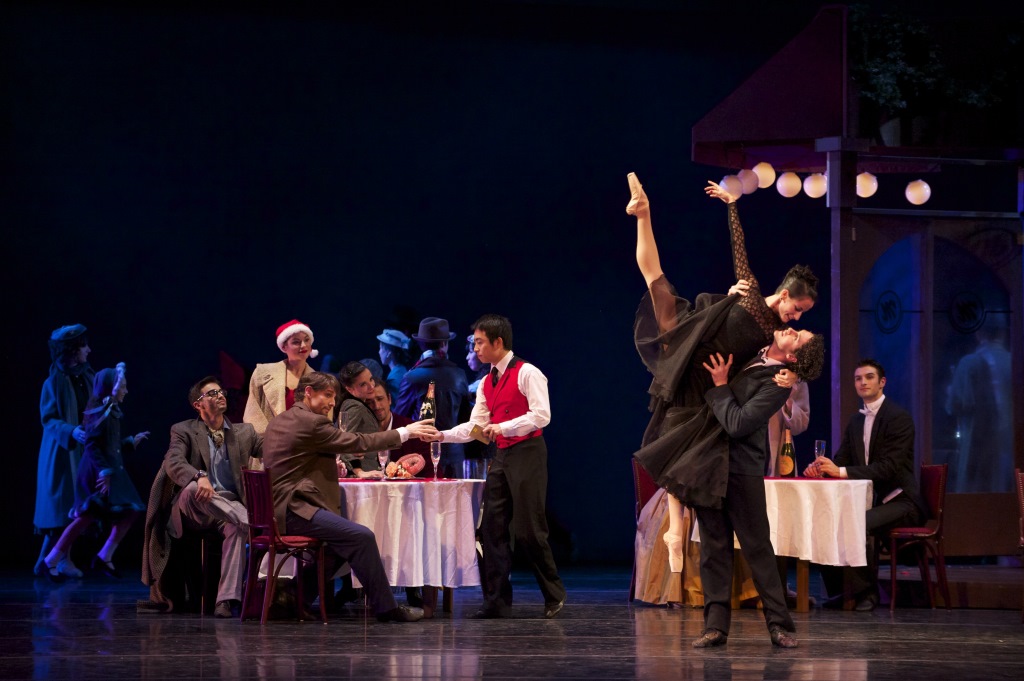 Bohemians are “the great family of poor artists,” wrote Henri Murger, author of the short stories that inspired the opera and ballet La Bohème. While one might find these dreamers in New York, Chicago, or Milwaukee, Murger claimed “Bohemia only exists and is only possible in Paris.”

Bohemian Paris is vividly represented by the Milwaukee Ballet’s La Bohème, which opens Thursday, November 2 at the Marcus Center for the Performing Arts. Reprised from the 2012 Milwaukee Ballet production, the ballet is based on Giacomo Puccini’s well-loved opera set in 1830s Paris. Michael Pink, Artistic Director of Milwaukee Ballet Company, has moved the action to Paris in the 1950s. Sets and costumes evoke Henri Cartier-Bresson’s black-and-white photography of Parisian street life and cafés. Pink said in a 2012 interview that he “cadged the time period from the Baz Luhrmann production for opera” — referring to Luhrmann’s 2002 Broadway staging of the Puccini opera. Pink hopes that audiences will respond to the more modern look of the ballet.

Puccini said that his talent was to put “great sorrows in little souls,” a nod to his interest in the emerging aesthetic theory of realism, or “verismo,” as it was known in Italian. Verismo focused on the struggles of ordinary people and contemporary concerns.

The story concerns Rodolfo, a poet, who lives in a garret with the painter Marcello, the musician Schaunard, and the philosopher Coline. When Rodolfo meets the frail seamstress Mimi, the two fall in love. Sadly, their love is beset by jealousy and misunderstanding. Eventually the lovers part. In her final moments, dying from tuberculosis, Mimi is reunited with Rodolfo in the small apartment where they first met.

Choreographed by Michael Pink, La Bohème is another chapter in Milwaukee Ballet Company’s staging of story ballets. The challenge is not just to tell the story without miming, but also to replicate the emotional content of the vocal lines through dance and instrumental music.

“Michael first asked me if I thought Puccini’s La Bohème could work without voices for a ballet,” Music Director Andrews Sill recalls. “When I was young, I remember loving a recording André Kostelanetz made called Puccini Without Words. I ordered a CD of that recording and listened carefully to it and realized that the music absolutely has a compelling power even without the singers.  So, I took a deep breath and said to Michael, ‘Yes, this will work!’”

Critical commentary on the opera notes the orchestra functions as a character, highlighting the stops and pauses in conversation and replicating the emotional content of the vocal lines. “We think of La Bohème as being rich and abundant and romantic and generous, and it is all of those things,” says Sill. “But, as Michael and I shaped it and worked on pacing it as a ballet, I realized that there’s no wasted material in this opera anywhere. The musical and dramatic argument Puccini makes is very carefully and tightly constructed.”

“When I arranged Puccini’s music for this ballet, I kept as much of Puccini’s choice of instruments intact as possible,” he continues. “Often, Puccini’s great vocal lines are played simultaneously by an instrument or instruments in the orchestra; but, occasionally, I would have to assign a vocal line to a particular instrument. In those cases, I tried to match the timbre of the instruments I chose either to the character of the voice which would have been singing, or to the character of the drama at that moment.  Ultimately, I want it to sound entirely like Puccini.”

La Bohème will be performed at the Marcus Center for the Performing Arts November 2-4 at 7:30 p.m. and November 5 at 1:30 p.m. The production is two hours and 15 minutes (including two 20-minute intermissions). Tickets range from $40-$115. For additional information or to purchase tickets, call Milwaukee Ballet box office at 414-902-2103 or visit milwaukeeballet.org.