By Tamarine Cornelius, Wisconsin Budget Project - Oct 6th, 2017 12:06 pm
Get a daily rundown of the top stories on Urban Milwaukee

A provision that Wisconsin lawmakers included in the state budget would stratify students in the Racine area by income and race and make it more difficult for the Racine school district to improve academic opportunities for students. The budget encourages  wealthier, less racially diverse areas of the Racine school district to break off and form their own separate districts, concentrating poorer students in the remaining portion of the district.

Racine Unified School District is the fifth-largest district in the state, with about 19,000 students spread out over 31 schools. The school district includes the City of Racine as well as several other municipalities including the villages of Caledonia (about 25,000 residents), Mount Pleasant (26,000 residents), and Sturtevant (5,000 residents).

Students in the Racine school district already face obstacles to academic success. Racine has a higher proportion of students from low-income families than other similarly-situated school districts in Wisconsin and the lowest share of adults with a college degree, according to a study from the Public Policy Forum. The Racine school district itself also faces challenges, including a financial hardship created by lawmakers: The state docks the district about $9 million a year to offset the cost of providing private schools in the area with public money for tuition vouchers.

A great deal hangs on the score that the Racine school district receives on the school report cards. The report cards are based on a series of complex formulas aimed at measuring school performance and accountability, only some of which incorporate differences in student demographics between districts. The complexity of the assessment method and the resulting difficulty in identifying how different inputs would affect the district’s grade, make it a flawed tool for determining whether parts of the district should be spun off into separate districts. An example of how complicated the formula is: the technical guide to the state’s report card system runs a whopping 69 pages and includes calculations like those shown below. 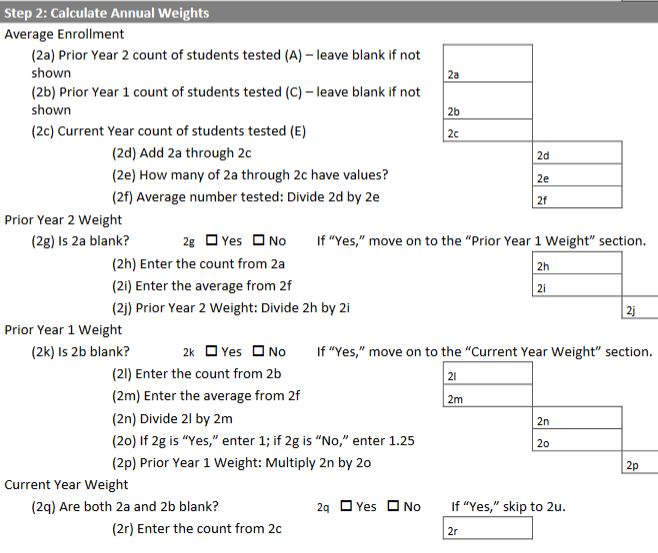 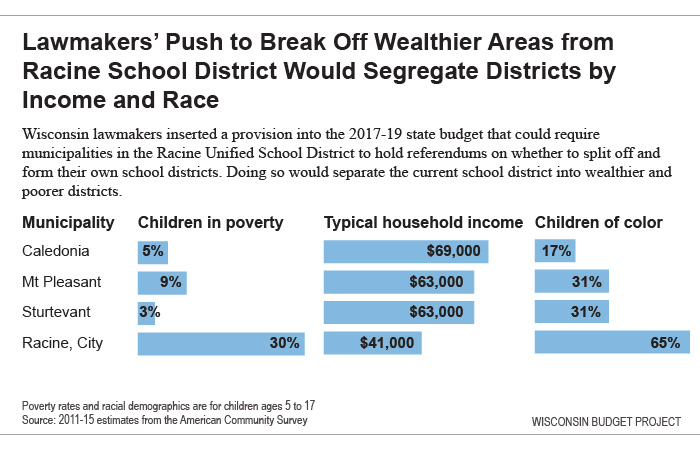 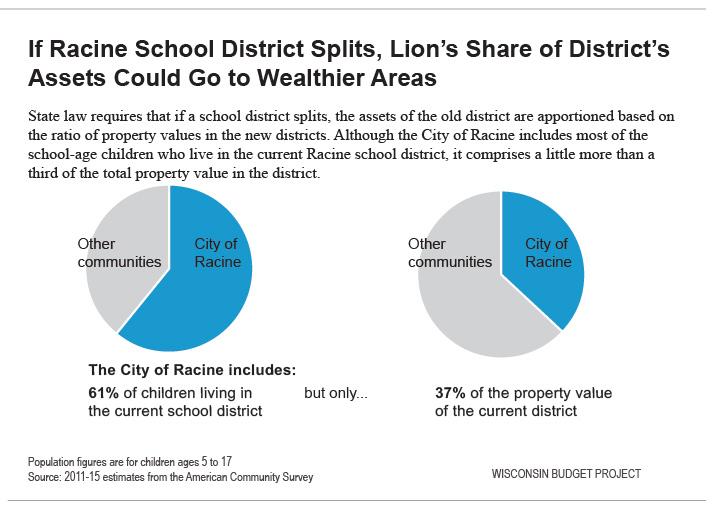 Residents of the villages appear to have mixed opinions about whether to secede from the Racine school district. In 2015, residents of both Caledonia and Sturtevant approved non-binding referendums that called for separating from Racine and setting up their own districts, but the margins were narrow. In fact, Sturtevant’s referendum passed by just six votes.

All children in Racine deserve  an excellent public school education, regardless of whether they live in one of the better-off villages or the City of Racine. Splitting off the wealthier, less racially diverse areas from the rest of the Racine district will make it harder for the students who are left behind to achieve their full academic opportunity. Lawmakers should focus on making sure that the current school district has the resources and assistance from the state that it needs to make sure every child succeeds, regardless of zip code.