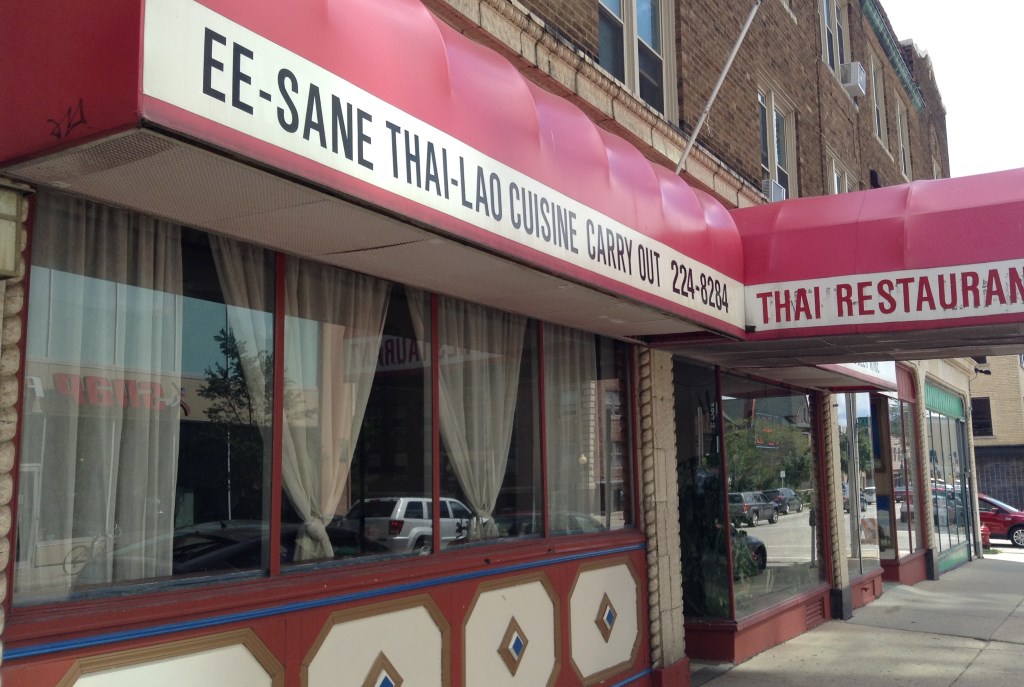 EE-Sane is a popular lower east side restaurant. I rarely encounter a hole-in-the-wall place that disappoints me, so when I gathered three friends to eat some Thai food at this small restaurant on Farwell, I had high expectations.

Things started well when three of us ordered from a list of 25 Lunch Specials which included an Egg Roll or the Soup of the Day. We all chose the egg roll, found the wrapper had a just-out-of-the-fryer crunch, and the filling, full of veggies, tasted fresh. It came with sweet and sour sauce, enough to engage the egg roll.

The rest of our meals lacked the vibrant flavors associated with the Thai food I have experienced in Bangkok as well as several restaurants in Milwaukee. The most disappointing dish, EE-Sane Noodle, a mountain of allegedly stir-fried noodles, tasted of fish sauce, a flavor which should be merged with the spices, not obvious in the flavor profile. The noodles came with chicken, shrimp, and vegetables. I found five juicy shrimp, a few tiny bites of chicken, sliced carrots, sliced cabbage, chopped green onions, and enough noodles to feed a family of five. Other than the shrimp and the fish sauce, I couldn’t locate any flavor. After I doused it with soy sauce, the dish came to life.

The best entree of the four we sampled might have been the Pad Siew; however, if those thick rice noodles had been stir fried, as they should be in that dish, it happened a long time ago. Broccoli, beef, and carrots mixed with those tired noodles in thick brown soy sauce added color to the plate.

For Pad Cashew, served with a huge mound of rice on the side, the cook allegedly stir fried more broccoli, carrots, cabbage, sprouts, onion, and chicken in a spicy/fiery sauce complemented with a sprinkle of cashews. “Pad” in Pad Cashew in Thai means stir fried, but again, like the noodles in the Pad Siew, it did not appear those veggies had been stir fried while we waited at the table. Unfortunately, my companion had ordered pork, not chicken, and had specifically requested “No heat.” She rated the dish satisfactory, just not what she ordered.

Another companion chose Yum Nua from the salad menu. This colorful salad included beef, sliced red onion, cucumber, tomato, mint, cilantro, and pieces of iceberg lettuce. This potpourri of veggies came with a slice of lime which she needed to enhance the flavors as the sauce for the salad was puddled underneath everything on the plate. The flavorful beef, albeit tough and chewy, as well as the rest of the salad, improved when things started to steep in the puddle of sauce which remained on the plate. Or as my companion commented, “It tastes better when I eat the sauce and the veggies together with my spoon. That way everything has more flavor.”

It’s not fair to make a blanket judgment after one recent visit and four entrees, but overall, I missed the umami. I wanted that balance of fiery, sweet, sour, salty — the works — that make Thai food a compelling cuisine laced with vibrant bright fresh flavors.

We ended our meal with fortune cookies. Mine read, “The important thing is to express yourself.” 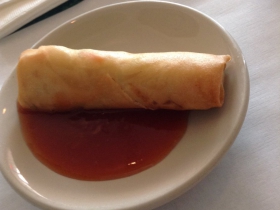 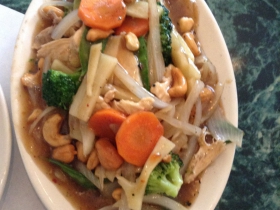 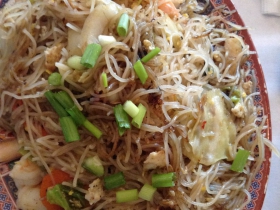 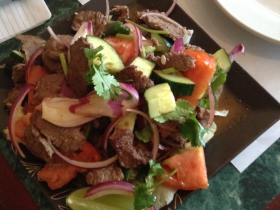 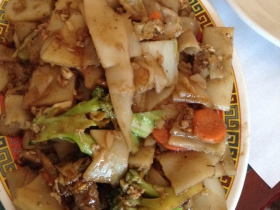 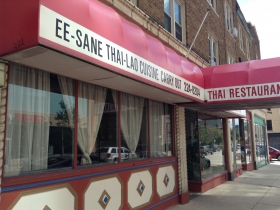 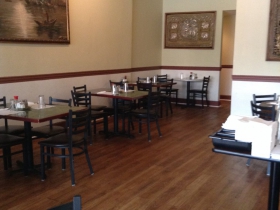 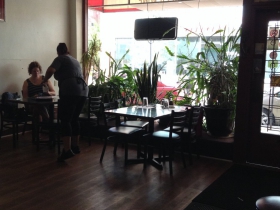 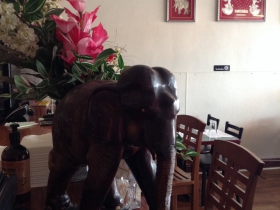 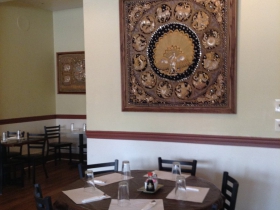 25 thoughts on “Dining: EE-Sane Was a Disappointment”