By Tamarine Cornelius, Wisconsin Budget Project - Sep 5th, 2017 10:36 am
Get a daily rundown of the top stories on Urban Milwaukee 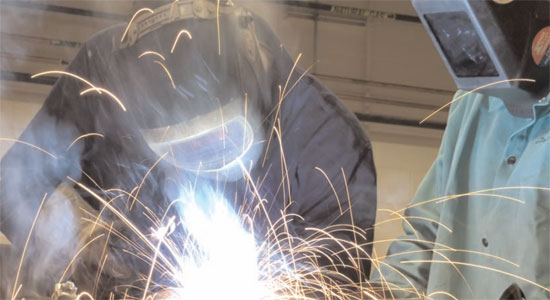 Even as the state’s unemployment rate declines, Wisconsin workers face significant barriers to economic stability, according to a new look at the state’s labor market. Long-term stagnation in wages, a black/white economic disparity that is among the largest of any state, increasing levels of income inequality, a shrinking middle class, and limits on the ability to unionize are among the obstacles faced by Wisconsin workers, according to The State of Working Wisconsin 2017 by COWS.

Key findings of the report include:

It was after the recession that Wisconsin employment growth slowed compared to the national average. As noted in the report:

2. Wages for workers in Wisconsin and other states have been stagnant. According to the report:

Taking inflation into account, the wage of Wisconsin median worker is 92¢per hour more today than it was in 1979. That’s very slow wage growth – an annual raise of less than 3¢ per hour…Unlike the data on jobs, where Wisconsin’s story is markedly worse than the national trends, the wage data is more or less in line with the national picture. 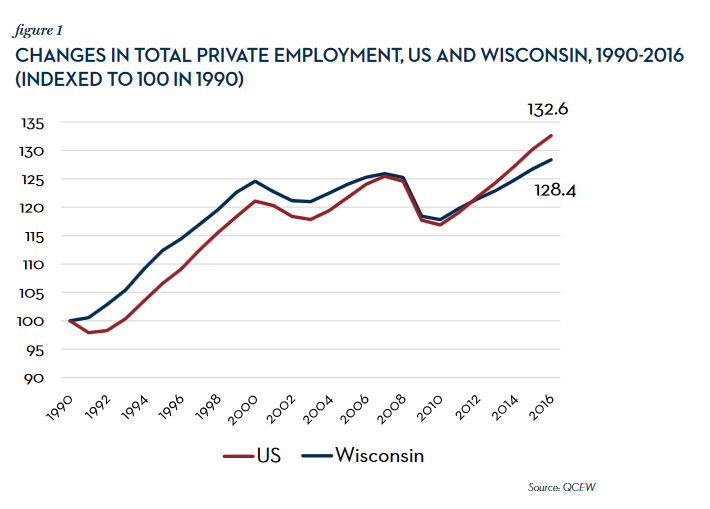 It’s not just adults who face limits on opportunity based on their race. The poverty rate for black children in Wisconsin is nearly four times as high as the poverty rate for white children, a gap that is the third largest in the country.

4. The income gap between the rich and poor is at a near-record level. The wide chasm between the very highest earners and everyone else in Wisconsin poses hardships for families, communities and businesses. In Wisconsin, 1 out of every 6 dollars of income winds up in the pockets of the top 1% of earners, a share that has more than doubled since the 1970s. Between 1979 and 2014, the average income of the top 1% in Wisconsin grew over 130%, while the average income of the remaining 99% grew by only 9%. For more about income inequality in Wisconsin, read Pulling Apart 2017: Focus on Wisconsin’s 1%, August 8, 2017.

6. Declining rates of unionization go hand-in-hand with a declining middle class. The share of Wisconsin workers with union membership has declined sharply in recent years, especially since 2011 when lawmakers passed Act 10, limiting collective bargaining rights for public sector workers. The report notes that “unions have played a critical role in Wisconsin’s economic history, helping secure better wages and working conditions for their members and for workers throughout the state.” Unionized workers earn more in wages and other compensation than non-union workers who are otherwise the same, and the higher wages help push additional households into the middle class. Union workers are also better off than their counterparts with regards to health insurance, retirement, and paid time off. The decline in union coverage weakens forces that help build the middle class.

Some Wisconsin lawmakers have championed tax cuts for corporations and the wealthy, limits on the ability to unionize, and rollbacks of rules protecting Wisconsin’s air, water, and land as measures that would boost employment in the states. But as the report notes,

Notably, there is no evidence that any of the economic reforms of the last six years have changed the trajectory for the state. Job growth lags, wages are stagnant, inequality is growing. Wisconsin has fallen off national pace on job growth, in spite of the reforms. Wages remain stagnant and inequality is growing in step with national trends, in spite of the reforms. The one place where economic policy has clearly changed the state and moved it away from national trends is in union coverage. Act 10 did not speed up our job growth, but it decimated unions in the state.