24 Counties Have Voted for Fair Maps

They passed resolutions calling for nonpartisan redistricting to end gerrymandering. 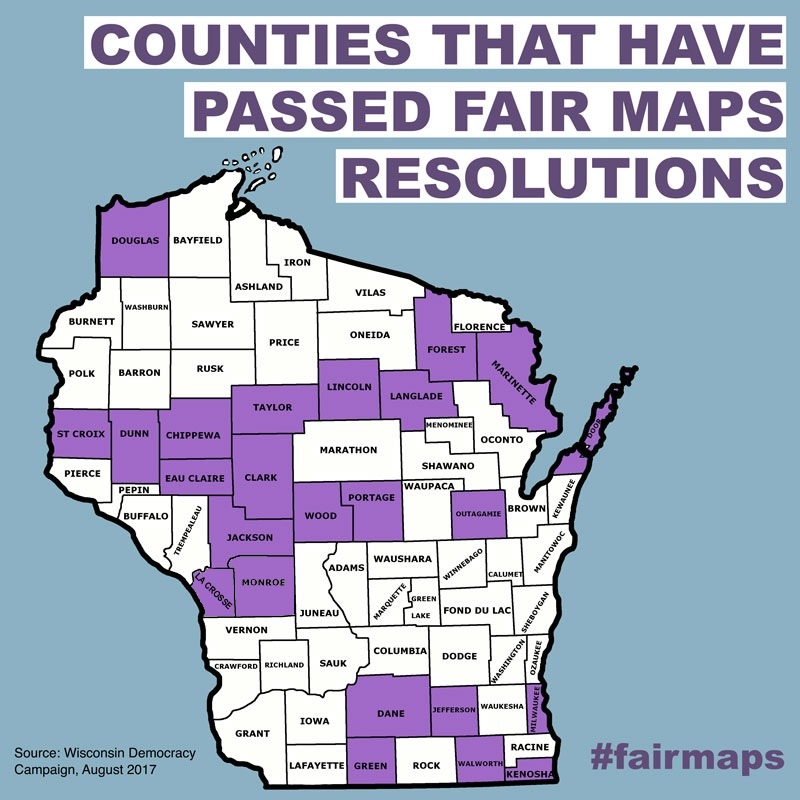 Counties that have passed fair maps resolutions (in purple).

The drive to improve the way Wisconsin redraws its district maps is rapidly gaining speed.

Just in the past two weeks, three more counties — Kenosha, La Crosse, and Monroe — have passed resolutions saying they are in favor of nonpartisan redistricting, with the maps drawn not by the political party in power but by civil servants with specific criteria to ensure that the maps are not rigged in favor of any party.

That’s how it’s been done in Iowa for the past 35 years, so this nonpartisan process is called the Iowa Model.

In the first eight months of this year, a total of 17 counties in Wisconsin have endorsed the Iowa Model, and 7 counties endorsed it in previous years, so 24 counties are now on board.

This movement for fair maps has gained speed for three reasons.

The first is because of the Whitford case, the successful federal lawsuit against the Republican legislative leaders for the way they gerrymandered the maps in 2011 to secure a partisan advantage. A three judge panel ruled last November that this was unconstitutional, and the case is now at the U.S. Supreme Court.

Second, a Lincoln County Board member, Hans Breitenmoser, took up the issue with gusto earlier this year. He not only got a resolution passed at his county board, but he has urged other county boards to follow suit.

And third, a coalition of pro-democracy groups — Fair Maps Wisconsin — has come together to push this issue forward. The coalition consists of such groups as Citizen Action Organizing Cooperatives, Common Cause in Wisconsin, the League of Women Voters of Wisconsin, the Wisconsin Democracy Campaign, Wisconsin Fair Elections Project, and Wisconsin Voices, among others.

If you would like your county to pass a resolution endorsing the Iowa Model, contact Beverly Speer at the Wisconsin Democracy Campaign at speer@wisdc.org.

9 thoughts on “Op Ed: 24 Counties Have Voted for Fair Maps”