Family owned and still one of the town’s best for true Italian dining. 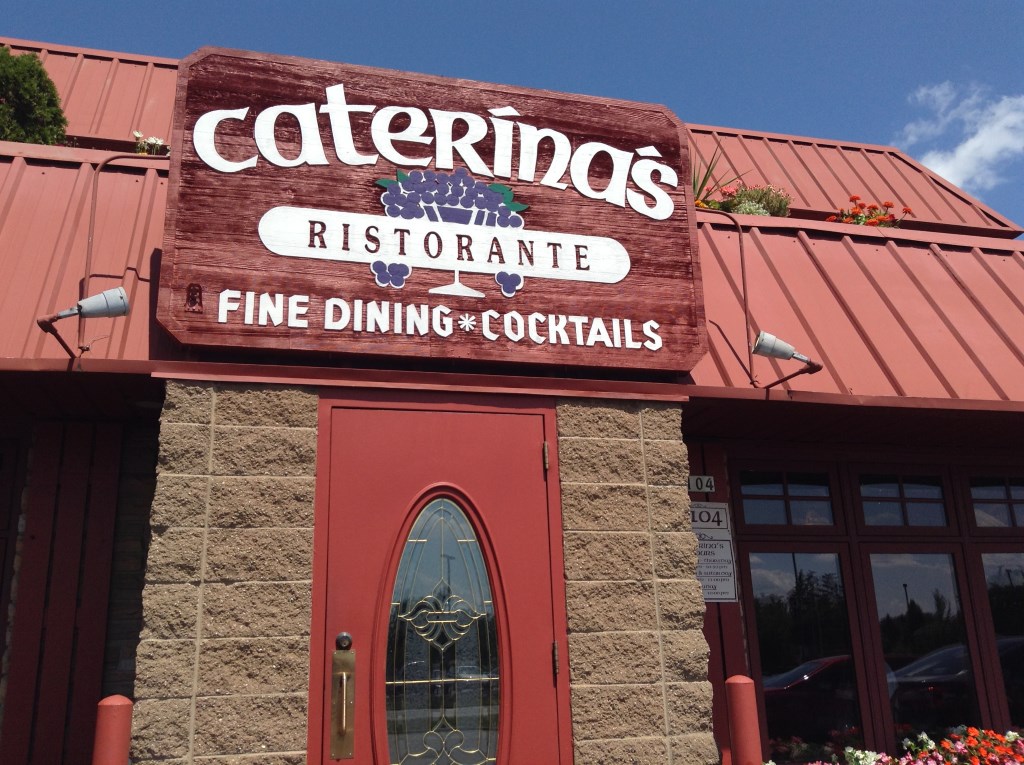 Caterina’s doesn’t announce itself from the street with its small parking lot on Oklahoma Avenue, its unobtrusive entrance, and its location in the outer reaches of West Allis. For people who love traditional Italian cuisine, it’s the real deal, not to be confused with Olive Garden or Buca di Beppo. They don’t serve froufrou food, just authentic home cooking with a few dishes like Scampi Isabella, Pork (tenderloin) Involtini, and Lamb Shank with tomato risotto, bordering on fine dining. Caterina’s has a casual supper club vibe with cozy booths, cushioned seats, a semi-circular bar, and for people who appreciate something to lower the decibels, carpeting.

Even the bread deserves a mention. It came to the table along with a bowl of olive oil that had garlic slices floating in it, and for additional flavor, a small dish of parmesan cheese. It had heft and a crunchy crust, making an ideal tool to soak up that garlic-scented olive oil while sipping a glass of Moscato d’Asti. Curious, I asked our server about the bread. “It’s from Scordato Bakery at 51st and Howard,” she said.

Caterina’s family restaurant saga began when Tony Ingrilli came to Milwaukee in the 1960s from Sicily and soon after opened Ingrilli’s Villa, a casual restaurant on the south side. The original has departed and in its place, the more upscale Caterina’s which Tony Ingrilli and his wife Kathy opened in 1982.

This is a classy joint. From Calamari on the Appetizer menu to Tiramisu, every dish has the flavors of Italy branded in its DNA. The Calamari, for example, crisp on the outside, not greasy, tender inside, didn’t need the accompanying marinara to ramp up the flavor. And unlike other similar calamari appetizers I’ve sampled, there wasn’t a hint of an endlessly chewy rubber band in the dish.

The entrees, equally delicious, came with soup du jour, or salad, and a side of pasta or potato. The Cream of Mushroom Soup left no doubt that wild mushrooms figured in the mix, while salads appropriately crunchy, were lightly dressed with Italian vinaigrette.

Spaghetti or mostaccioli with two giant meatballs balanced on the pasta made an impressive display of classic Italian cuisine. Not to be outdone, the chef’s Ravioli, tender house-made pillows filled with lean beef, burst with Italian seasoning, a simple yet memorable treatment.

Eggplant Parmigiana, my choice, stood apart as the best in show. I ordered the appetizer portion which I soon learned masqueraded as an entrée. Two layers of thinly sliced breaded eggplant were baked with marinara and a layer of mozzarella. Sounds like just another eggplant parm, except it wasn’t, and to seal the deal, it’s served with a gigantic knife with a serrated tip, the better to carve the eggplant into manageable bites. 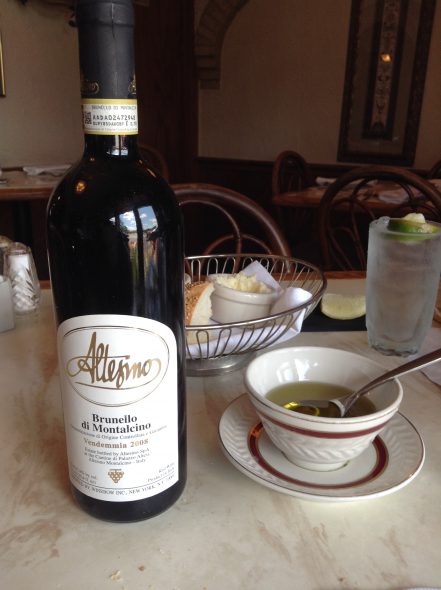 Thanks to the generosity of someone in my group, everyone at the table sampled Brunello di Montacino, a special treat from the premium wine list. I wanted to take the bottle home but someone beat me to it. I settled for the cork.

A friend and I returned a few days later for a second meal because I wanted to order from the sandwich menu. I passed on Breaded Steak, Tuna, Burgers, Italian Sausage, a Meat Ball Sandwich, Italian Beef, and went directly to Sicilian Veal. I was surprised and delighted to learn I could accompany the sandwich with pasta instead of fries. Al dente mostaccioli with marinara, a hearty bowl of pasta, could easily count as an entire meal.

Case in point; while my companion and I waited for our food, we saw a serving of lasagna as big as a shoebox at an adjoining table. I could have dined on that size portion for a week.

Need I repeat, portions at Caterina’s were consistently generous.

My Sicilian Veal came lightly breaded, served with roasted red peppers. The veal was tender, lightly seasoned, a delicate treatment of the meat. They let the veal stand by itself, no cheese, no sauce, just two of pieces high quality meat tucked inside a toasted bun.

My companion discovered the joy of dipping the bread into the the olive oil and parmesan. We ordered a second basket just in case we ran short. His Italian Sausage Sandwich stayed with the generous serving mantra, not one but two fat spicy sausages stuffed in a single bun. No complaints; he polished off everything including the bowl of pasta with marinara.

I finished with Tiramisu, the requisite finale to an Italian meal. The Mexicans have their Tres Leches Cake, the Italians have Tiramisu, both a sweet juicy treat, decadent exclamation points. The Tiramisu was too delicious to dissect, yet I knew it hit all the right notes, a light filling, hints of coffee in the ladyfingers, and a dusting of cocoa to leave a chocolate finish in the mouth. Like everything I ate at Caterina’s, dessert left me with a smile. The next time I crave Italian food, I’ll know where to go. 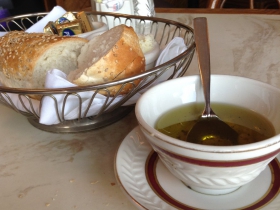 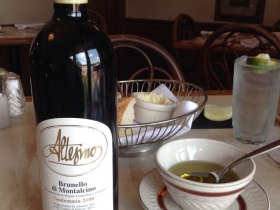 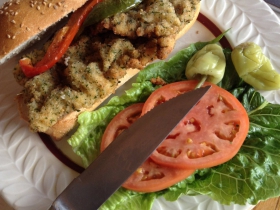 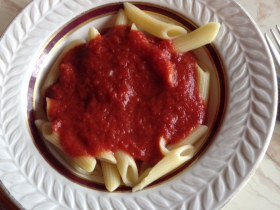 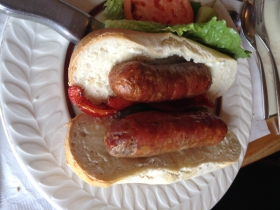 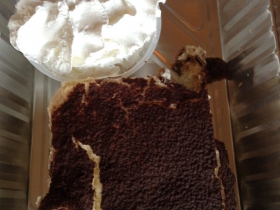 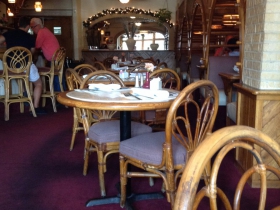 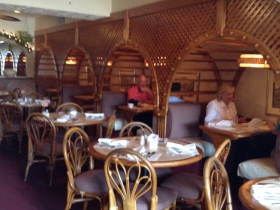 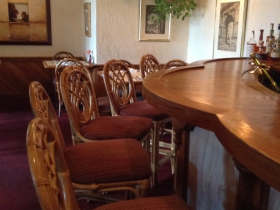