A Photographer For Our Time

Daniel Arnold’s photos of people fascinate many people. His work is now at MOWA. 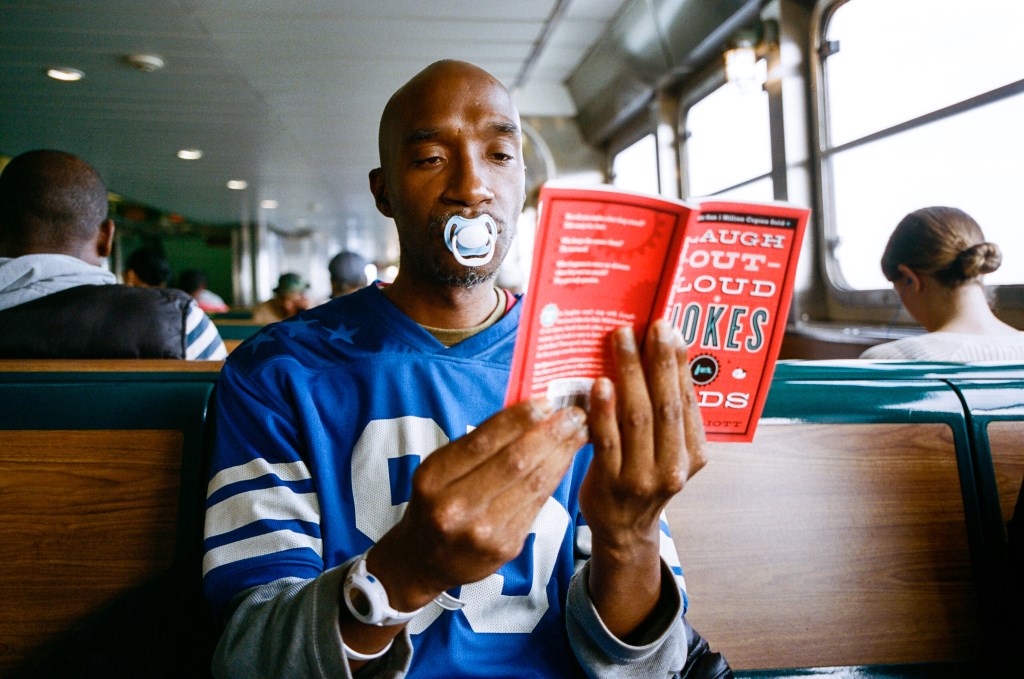 A grown man reads at an indeterminate location with a pacifier in his mouth. The book is entitled “Laugh-Out-Loud Jokes For Kids.” No kids are in sight. The man appears unamused. Daniel Arnold, Untitled, photographs, 2017.

At first glance, Daniel Arnold’s photographs look like our own. They have all the rough-hewn verity of everyday iPhone snapshots captured at the unflagging speed of life. But each of Arnold’s photographs harbors a little something extra, which – like good puns, piquant aphorisms and mind-expanding Zen koans – require a moment to sink in:

-A grown man reads at an indeterminate location with a pacifier in his mouth. The book is entitled “Laugh-Out-Loud Jokes For Kids.” No kids are in sight. The man appears unamused.

-An ill-humored nun presses her way through a throng. She wears yellow fitover sunglasses perched precipitously over her coif and veil, but no glasses under her fitovers.

-A couple sits for a caricaturist. The woman wears a surgical mask, but not in the nearly finished drawing.

Arnold’s eye for the absurd in the unassuming and the humanity in urban anonymity has won him some 156,600 Instagram followers and a career that a few years ago seemed like “a total, total pipe dream,” as he once put it. A representative selection of Arnold’s recent street photography is on display in the artist’s first solo museum exhibition, “Daniel Arnold: A Paparazzo for Strangers,” at the Museum of Wisconsin Art through September 17.

After ten years of trying to establish a foothold in New York’s creative industry as a freelance writer and photographer, Arnold found an ideal outlet for his personal photographs on the newly released platform of Instagram. One birthday, broke and with nothing to lose, Arnold posted a proposition on Instagram: send a screenshot of your favorite of his Instagram photos along with $150 and receive a 4×6 print. The ploy went off like gangbusters, netting him a much-needed $15,000. On a lark, Arnold pitched the story to a friend at Forbes, which quickly went international, reaching some 400,000 readers in a day. “It was a giant shot of legitimacy to this unproven, renegade thing,” he remembers, “I felt called upon to live up to the hype. Life has been a dream ever since. I wander around, stare at the world and look for stories. My social life has dwindled to almost nothing and I work constantly, but I have a recurring page in the New York Times.”

Street photographs show a fleeting moment but shed light on a time – or at least Arnold’s singular take on our times. “I don’t feel like a historian,” he says, “My work is a reflection of the subjectivity of reality. I look at the same things everyone else does, but only I see it like I do. So my photographs are documents of how I see things as opposed to how things really are.” The filtering of reality through Arnold’s cognitive lens, as well as his camera lens, applies equally to his depiction of strangers: “My photographs recast people in roles that they probably don’t imagine themselves as playing. It’s my own casting, blocking and choreography and therefore not a totally democratic remembrance of reality. You could say that my photographs are my emotional interpretation of our time, which I suspect is a little bit weirder than actual objective truth.”

In some cases, the striking intimacy of Arnold’s photographs is owed to the fact that his unwitting model or models realize they are being watched, but too late to react reflectively:

-A fey blonde, face half-obscured by hair, calmly makes eye contact with Arnold’s lens. Looking as if she’s been plucked from a runway and dropped on a crosswalk in Midtown Manhattan, her otherness is reinforced by her chic white cow fur coat, which contrasts with the black clothes of her fellow pedestrians, all of whom walk in the opposite direction.

-Again on a crosswalk, an otherwise unassuming teenager appears fierce through direct eye contact and a mouth made barbarous by balancing a tripod on his lower lip.

-A boy peers through a car window directly at the viewer. Raindrops on the window obscure his face. His hunched posture, neon red hair and form-fitting white garment give him the air of something escaped from a secret government facility.

There is an ethical conundrum at the heart of street photography. The genre owes much of its power to the unselfconsciousness of its subjects. To first request a stranger’s consent would destroy their obliviousness and thereby what makes the genre unique. Street photography’s honesty, our feeling that we have some insight into the essential personality of these strangers is due to the fact that, in this moment, they have surrendered their posturing to urban anonymity. But many people object to being unwittingly photographed. In addition to a good eye and quick instincts, a street photographer must also possess the ability to placate upset strangers, especially in a truculent metropolis such as New York City.

For both these reasons, Arnold cites the cellphone camera as a turning point: “Especially in early days of iPhones, it didn’t occur to anyone that a phone would be taking a picture. That broke the world open. From that point on, every minute of my commute changed. The phone allowed me to take the photos that I’d been scared to take for all those years.” These days, save for his subway rides for which he characterizes his iPhone as “the best tool for the environment,” Arnold shoots on film using either his Leica M7 or Contact G2, making minor aesthetic adjustments after the fact to ensure that the photograph translates well to a tiny illuminated screen.

It is one of the virtues on Arnold’s art that his photographs appear so inspiringly similar to our own. For those who feel beckoned to take up their camera, on Saturday, August 26, from 10 a.m. to 1 p.m., Arnold will be leading “City Street Fashion Instagram-Style,” an interactive experience designed to help participants find their own photographic voice. “My first advice is stop trying to take a good picture, have to get the idea of a good picture out of your head,” Arnold says, describing his work ethic as a “thrift store mentality:” “You’ve got to dig through 30,000 nasty shirts from dead guys before you find the one that makes it worth it.”

“City Street Fashion Instagram-Style” is $35 for MOWA members, who can register online here.

Or just catch the exhibition: “Daniel Arnold: A Paparazzo for Strangers” at the Museum of Wisconsin Art in West Bend, through September 17. 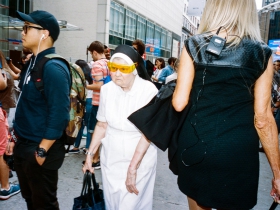 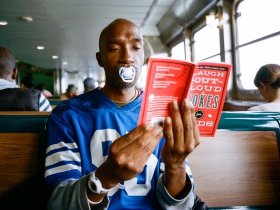 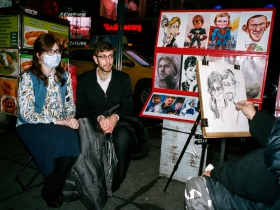 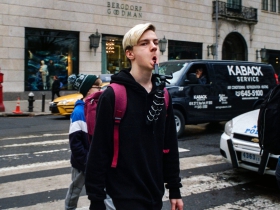 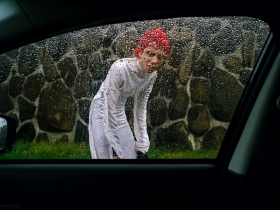 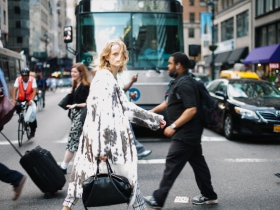 One thought on “Art: A Photographer For Our Time”