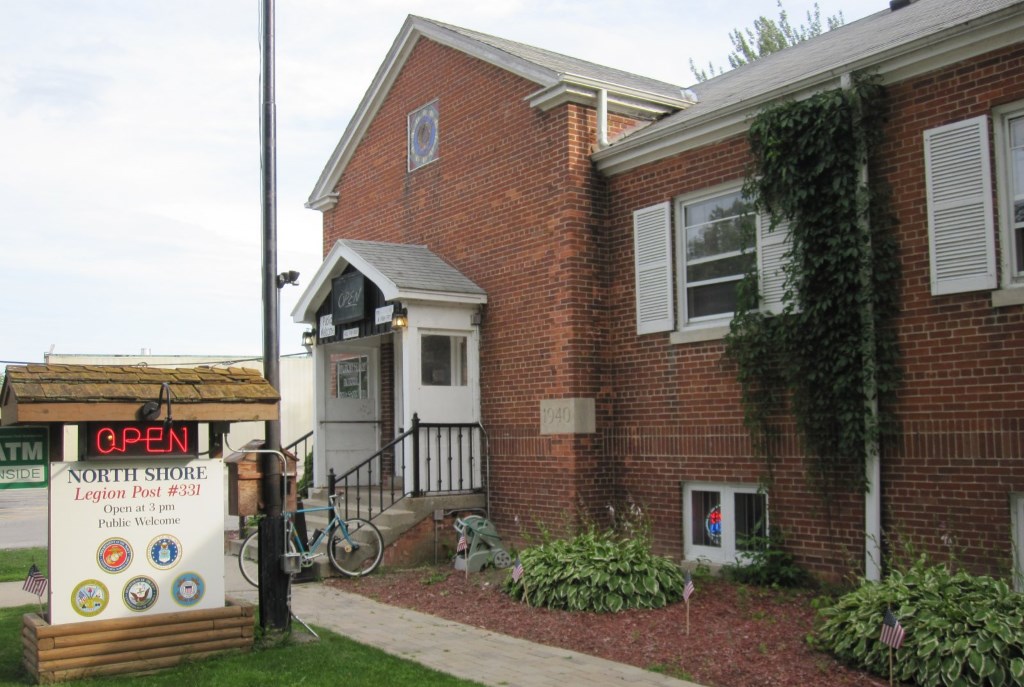 Shorewood is more known for its homes than for its saloons — this is no West Milwaukee, or South Milwaukee, with loads of thirsty industrial workers. Its old standby, The Village Pub, has since transitioned into Cloud Red, while the other watering holes of Shorewood are relatively new.

However, Shorewood retains a venerable drinking establishment in the form of the American Legion North Shore Post #331, which has been open since 1940.

The Legion post itself was formed in August, 1935 as one of thousands nationwide of the organization that was founded in 1919 by veterans of what was then called the Great War.

The members of the post did themselves proud with their building, which is a solid red brick structure with Colonial aspirations. Like many such structures of the era, this one is raised up several steps above ground level. We’ll see why in a moment, but first note the fine engraved cornerstone set into the wall of the entry. The porch has some modest columns, and the front door has side lights and a fanlight window surrounding it. To the left of the door is a sign with a black background, and raised metal letters of an elegant Art Deco script. It reads “American Legion Memorial North Shore 331.” More recent signs, above the door read “Open,” “Hall for Rent,” “Fri – _________ & Fish Fry,” and, encouragingly, “Public Welcome.”

So, up the stairs it is, through the door, which has a script “North Shore” spelled out in glass. A sign in the entryway promotes $2 tacos on Wednesdays, 50 cent wings on thursdays and “Friday Fish Fry w/ FREE Pint of Riverwest Stein Beer!”

And now, down the stairs we go, bypassing the Clarence J. Siegman Memorial Hall above and treading the terrazzo toward the bar below, located in the raised basement. A sign on a table offers an invitation to Yoga Sundays, which is presumably not among the oldest of the building’s many traditions and activities. Once in place, admire the fine old floor and the generally authentic interior. The bar has a well-constructed wooden ceiling, which goes along well with the wainscotted walls. The room has a number of tables for four, with nice sturdy chairs. They await diners eager for home made fish fries, which include home made potato pancakes and “cole slaw from scratch.”

It’s all very genuine and homey, with a collection of odds and ends on the wall. Some have to do with the post and its activities, others are reminders to drink beer. Before we head to the bar, look back at a little game room with electronic and conventional darts, along with other amusement devices. One could get caught in the crossfire here if not careful.

Unlike many places of similar vintage, the Legion Post has managed to escape several decades of misplaced “modernization,” and we are spared the dropped ceilings, boarded-up windows and similar deprivations that so mar other places. Let’s go to the men’s room, and you will see what I mean — two original urinals stand side-by-side like good soldiers, latrine style. The floor is a dizzying tile mosaic — a monochrome Mondrian done in white, black and grey. The door to the toilet stall is wooden and original, right down to the latch.

The bar itself is a “U” shaped affair, with a little peninsula in the middle with the cash register at the very tip. This serviceable setup is convenient for the bartender, and allows enough room so that he can have a stool as well as the customers. The tavern is a draw for locals who have few other options without going all the way across the river to Riverwest. Conversation tends to be about neighborhood things and friends of friends who do not happen to be at their customary seat at the time. All is low key and friendly.

Take a look at the original glass “EXIT” light above the door. You don’t see a lot of them around any more. If you happen to hear some noise outside, it might be the folks out on the patio between the post building and an odd little garage. If you hear some pounding, it might be a Zumba class going on overhead, and if you hear some very fine music it could be locals Kim Zick and Connie Grauer of Mrs. Fun, and it might even be New Year’s Eve. 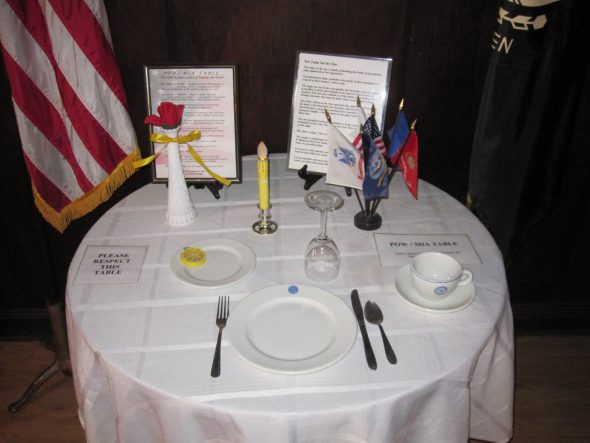 The Table Set For One. Photo by Michael Horne.

Drinks are reasonably priced here, which is another attraction. Perhaps this economy is due to the fact that the entire building is tax exempt. Shorewood’s assessments are done by Accurate Appraisal. In the City of Milwaukee, the bar and restaurant use of an American Legion Post or similar organization is fully taxed, you can be sure. Examples would include Club Garibaldi and the Falcon Bowl.

When it is time to leave, spend a moment of reflection at a round table with a linen cloth, a folded American flag, a red rose tied with a yellow ribbon and an electronic candle that flickers. It is “The Table Set for One.”

This table, set for one, is small, symbolizing the frailty of one prisoner, alone against his or her suppressors.

The tablecloth is white, symbolic of the purity of their intentions to respond to their country’s call to arms.

The single red rose in the vase signifies the blood they may have shed in sacrifice to ensure the freedom of our beloved United States of America.

This rose also reminds us of the family and friends of our missing comrades who keep the faith, while awaiting their return.

North Wilson Drive forms the westernmost spine of Shorewood, with Estabrook Park and the Milwaukee River beyond. The east side of the street has a preponderance of post war four-family apartment buildings, built by the dozen and well maintained over the years. This type of development is more common to places like Wauwatosa and western West Allis than it is to the North Shore.

The west side of the street is not developed, with the exception of a Brooks Stevens-designed building at the northwest corner of E. Capitol Drive, a gas station at the north end, and this American Legion Post. Directly behind the post building is the Oak Leaf Trail. Access is via a couple of steps and through the parking lot. This is one of the few taverns along the bike path, with another being The Thirsty Fox on the northwest side of Milwaukee. 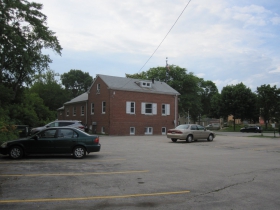 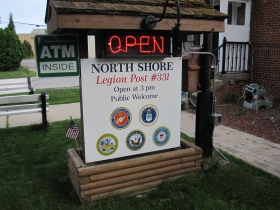 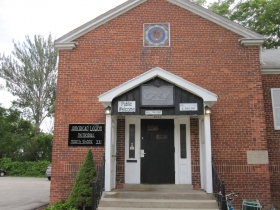 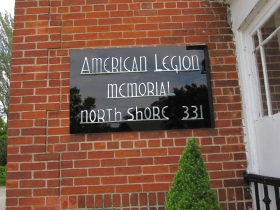 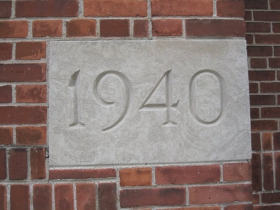 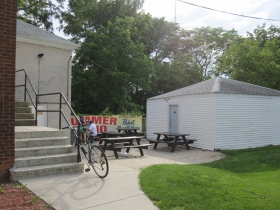