Stone Creek Coffee received unanimous approval from the city’s Historic Preservation Commission to redevelop a portion of a building on Milwaukee’s East Side into a new coffee shop and substantial outdoor patio.

Stone Creek will be occupying a 3,590-square-foot space at the north end of the Mulkern Garage at 2650 N. Downer Ave. The building was originally built in 1912 as a commercial building with parking above. The building still serves the same purpose today, but the chauffeurs have been replaced by self-parking area residents.

As part of the redevelopment Stone Creek will transform the parking lot on the site into an outdoor patio and three-season covered patio.

A new kind of drive-thru is being installed in the building befitting its urban location. The drive-thru canopy will be demolished and the windows along N. Downer Ave. will be replaced to allow for walk-up service.

This won’t be the first time the building has been substantially modified. A series of additions and alterations to the building were made to the building starting in the 1930s. City historic preservation staff member Tim Askin noted: “[The building] was originally built as a red brick Mediterranean-style building, which is hard to believe given its current state.”

Coffee drinkers won’t have to wait long for the space to open. Stone Creek Coffee co-owner and founder Eric Resch told the commission “we hope to open right around the first of the year.”

The site at 2650 N. Downer Ave. has been challenging to redevelop according to Stone Creek. In an application submitted to the commission, Resch offered this summary: “The current ownership situation has made the development of this project a tad difficult. The 1st and 2nd floors of the Mulkern Building are owned by two different groups, by virtue of condo structure that is currently in place. The 2nd floor landlord is not currently using the space and has done very little to maintain the space including currently allowing many broken windows directly above our space.”

According to area alderman Nik Kovac, the city will help support the redevelopment of the property. The city has a number of loan and grant programs, including facade and white box grants, to assist building owners and tenants in redeveloping commercial spaces.

Groth Design Group is leading the design on the cafe.

Associated Bank most recently occupied the space before moving a block south in 2009 to the first-floor of the controversial parking garage at 2590 N. Downer Ave. The bank occupies a 5,498-square-foot space in the 118-stall, five-floor garage.

Stone Creek Coffee has 13 cafes, including their headquarters at 422 N. 5th St. in a building designed by Daniel Burnham near the Milwaukee Intermodal Station. 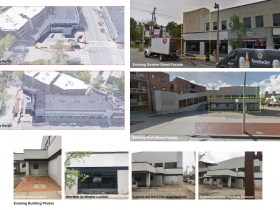 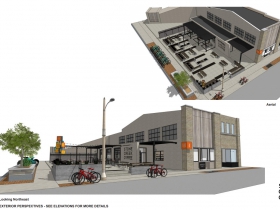 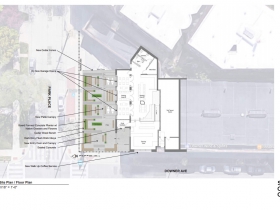