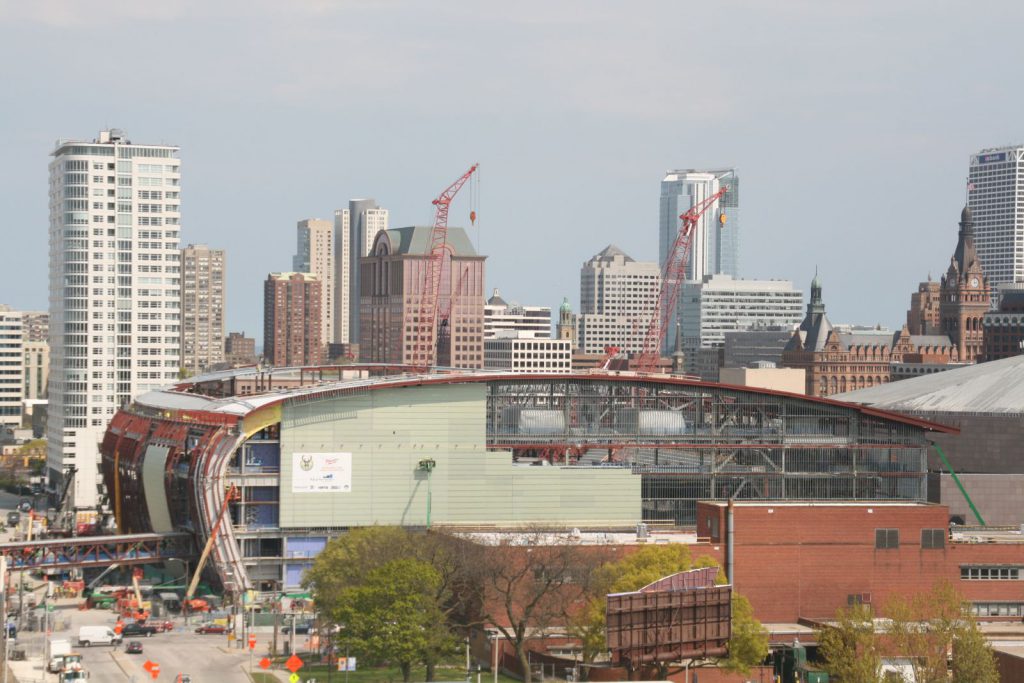 Quality of Life (QOL) refers to non-essential activities that affect the desirability of a place to live. While this could include transit options or location, this article will focus on three key QOL components of Milwaukee County: parks, cultural entities (museums or zoo, etc,) and sports, both professional and non-professional.

Park land is almost entirely owned and operated by county government, with isolated city parks. Cultural entities are either nonprofit enterprises, and government-owned organizations, or hybrids of both. While non-professional sport is relegated largely to schools or recreation departments of local governments, professional sports in Milwaukee are private, for-profit enterprises often played in publicly owned and funded facilities under contractual arrangement. Owners of professional teams obtain long-term leases for these publicly built facilities largely benefitting their private or closely held business.

Financially, this QOL portfolio, except for professional sports in Milwaukee County, is experiencing severe strain and is not sustainable without additional resources. Estimates of deferred maintenance of our parks alone have been over $400 million. 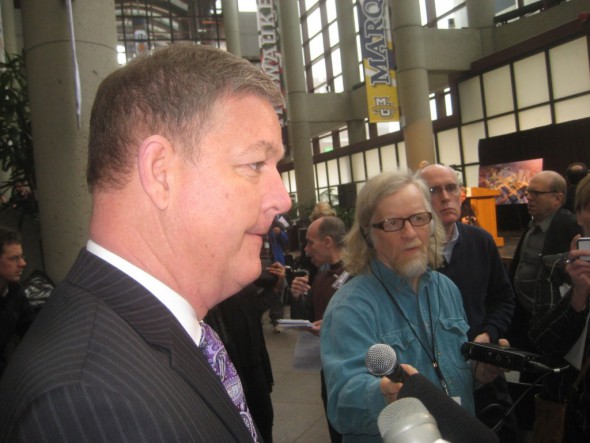 Tim Sheehy speaking to the media regarding the new arena. Photo by Michael Horne.

The Metropolitan Milwaukee Association of Commerce under leadership of Tim Sheehy led a task force in 2015 and conducted a needs assessment of this larger portfolio of parks, cultures and sport facilities and funding alternatives for all these needs. The Public Policy Forum was engaged to conduct research on how other communities fund QOL activities.  Sheehy concluded by proposing a sales tax to provide for funding of deferred capital costs among other suggestions. At first the tax proposed was regional, but Sheehy later promoted only a tax in Milwaukee County.

During the last 2016-17 state budget deliberations, this assessment reached a critical juncture as the Milwaukee Bucks sought public support for building a new arena. Because one piece of the larger QOL portfolio became the focal point of the state budget, the focus on the sustainability of other assets in this portfolio was neglected.  While county residents may value parks and culture (giving consent in the past to a sales tax never enacted) more highly than sports, state legislators were able to dictate priority for funding purposes, and Milwaukee County residents are now forced to pay $4 million per year of property taxes for the new arena.

The very purpose of local county government is to provide for the representation of local preferences for use of limited dollars gained from local property taxes. The Economic Development Committee and the Parks Committee of county government reflected these priorities during the sale of the Park East parcel when the arena came into play, and the first hearing by these committees in autumn of 2015 on the sale of Park East land included a review of the parks and culture deficits along with the request for sale of this land for a sports arena.

As Chair of the Economic Development Committee working with then chairwoman Marina Dimitrijevic and the rest of the county board, I believe this committee worked in good faith to explore the QOL needs of our local citizens, not just professional sports. Clearly the main leverage for getting MMAC (many members living outside this county) and the Bucks organization (with out-of-state owners) to consider the needs of the entire QOL portfolio while requesting public funding for an arena was the county ownership of Park East.

County Executive Chris Abele working with Gov. Scott Walker and the Republican controlled legislature obtained enactment of a new state law (2015 Wisconsin Laws, Act 55) removing the county board from oversight of sales of all county land except park land. This law defined park land through reliance on zoning laws, a procedure strictly limited to municipal action, not county, even though the ownership of and investment for the land had been largely county-wide.

This law was enacted as part of the state budget without hearings or input from county residents. It effectively eliminated the last leverage county government could use regarding deficits in the entire QOL portfolio. The WOW communities of Waukesha, Ozaukee and Washington would continue to have access without property taxes comparable to those paid by Milwaukee County residents for this new arena while continuing to have access to any other QOL activities they use. Miller Park, for example, is financed regionally since it is used regionally though located in Milwaukee County while Bradford Beach is used widely yet funded strictly by local financing.

Recently the Bucks completed the final lease agreement on the new arena with the Bradley Center, a non-elected board appointed largely by the governor and Milwaukee mayor. As reported recently by the Milwaukee Journal Sentinel, the Bradley Center will be entitled to payment from the rental of luxury suites reported to be $2.1 million per year until the Bradley Center Board satisfies certain expenses in closing out the old arena and prior leases with the Bucks and Marquette Golden Eagles. No payments were provided for the support of the remainder of the QOL portfolio.

The emerald-necklace concept of Whitnall, Dretzka and other enlightened park planners had helped to create a Milwaukee County Park System with unified planning instead of creating competition among the communities of haves and have nots. This legacy is now unraveling thanks to the leadership of Walker, Abele, and the business community under Sheehy.

No provisions in the newly negotiated lease with the Bradley Center reflect the local priorities. Milwaukee County is facing the loss of the Domes, the Lake Park Bridge, an Olmstead legacy, and other park amenities. The Milwaukee Public Museum is discussing downsizing and the Historical Society occupies a downtown structure that is “shrink-wrapped” to keep its cornice from falling, but no funding was forthcoming for these needs.

In one fell swoop, the county lost all its leverage in working toward a solution for developing sustainable resources to support the entire QOL portfolio. Like a hedge-fund manager, the county executive is spinning off the assets of this portfolio with professional sports getting his highest priority. The very constituents he is elected to represent were being short-changed at the expense of multi-million-dollar basketball players and their owners, many not Abele’s constituents. 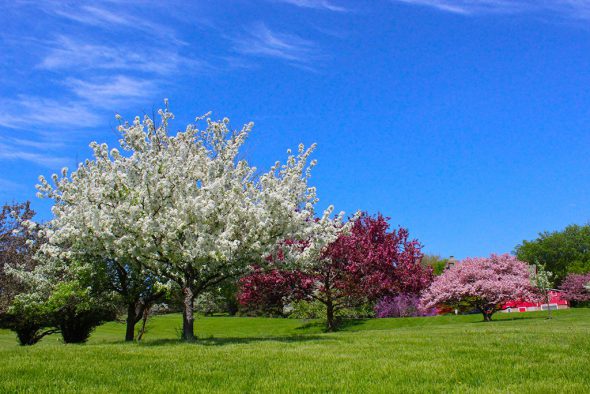 Instead state government under Walker and GOP legislative majorities imposed their will on Milwaukee County residents with the help of the business community under Sheehy. The fact that the county portion of the arena funding is paid by county property taxes, i.e. local taxes, was ignored by the GOP majority who historically had touted local control for local taxing. The WOW communities who largely control state-wide elections have become the robber barons of the QOL in Milwaukee County reminiscent of the ugly days before the Great Depression. These counties only bargain if they want something such as regional sewers or Lake Michigan water. Yet they use the zoo, museums, Marcus Center and regional parks like Bradford and Whitnall and provide no tax support.

Will park and cultural assets now be further divided and spun-off? This appears to be the focus of Abele and Director John Dargle of the parks department under the guise of a long-range plan for the Milwaukee County Parks. The county executive is directing our park administration to find a way to provide 100 percent funding for our parks by 2024 through various enterprise activities, many by privately owned business.

The survey asks questions concerning cutting services or even selling off park land. It also suggests for-profit partnerships which would turn parks into enterprise zones rather than preserving open spaces for the public. It is striking to see the depth of planning here devoted to a marketing strategy of creating new enterprise zones or selling off park land. Single municipalities can change zoning of county parks to enact changes, but not the county board.

The many appointed boards over-seeing our cultural institutions, the Milwaukee Art Museum, Milwaukee County Historical Society, and others are under growing pressure from Abele to do private fund raising while the county tax support is dwindling. These boards are being told there is no funding. The truth is the priority has been placed elsewhere, largely on funding privately owned professional sports. These new dollars will not benefit public parks or public cultural institutions.

County residents have lost locally elected oversight on the sale of county land which was created through county-wide investment, while the robber barons (many from the WOW communities)) who control state elections increasingly determine local priorities and dictate local funding. If this looks like taxation without representation, it strikes the same chord as a GOP dominated gerrymandering of elections.

The disenfranchised working-class voters who have not moved to the WOW communities for lower property taxes along with the CEOs are paying the price. The citizens of West Allis, West Milwaukee, Greenfield, St. Francis, Cudahy, South Milwaukee, Shorewood, and others can’t afford to rent a luxury suite at the arena, yet it is their property tax dollar that will partly pay for the arena and suites not located in their own city and not reaping the economic gain. Yet the CEOs of the largest businesses who generally live in the WOW communities will escape this property tax on their home, but rent the luxury suites.

Even those living within the city, where the new arena will be located, have a right to complain. Funding of private sport does not reflect the local priorities of many of these citizens. They too have been disenfranchised by losing representation of their county supervisor from having any oversight of the spending of the $4 million per year subsidizing the building of a new arena versus funding county parks. Friends of Lake Park want to preserve Lake Park Bridge, but have been told by the county executive through the 2018 budget to raise the money for this project or lose the bridge.

The entire capital budget for parks in the 2018 budget is only $1,158,122 which pales in comparison to the $4 million plus the Bucks development. These Milwaukee citizens lost any say in how this money was to be invested and are also losing beloved county structures like the Olmstead designed bridge and other QOL assets.

Abele has not represented his local constituency or their QOL priorities. Sheehy and the MMAC seemingly have abandoned all promises to help fund our parks and culture once they got the Park East parcel. The local priorities and the quality of life in Milwaukee County are the victims of these robber barons. They are stealing the quality of life of the common man. The common good is no longer a matter of local representation while local tax dollars are grabbed for private purposes but denied for public needs.

Patricia Jursik, attorney, was a Milwaukee County Supervisor, Dist 8, and Chair of Ecnomic Development Committee during negotiations on Park East sale and is a Preserve Our Parks board member.