And Best Place at the Pabst Brewery announces new coffee shop and bar. 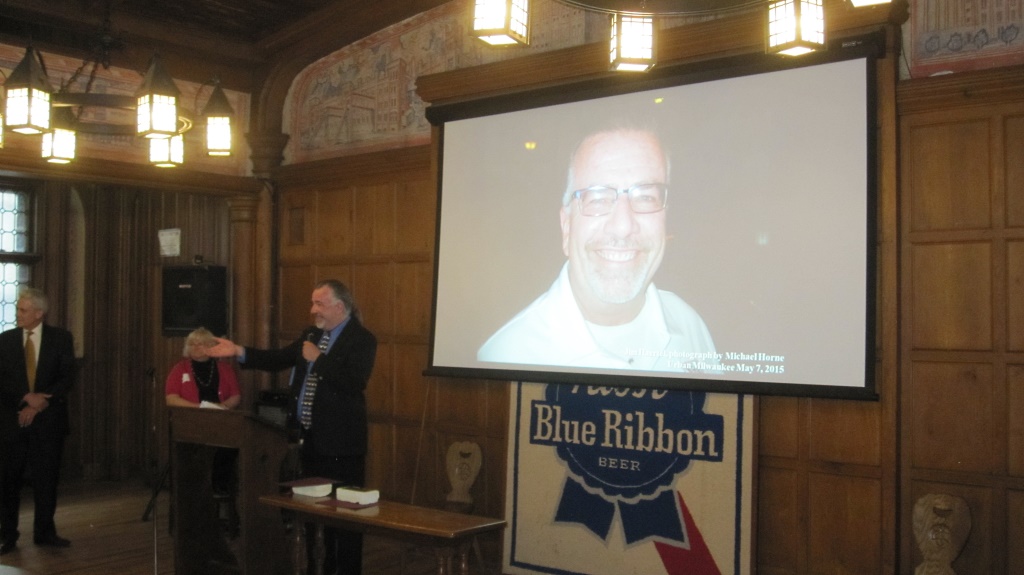 Since 1993 the City of Milwaukee Historic Preservation Commission, the Common Council and the Mayor have issued the Cream of the Cream City awards “to recognize projects large and small which have preserved the rich history of Milwaukee found in its varied architecture from the 19th and 20th centuries. The recipients of these awards have added value to their neighborhoods and Milwaukee by preserving the unique design and character of historically designated properties,” according to its mission statement.

The 2017 awards were again held at the Best Place at the Historic Pabst Brewery, one of the town’s most beautiful bars, on Thursday, in a ceremony attended by nearly 100. This location was an inspired choice, since it is adjacent to two of the “Adaptive Use” awardees: 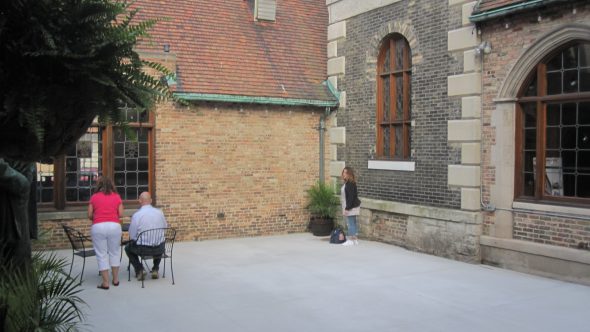 The courtyard. Photo by Michael Horne.

Furthermore, the group’s Preservation Advocacy award was issued to James Haertel, the host and genial proprietor of Best Place who was hailed as the rescuer of the 21-acre complex thanks to the $50,000 option he took out on it in 2001.

“The place was mothballed, but I had a hunch it was salvageable,” Haertel told the attendees. He bought the three buildings he wanted, which now constitute the Best Place and Blue Ribbon Hall, for $50,000, he said, adding “I’m now putting $60,000 into the courtyard alone.” He was referring to the building where a bronze Frederick Pabst gazes upon a concrete slab that will soon be refinished with a tile floor, after the other’s demise had been caused by age, and accelerated by salt. “From now on, we shovel,” Haertel declared. 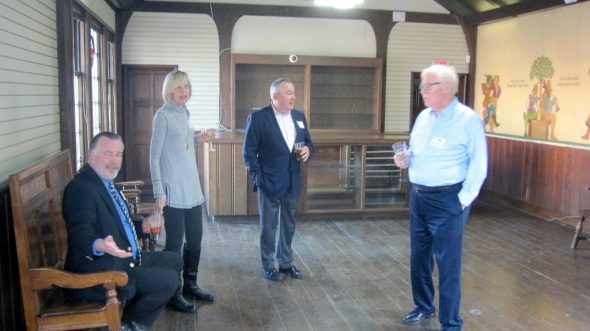 Haertel also gave some attendees a sneak peek at his latest idea: a coffee shop/bar to be located on the site of the former Pabst gift shop, at the southwest corner of N. 9th St. and W. Juneau Ave., and part of the Best Place.

Since the opening of Best Place, this sunny spot had served as its gift shop. Its original function was to serve as the gathering place for tours of the Pabst Brewery. Recently Haertel decided to move the gift shop downstairs, beneath the Blue Ribbon Hall, where it will be closer to the new Pabst Brewery in Building #23, which lacks the space for a gift shop of its own.

“This was a gathering space before,” he said in the hall, which now held only a few wooden chairs with a “P” engraved into their backs. “I figured this would be a natural place for a coffee shop and bar.” In fact, it would considerably aid the traffic flow in the building, which can see periods of high demand.

And once that project is complete? “There are two floors above Best Place,” Haertel said. “I want to refinish them. They might be the most spectacular parts of the whole complex.”

The awards were presented by Ald. Bob Bauman, chairman of the Historic Preservation Commission. He commenced the proceedings once photographer Arlisia McHenry, whom he had summoned for the purpose, had taken her position before his smiling visage.

The eight award winners were each to be issued a Cream City Brick with an engraved plaque testifying to the honor.

Bauman provided a tutorial on the role of historic preservation, and how old buildings sometimes get new lives.

He remembered seeing a fire some time ago at the Pfister and Vogel Beam House, thinking the building would be a goner.

But, surprise! — “Those old timber buildings burn themselves out before structural damage, especially with the old-growth wood.” And thus the Beam House survived to become the River Place Lofts, and received the “Back from the Brink” award, which was accepted by Erik Madisen of Madisen Maher Architects.

Bauman gave a Residential Restoration award to the Emanuel Adler House, 1681 N. Prospect Ave., at the southwest corner of E. Brady St., saying “each generation diminished something of architectural interest in the house.” These faults have been remedied, thanks to the work of Daniel Wilhelms, who accepted his brick award.

The Pabst Bottlehouse filled a gap in the amenities at The Brewery, as the complex is now known, in that it includes a food court in its 250,000 square feet, the largest building in the development. People had moved into the area and couldn’t find a place to get necessities, Bauman said. Typically, retail follows residential, so there is a service gap that exists until the market fills it, and it appears things are on the way here.

Another Residential Restoration award went to the Judge Jason Downer House at 1201 N. Prospect Ave. at the northwest corner of W. Juneau Ave. This building was restored as a library for the Milwaukee Art Museum after exhaustive work by architectural historian H. Russell Zimmermann, who was at the event.

Bauman took greatest pleasure in announcing an award to the city itself for the rehabilitation of the H. J. Geerlings house, which had been redone by city crews, the work of which Bauman observed closely and praised. The home at 2844 W. Kilbourn is now offered for sale to an owner-occupant for $40,000, and Bauman expressed a personal interest in seeing that this home, in his district, gain a suitable owner soon. “It’s across the street from my house!” he exclaimed. However the brick remained unclaimed, with no appropriate city employee on hand to pick it up, which you could see bugged Bauman. If a brick’s not picked up, there remains a temptation to throw it. Anybody want a brick?

That changed when the commission was transferred to the offices of City Clerk Jim Owczarski, who was in attendance at the awards ceremony. Owczarski thought the city’s historic preservation efforts should be given their own space and event, as was the case that evening.

The city clerk said his son will soon appear in Sendik’s advertisements, and that the occasional royalty checks come as a pleasant surprise. They are directed into the boy’s college education fund, to the pleasure of the Owczarski family tax accountant, and to the disappointment of the nominal recipient.

“Dad, when can I have my money?” the boy asked. “When you’re 21,” Owczarski replied most Scrooge-like.

The Ebenezer Scrooge analogy is appropriate, since the kid pulled in a bundle of money last Christmas appearing as Tiny Tim in the Rep’s production of the Christmas Carol. Owczarski, who is paid $99,512.79 as clerk, lamented, “on an hourly basis, he makes more than I do.” Casting is already underway for this winter’s production, and there is an expectation of further royalty checks in the Owczarski college fund.

Richard Stefanek came to the event from his residence at St. John’s on the Lake. He said that E. J. Brumder, the genealogist of Milwaukee’s German elite, was unable to attend due to a recent hip replacement, so the party was missing a bit of its sparkle. Yance Marti of the Department of Public Works was also at the event, and spent some time talking with Brian Fette, who does research for Spaces and Traces and Doors Open. Architect Jim Shields took in the pageantry of the moment, while Carlen Hatala of the preservation commission ran the slide show that went on behind Bauman’s remarks. It hovered lovingly on an image of Haertel taken by this reporter for an Urban Milwaukee story. We approve.

Bauman’s former colleague, Mike D’Amato, was also at the event. He particularly relished Haertel’s story of his exploits trying to open Best Place, a circuitous journey riddled with false starts, dead-ends, U-turns and a successful side trip to the Wisconsin Supreme Court. D’Amato led the council’s charge against a Cleveland developer’s planned “Pabst City” entertainment district that had been championed by Mayor Tom Barrett. All now concede that Pabst City would have been a disaster unlikely to recoup its proposed city development subsidy. As Haertel added, the current iteration saved many more buildings than the original proposal, and that is a victory for historic preservation. 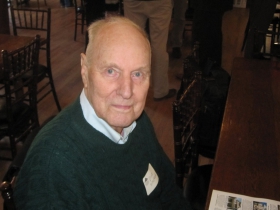 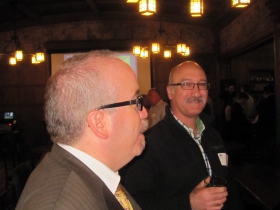 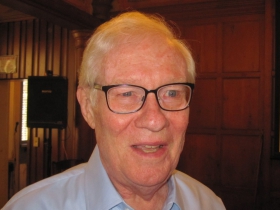 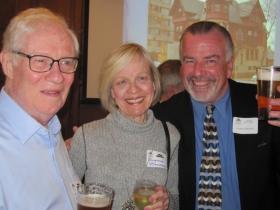 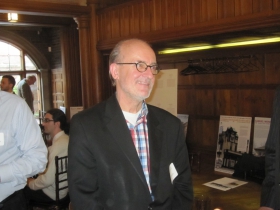 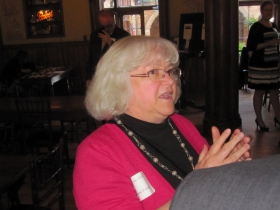