At risk are 1.2 million Wisconsinites.

By Jon Peacock, Wisconsin Budget Project - May 25th, 2017 11:13 am
Get a daily rundown of the top stories on Urban Milwaukee

In order to pay for huge tax cuts for corporations and wealthy Americans, the President is proposing massive Medicaid cuts – far beyond the amounts contained in the House plan to “repeal and replace” the Affordable Care Act.

Whereas the House-passed bill is now projected to cut Medicaid by $834 billion over the next 10 years, the Trump budget unveiled this week would cut Medicaid by about $1.3 trillion, according to an analysis by the Center on Budget and Policy Priorities (CBPP). The following bar graph illustrates how those cuts would get deeper over time. 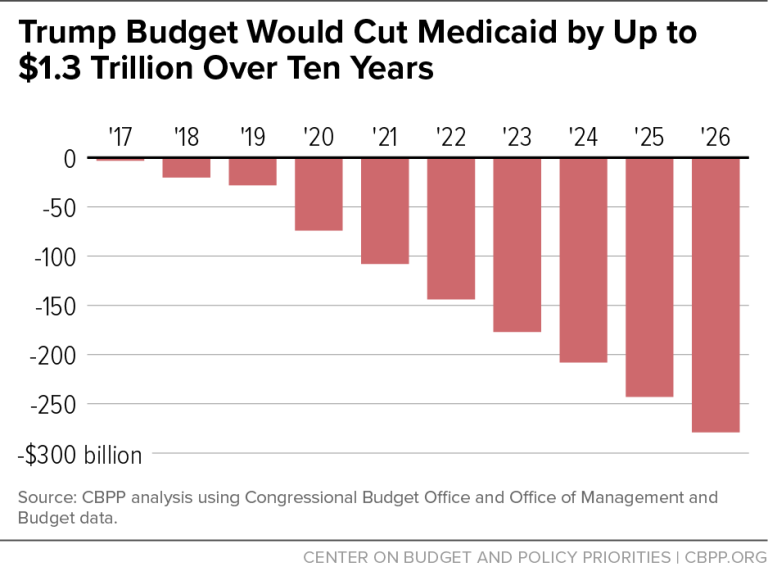 Trump Budget Would Cut Medicaid by Up to $1.3 Trillion Over Ten Years

The President’s budget endorses the Medicaid cuts in the House bill, known as the American Health Care Act (AHCA), but cuts much deeper. The CBPP analysis estimated the annual impact for the next ten years by combining the initial Congressional Budget Office  (CBO) assessment of the effects of AHCA with the Office of Management and Budget’s projections of the effects of Trump’s additional Medicaid cuts. CBPP concluded:

By 2026, the cut would equal $279 billion — a 45 percent reduction — relative to current law, and it would keep growing in subsequent years.

The massive Medicaid cuts recommended by President Trump vividly illustrate one of the main problems with changing Medicaid by transforming it into a program that is capped or turned into a block grant. Once that fundamental change has been made, federal lawmakers will keep cutting more – every time they are inclined to cut taxes for the rich or to spend more for defense contracts.

The President’s budget not only cuts much deeper, it also speeds up the impact of the cuts and targets a program that has long enjoyed broad, bipartisan support – the Children’s Health Insurance Program (CHIP). It eliminates an increase in the federal share of CHIP financing and prohibits the use of CHIP funds for children in families with incomes above 250% of the federal poverty level (FPL).

Another one of the likely early effects of the Trump budget, if it’s approved, would come from the elimination of the ACA requirement that states must maintain at least their current eligibility standard for children. That would permit the Walker administration to implement premium increases for children’s coverage and other changes approved by the legislature several years ago. The Legislative Fiscal Bureau estimated at the time that those changes would cause about 29,000 children to lose their BadgerCare coverage.

Over the longer term the much bigger concern about both AHCA and the Trump budget is that converting Medicaid into a capped program or block grant will almost certainly result in an ongoing series of deeper cuts. That point is driven home by the fact that Trump is dramatically increasing the size of the cuts, even though he has promised on many occasions to protect Medicaid.

The risk of larger and larger cuts after a program has been capped or changed into a block grant is also made clear by the following aspects of the President’s budget:

There are currently almost 1.2 million Wisconsinites who participate in Medicaid funded programs, and whose health care will be at risk if the President’s proposals are approved. That includes about 500,000 children, 167,000 people with disabilities, and 65,000 seniors in nursing homes.

A new report by the Wisconsin Council on Children and Families includes county-level data on the number of people who could be affected by cuts to Medicaid, or by changes to coverage through Marketplace insurance plans.  We have also prepared a one-page fact sheet for every county.