By Tamarine Cornelius, Wisconsin Budget Project - Apr 28th, 2017 11:16 am
Get a daily rundown of the top stories on Urban Milwaukee

Governor Walker and other state lawmakers have said they are open to redirecting money from a pot intended to support education, health care, and safe communities, and using the money for roads instead. That approach could lead to future budget cuts that damage academic opportunities for Wisconsin schoolchildren, lengthen the amount of time to graduation for University of Wisconsin students, and make it harder for communities to afford important services like trash collection and street cleaning.

A natural solution to this quandary would be to increase the amount of money coming into the Transportation Fund by removing the freeze on the gas tax and letting it rise with inflation. Another common-sense approach would be to pare back planned highway projects to fit the amount of revenue available.

But state lawmakers are taking a look at a third approach: using money from Wisconsin’s General Fund to spend on highways and other transportation projects. Taking resources from the General Fund would give lawmakers the luxury of putting off finding a permanent solution to the imbalance in the Transportation Fund, but would shortchange Wisconsin school children, families, and workers. 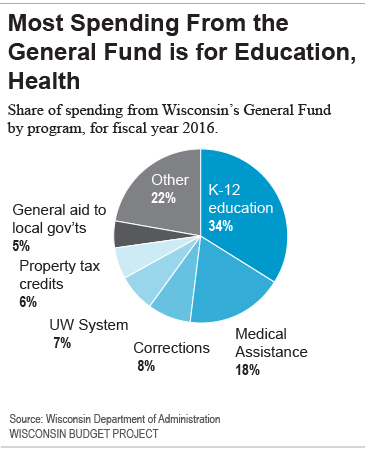 Most Spending From the General Fund is for Education, Health 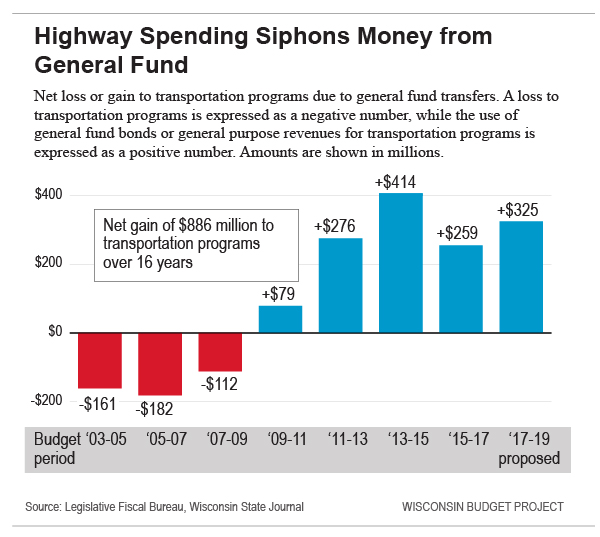 (The Wisconsin Constitution prohibits transferring money out of the Transportation Fund to use for other public services. But the amendment does nothing to prohibit transfers in the other direction – using money from the General Fund for transportation purposes.)

In a sense, lawmakers want to have their cake and eat it too: They want to keep the freeze on the gas tax and not let it rise with inflation, but still fund all their favorite road projects. They need to take a hard look at increasing the gas tax or scaling back highway projects, rather than using money from the General Fund and taking resources away from state priorities that make Wisconsin a great place to live – priorities like excellent public schools, safe communities, and accessible higher education.

One thought on “Wisconsin Budget: Robbing General Fund for Roads?”