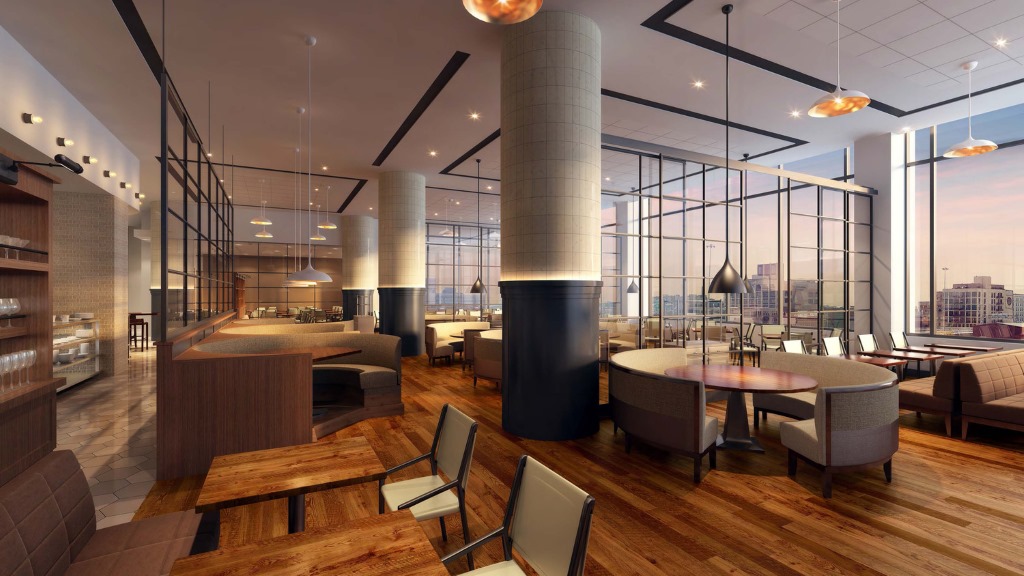 The new Westin Hotel in downtown Milwaukee, which is scheduled to open June 27, will feature an Italian-American steakhouse named Stella Van Buren. The restaurant is scheduled for a June 1 opening.

According the Milwaukee Business Journal, the restaurant will combine elements of a classic Italian kitchen with American steakhouse influences and will feature a large wine and bourbon selection. It will feature 45 tables in the restaurant and 50 seats in the bar. Writer Dan Shafer offers more details:

Westin Milwaukee, a nine-story, 220-room hotel located on East Michigan Street, will be the first Westin-branded hotel in Wisconsin.

The Westin and Stella Van Buren will be located at 550 N. Van Buren St., just a few blocks from the lakefront.

On the Bus Comes to Public Market

Milwaukee Public Market announced that a new vegan and vegetarian focused option will be opening in June next to Thief Wine and across from Kehr’s Candies.

On the Bus, owned by Emily Ware, plans to sell plant-based and “super food” offerings from inside the Public Market, but using a renovated 1971 Volkswagen Bus to create a unique retail space. The press release offers more details:

Ware is working to renovate a Volkswagen Bus, which was the first vehicle she owned, to act as the main focal point of her counter space. Many of the products on the menu will cater to morning customers and expand the breakfast business at the market. Ware anticipates a significant amount of her product line will be made in house – including almond milk, veggie burgers, kale chips and vegan ice cream. Many of the items on the menu, such as smoothies, acai bowls, and sandwiches, will be made to order in front of the customer.

“We’re here to show Milwaukee that plant-based foods can be prepared in such a way that you’d never think for a second that anything is missing,” said Ware. “It’s my belief vegan food can be just as delicious, if not better, than their non-plant based counterparts.”

According to Lori Fredrich of OnMilwaukee.com, “the counter-service café will offer scratch-made bakery items including muffins, scones and coffee cake, along with desserts like layer cakes, tarts and other pastries.”  She offers more details here:

The bakery and cafe will be owned and operated by Molly Sullivan, pastry chef at Black Shoe Hospitality, operators of Blue’s Egg, Maxie’s and Story Hill BKC… Sullivan says the shop was inspired by some of the “really beautiful” cafes she encountered when she studied abroad in Paris during college.

Breakfast and lunch will be primarily grab-and-go items, with an emphasis on seasonal, local and healthy options, as well as dishes for both vegan and vegetarians, says Sullivan. Options will include ancient grains breakfast bowls, housemade granola and lunch items like baked corn chips with vegan dips. Sullivan also plans to cure her own salmon, which she’ll use for sandwiches and to serve with house-made bagels.

This week the city celebrates the second annual Milwaukee Black Restaurant Week through April 23. The celebration of African-American owned restaurants is sponsored by BlankSpace MKE, an urban art cooperative whose mission is to serve as a conduit for “cooperative economics.” No coupons are needed and each restaurant has its own specials.

The full list of 16 restaurants participating can be found here.

Portillo’s, the Chicagoland restaurant chain best known for its Chicago-style hot dogs, Italian beef sandwiches, char-grilled burgers, fresh salads and chocolate cake, had its second Wisconsin location open this week at 8705 W. Sura Lane in Greenfield. The chain, which goes back to its original restaurant opened in 1963, now has some 50 restaurants in six states.