By Tamarine Cornelius, Wisconsin Budget Project - Apr 18th, 2017 03:08 pm
Get a daily rundown of the top stories on Urban Milwaukee

Wisconsin is a better place when we all do well. Unfortunately, while the wealthiest have seen their incomes skyrocket in recent decades, incomes have stagnated for the middle class and those who struggle hardest to make ends meet. It’s becoming harder to make it to the middle class and stay there.

Wisconsin’s state and local tax system, like the tax systems in most states, makes this problem worse. If you look at who pays taxes in Wisconsin, it turns out that middle-class and low-income families pay a bigger share of their incomes in state and local taxes than the wealthiest households in the state. We call on financially-stressed families to pay 8.9 cents out of every dollar they earn in state and local taxes, while the wealthiest households pay just 6.2 cents out of every dollar of income. And many corporations pay little or nothing in income taxes. 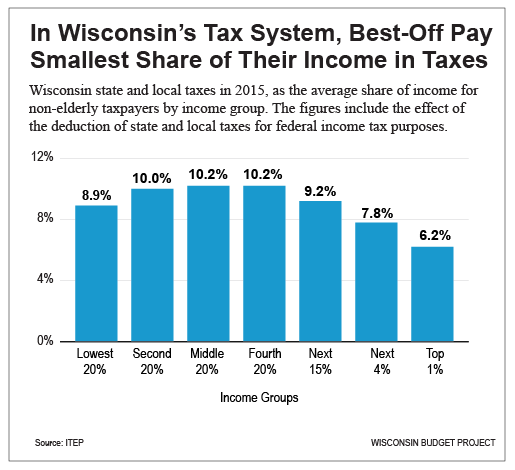 Wisconsin’s middle class, once one of the strongest in the country, has shrunk more quickly than in any other state. That trend should set off alarm bells for state policymakers, who should be using the tax system and other tools to help people work their way up the economic ladder. Instead, state lawmakers have focused on passing tax cuts that give big benefits to powerful special interests and do little or nothing to improve the lives of Wisconsin residents with modest incomes.

Examples of recent state tax cuts that are slanted in favor of the wealthy and well-connected include:

In Wisconsin, the top 1% is thriving, with the share of income going to the top 1% in Wisconsin reaching record levels. We need to make sure our tax system doesn’t give the top 1% an additional advantage at the expense of taxpayers of more modest means.  Instead of looking for new ways to cut taxes for people with the highest incomes, state lawmakers should turn their attention to making investments that help Wisconsin communities and families thrive.