The Rise in Pedestrian Deaths 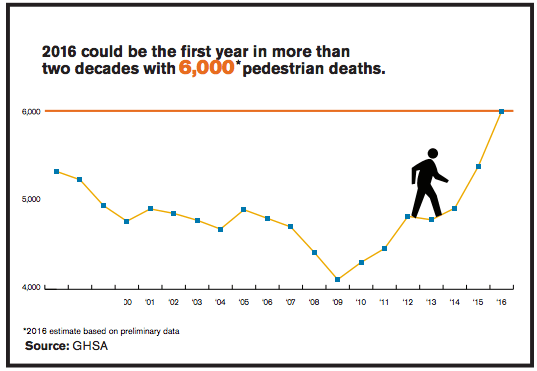 If America is going to turn this around, the people who design streets and transportation systems will have to accept responsibility. Graph: GHSA

A report on America’s rising pedestrian death toll released by the Governors Highway Safety Association [PDF] estimates that about 6,000 people were killed while walking last year — the highest number in two decades. That’s a 22 percent increase over just two years, significantly higher than the overall increase in traffic deaths.

The GHSA notes that vehicle safety technology has improved quite a bit in recent decades, reducing fatalities for drivers, while pedestrians have no such advantage.

There are certainly ways to protect people walking, however. Namely, streets can be designed so fewer drivers travel at lethal speeds. But these solutions don’t get much attention from agencies like the GHSA or the National Highway Traffic Safety Administration.

Instead, America’s traffic safety establishment has long been focused on “behavioral” explanations for traffic deaths — things like seatbelt usage and drunk driving. And that makes sense, to a point: Government interventions to promote seatbelts and discourage driving under the influence have made driving safer.

But the limitations of that approach are all too apparent as America continues to fall further behind other nations on traffic safety. Countries that have made it a priority to limit motorist speed in crowded places are faring much better than we are. Tens of thousands of lives would be saved each year if the U.S. achieved a safety record comparable to nations like the UK, Germany, or Japan.

For the state DOTs that shape streets and transportation policy, there must be something comforting in the behavioral explanations. By ignoring the role of the high-speed, car-centric transportation systems they’ve created, they don’t have to face their own culpability. They are absolved every time a report comes out on rising pedestrian deaths and the news cycle responds with a round of stories about “distracted walking.”

We know street design is part of this problem because there are patterns to where fatal collisions occur. Heat maps of pedestrian fatalities show that pedestrians are struck and killed by cars at the same intersections and along the same corridors over and over again. Are people using cell phones more in these locations? I doubt it. Street design plays a clear role.

There are plenty of transportation engineers fighting for safer street design. Engineers Peter Furth and Ian Lockwood, for instance, cities should make pedestrian safety and convenience, not traffic movement, a higher priority. Several city DOTs are starting to prioritize walking and biking in their official practice as well. But this attitude has yet to penetrate the core institutions of the American engineering establishment.

At the obscure but influential National Committee on Uniform Traffic Control Devices, which shapes the street design standards followed by engineers around the country, change comes very slowly.

When Streetsblog talked to committee chair Lee Billingsley a few weeks ago, he said the group had no plans to shift course in response to rising fatalities. He insisted that rules governing pedestrian signal timing, for instance, “have stood the test of time,” even as America’s pedestrian safety record has deteriorated.

How many people will die before the traffic safety establishment does some soul searching about the systems they’ve designed and starts reforming practices that have needlessly put people at risk?

7 thoughts on “Streetsblog: The Rise in Pedestrian Deaths”