By Tamarine Cornelius, Wisconsin Budget Project - Mar 31st, 2017 10:49 am
Get a daily rundown of the top stories on Urban Milwaukee

President Donald Trump has released an outline of a federal budget that would make it harder for Wisconsin families to make ends meet, harm the environment, and make it less likely for students to graduate –  leaving the state on the hook to make up some of the difference. His budget won’t do much to “make America great again,” but it would harm Wisconsin residents in very specific ways. Here are five of them:

1. By making it harder for Wisconsin residents to stay warm in the winter.

2. By making it more difficult for struggling students to keep out of trouble and stay in school.

Trump’s budget zeroes out funding for community learning centers, which provide after-school programs for students in school districts in low-income areas. Wisconsin has more than 200 community learning centers, which receive $15 million in federal funding. This cut would harm students in every corner of Wisconsin – from Barron County, where the Boys and Girls club would lose $100,000 in funding, to Racine, where the school district would lose $600,000 to provide services to students.

Community learning centers get results, despite the claims of Trump’s budget director.  An evaluation of Wisconsin community learning centers showed that the centers helped students miss fewer days of school and have fewer out-of-school suspensions. Students participating in the programs were more likely to graduate from high school, and more likely to continue their education after high school.

3. By making it harder to keep Wisconsin shorelines clean.

Presidents Trump’s budget wipes out $300 million in funding for the Great Lakes Restoration Initiative, which pays for projects that improve water quality, protect and restore native habitats and species, and address environmental problems in Wisconsin and other Great Lakes states.

In Wisconsin, eliminating the Great Lakes Restoration Initiative would mean the loss of resources that fund green infrastructure projects to improve public health and water quality for shoreline cities. Examples of projects funded in 2016 include:

Wisconsin Governor Scott Walker opposes Trump’s proposed cuts to Great Lakes funding, saying that “the Great Lakes are an incredible asset. They’re an asset from a commercial standpoint in terms of fishing and tourism, but also in general in terms of quality of life.”

4. By denying equal access justice to people with low incomes.

Trump’s budget axes the Legal Services Corporation, which in 2016 provided $5 million to organizations in Wisconsin to provide free legal services for people who can’t afford a lawyer. Last year, almost 16,000 Wisconsin residents were helped by these legal services.

5. By shifting costs to our state government and making it harder to balance the state budget.

Federal money makes up almost a third of the Wisconsin state budget. That means that out of every dollar the state spends, 29 cents comes from the federal government. Federal money in Wisconsin’s budget provides health care coverage for families and individuals with low incomes, supports research at the University of Wisconsin, and strengthens Wisconsin’s transportation network.

Federal resources are critical to making investments in Wisconsin’s workforce, education, and communities that are necessary for businesses and families to thrive – yet Trump’s budget would cut the money coming into the state, leaving Wisconsin on the hook to make up part of the nearly $11 billion per year in these federal investments. 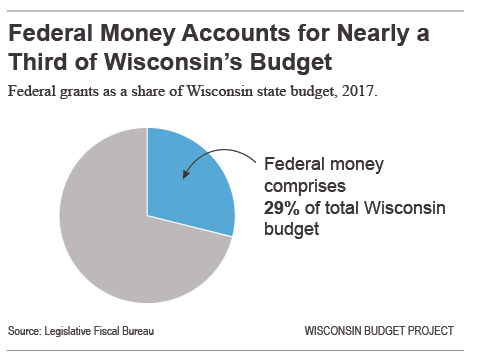 The Federal Government and Wisconsin Budget

These are just a few examples taken from a budget proposal that would harm Wisconsin families, schools, and communities in a myriad of ways. Read more about the Trump budget proposal: Trump Budget Harms Those he Promised to Help.