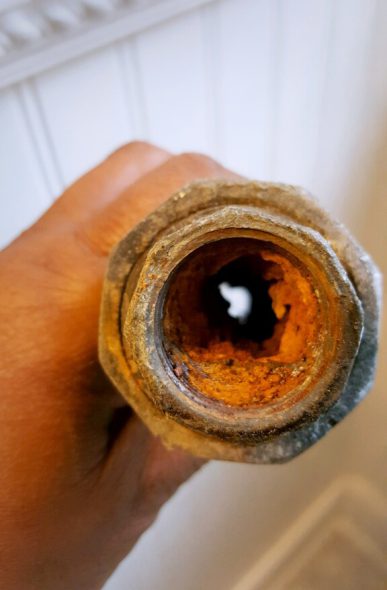 State Rep. LaTonya Johnson, D-Milwaukee, holds corroded galvanized plumbing that was removed from her Milwaukee house. Galvanized pipes, likely to be in older homes, can accumulate lead from service lines, such as the one supplying Johnson’s home. Johnson operated a home day care for several years before running for public office. Photo courtesy of LaTonya Johnson.

Assembly Rep. Melissa Sargent (D-Madison) penned another great op-ed in the Capital Times, in which she expresses her disgust and concern over the discovery of lead in Madison School District drinking fountains.

Her whole op-ed is worth a read, but these words specifically stuck out to me (emphasis added in bold):

It’s time for the Wisconsin Legislature to stop playing politics to start addressing the lead crisis in Wisconsin. As MMSD’s recent lead level tests demonstrate, even cities like Madison, which replaced all of its lead pipes 16 years ago, are not impervious to serious lead-related issues. But the fact is, most cities in Wisconsin aren’t Madison; many communities do still have lead pipes.

From Douglas to Manitowoc, Milwaukee to Marathon, and Brown to Rock, counties across Wisconsin have more than 176,000 lead services lines delivering water to homes and businesses. And it’s not just our water and pipes — Wisconsin’s number of old homes with lead-based paint is higher than average, and soil in areas around Wisconsin have high lead concentrations, affecting our locally grown crops and agriculture.

Lead poisoning is a serious issue that demands immediate action. While attention is (deservedly) given to Flint, Michigan, and its own lead crisis, Wisconsin was recently given an “F” rating for its failure to address the lead crisis specifically in school drinking water.

We cannot accept this. Our government leadership in Wisconsin needs to step up on this issue. Lead seriously harms the developing mind, and can result in reduced IQ, learning disabilities, and other irreversible problems in the future. When one in every 12 kids in Wisconsin has elevated lead levels in their blood, it requires serious action on the part of our elected leaders.

Democrats have addressed this issue by calling attention to it and demanding their colleagues across the aisle help them to do something. Republicans, meanwhile, have done little to nothing on the lead crisis in Wisconsin. It’s not too late — they should show true leadership to ensure our children aren’t being poisoned on a daily basis.