A County Agenda For Black Community?

By Jabril Faraj, Milwaukee Neighborhood News Service - Feb 8th, 2017 10:15 am
Get a daily rundown of the top stories on Urban Milwaukee 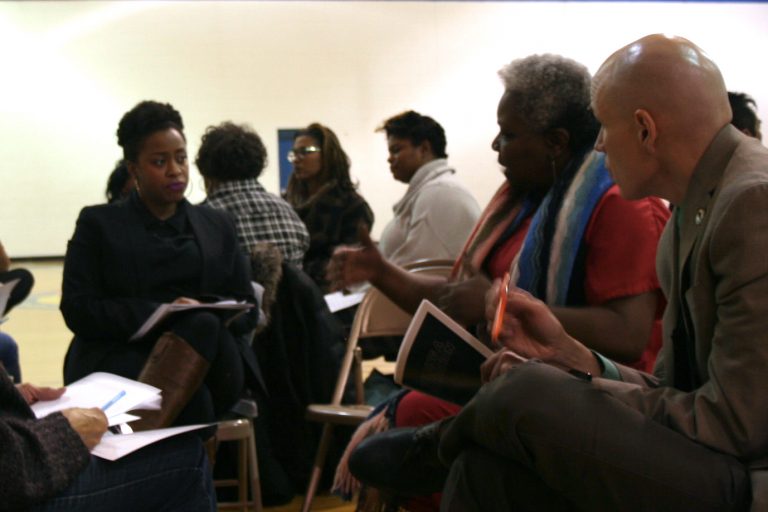 Terra McKinney (left) listens to another attendee at the event. Photo by Jabril Faraj.

The Milwaukee County Office on African American Affairs recently held a listening session to solicit feedback from residents on a legislative agenda that it hopes will create significant, tangible change for the area’s black community. The agenda, which is focused on garnering bipartisan support, includes measures that would increase funding for workforce development programs, reform the criminal justice system and increase access to employment and work incentives.

“We are interested in productivity. We want to get stuff done, we want to put some points on the board,” said Nate Holton, chief of staff for County Executive Chris Abele. “We want to get legislation signed into law.”

The Office on African American Affairs (OAAA), which was created in November 2015 by then-county supervisor Khalif Rainey, has been mired by questions of funding, staffing and what the office would seek to achieve.

Rainey, who is now District 7 alderman, criticized what he said was a lack of action by the office in the 15 months since its creation. “In that time, we’ve seen no improvement in the joblessness … the education, and we’ve seen unrest,” he said, referring to the sometimes-violent demonstrations that swept through Sherman Park last August.

“This is the issue of our time,” Rainey said at the listening session, which was held at the COA Goldin Center, located in the 53206 ZIP code. More than 47 percent of 53206 residents, 94 percent of whom are black, live in poverty. “Considering the dire need that we have right outside this door, you know, I think it should be a priority.” 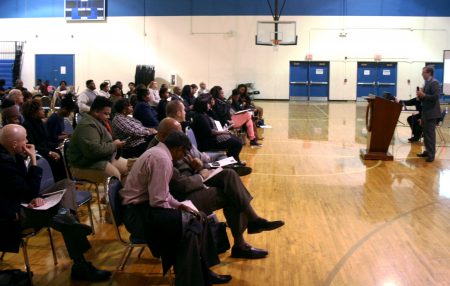 According to the 2017 adopted county budget, $267,170 has been budgeted for OAAA, after the office received no funding in 2015 and 2016. A director has yet to be hired and three of four positions within the office are still vacant. Another $300,000 has been set aside and will be approved by the county board once a director is in place— which Holton said he hopes will happen by spring —and a plan to spend the funds has been approved.

“Once we’re staffed up, that’s going to allow us to take the next step forward,” Holton said.

OAAA has outlined a strategy that utilizes community input to define issues central to Milwaukee’s black community and to influence policy and develop programs “related to the special needs of African Americans,” according to its website. The office is working on an analysis of African-American-owned businesses in the city and has held previous listening sessions focused on segregation and workforce development. It plans to continue the practice, said Abele.

The fourth and most recent session focused on how items such as increasing the Earned Income Tax Credit, doubling funding for apprenticeships, expanding expungement access and “Ban the Box” legislation would affect participants or people they know.

Shanyeill McCloud, founder of Clean Slate Milwaukee, an organization that works with individuals to expunge their records, said a prior conviction can affect a person’s ability to get a job, find housing and pursue educational opportunities. In Milwaukee County more than half of African American men in their 30s have served time in state prison.

To expunge a non-violent felony, state law requires the individual to have been younger than 25 at the time of the offense, no matter how long it has been since the offense, a policy that lags behind nearby states. McCloud hopes to see a 2009 law that allowed for felony expungement made retroactive.

“What are we gaining by holding those people back?” McCloud asked.

To that end, OAAA is working with a local black-owned company to scrape data from the Wisconsin Circuit Court Access Portal (CCAP) to be able to better show how prior convictions are affecting the community as a whole.

Republicans hold majorities in both houses of the state legislature, and almost a two-thirds majority in the assembly, which has caused OAAA to focus its agenda on measures it expects will garner support from Democrats and Republicans. McCloud said she has had a handful of one-on-one conversations with Republican legislators regarding the expungement bill and, so far, has received a positive response.

“The legislature is what it is right now,” said Holton, a Democrat. “Either we can stand up and work with them and try to get some stuff done, and move the ball a little bit, or we can just bail and not get anything done, and yell and scream about it, and allow all of our issues to persist.”

Still, some attendees said there are deeper issues that need to be addressed. Terra McKinney, who has lived in Milwaukee since 1996, pointed to a “racial divide” that often doesn’t allow for good-faith dialogue. “You know, you can read the word ‘collaboration’ on a piece of paper but, unless [there are] two sets of rational people there to actually want to get to some sort of a solution, it doesn’t really make sense,” McKinney said.

Hart-Richardson agreed. “Any time you have a situation like you have in 53206, it’s not by accident, it’s by design,” she said. “The way out is to have a true conversation and get about trying to restore some of it. We’re hurting people. What example, right now, are we showing?”

Holton encouraged attendees to contact their representatives and share their stories about how this legislation may affect them, their friends or family. He added that those type of stories often help to pass laws. “We need to hear them, and we need to make sure that the legislator hears them.”

“We’re always stronger together, and we can accomplish more if we work together,” Holton said. “If we stay in silos we’re not going to get very far.”

One thought on “A County Agenda For Black Community?”