11 claimants will get $22 million tax break under Manufacturing and Agriculture Credit.

By Tamarine Cornelius, Wisconsin Budget Project - Feb 3rd, 2017 09:46 am
Get a daily rundown of the top stories on Urban Milwaukee

A tax break that has cost far more than originally anticipated has resulted in enormous tax breaks for a wealthy few, according to a new analysis from the Wisconsin Budget Project.

The Manufacturing and Agriculture Credit nearly wipes out state income tax liability for manufacturers and agricultural producers in Wisconsin. Only about three out of every thousand individual income tax filers receive this tax break, but in 2017 alone the credit will cost the state $299 million in reduced revenue. Looking ahead, the cost of the credit swells even more, ballooning to more than $650 million for the upcoming two-year budget period that starts in July 2017.

The cost of this tax cut has taken lawmakers by surprise. In fact, the credit is now estimated to cost more than double what lawmakers originally thought when the amendment creating the credit was quietly slipped into the 2011-13 budget bill.

Nearly all the value of the tax break goes to the very wealthy. In fact, just 11 claimants, all of which had incomes of $30 million or more, receive an estimated combined tax break of $22 million in 2017. That works out to an average tax break of more than $2 million each. 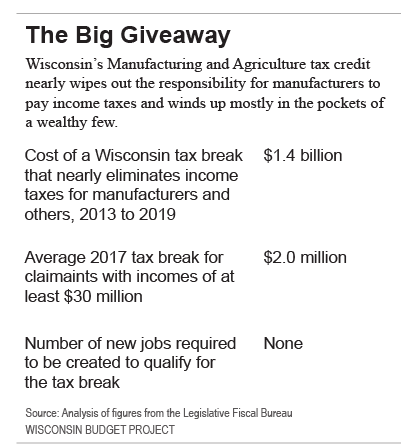 What are Wisconsin residents getting in exchange for a runaway tax cut that benefits only a few? Very little. In fact, there is no requirement that manufacturers create even a single new job in order to be eligible to receive this credit. Manufacturers that lay off workers, move jobs overseas, and close facilities can still receive the tax break.

The Manufacturing and Agriculture credit is the latest example of a counter-productive tax-cutting agenda in Wisconsin. The focus on cutting taxes has done little to boost job creation, but has reduced the resources needed to make the kind of public investments that make Wisconsin a great place to live, work, and do business.  Wisconsin’s cuts in state support to public schools are among the largest in the country, endangering the strong public education system that gives Wisconsin students one of the best educations in the country. Wisconsin has also made deep cuts to the University of Wisconsin System, making it harder for universities to add classes in high-demand fields, and for students to graduate on time. Instead of investing in our schools and higher education system, Wisconsin has prioritized tax cuts like this one, which wind up mostly in the pockets of the wealthy and do little to boost employment.

For more about problems with the Manufacturing and Agriculture Credit, read The Big Giveaway is Getting Bigger: Updated Figures Show Growing Tax Credit is Inefficient, Costly.