More than half of school districts face “extreme shortages” of math, science teachers.

By Tamarine Cornelius, Wisconsin Budget Project - Jan 13th, 2017 11:37 am
Get a daily rundown of the top stories on Urban Milwaukee 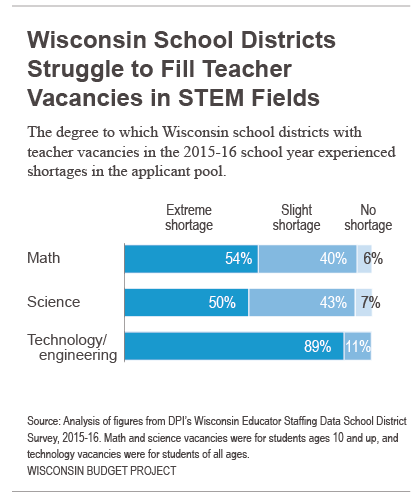 Many Wisconsin school districts are having a difficult time finding well-qualified teachers, with the scarcity particularly pronounced in northern Wisconsin, according to a new report released today from the Wisconsin Budget Project.

In northern Wisconsin, school districts faced “extreme shortages” in filling 56% of teacher vacancies, compared to 46% in the rest of the state, based on a statewide survey conducted by the Wisconsin Department of Public Instruction. The survey defined “extreme shortage” to mean that a school district received few applicants for the job opening and few, if any, high-quality candidates.

The shortage is particularly acute for teachers of math, science, and technology. More than half of school districts with vacancies in these fields faced extreme shortages in hiring teachers.

In the survey, districts indicated that the most commonly-used strategy to hire a teacher in the face of shortages in a variety of subjects was for the hiring district to lower its standards. In hiring for about one of out of five vacancies, districts hired a teacher below the desired standard of experience or quality. Other frequently-used strategies used to address shortages were:

The DPI survey only includes information from one year, so we don’t know the extent to which the dramatic reduction in resources for Wisconsin’s public schools has driven teachers out of the profession and exacerbated shortages in Wisconsin. Given that school district spending on employee salaries and benefits in Wisconsin has fallen sharply – by 7.4% between 2004 and 2015 – it’s not surprising teaching is becoming a less attractive profession compared to other potential career paths. The difficulty in finding teachers also occurs in the wake of Act 10, which reduced job security for teachers and gave them less control over their work environments, in addition to reducing their take-home pay.

For more information about school spending in Wisconsin, teacher shortages, and the shortfall of teachers of color, read Budget Cuts and Teacher Shortages: With Fewer Resources, Schools Struggle to Find Educators.