East Side soccer bar will get one heck of a beer garden under a major expansion plan. 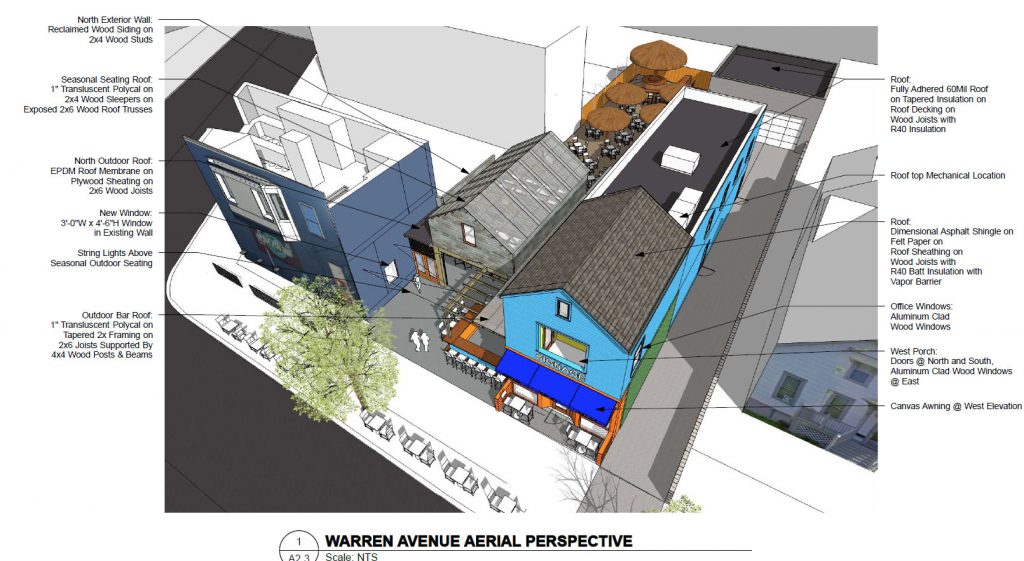 A Brady Street institution is primed to build a major expansion under plans approved today by the city’s Historic Preservation Commission. Designed by Chris Socha and his team at The Kubala Washatko Architects UrbanLab, the latest Nomad World Pub plans would expand the soccer-crazy bar at 1401 E. Brady St. by redeveloping the current, temporary beer garden into a year-round space and adding an additional building to the south. The new complex is targeted to open by June 1st.

Mike Eitel opened the bar in 1995 and has operated it ever since. This plan is his second move south in recent years, with a house from 1873 being slated for demolition this time. The 1873 building, which isn’t historically protected, most recently housed Annie’s Thrift Shop on the first floor. Eitel notes the building is in “condemn-able” shape, while Socha adds that Eitel “couldn’t possibly rehab this in good faith.” Replacing it will be a building with similar massing, yet also compatible with the Americans with Disabilities Act. The first floor of the new, wood building would house a kitchen to support the bar and the second floor would be used as an office space. The city’s historic preservation staff met the proposal with approval following a handful of design tweaks agreed to by the architect.

During his testimony Socha said the beer garden is “only seasonal in that it will have a different purpose year round.” The highly configurable space will include garage doors, standard fare for TKWA designs, that open and close a covered space in the middle of the complex. According to the architect, the space will be designed with an emphasis on shade for the summer that will convert to what Socha calls a “winter garden” for the colder months.

True to the pub and its eclectic neighborhood, the new bar would have a colorful design. The upper floor of the new building would be painted a blue that is certain to have some neighbors talking.

At a November meeting about the project, area alderman Nik Kovac said “I’m a little nervous frankly about tearing another house down, hoping we get a structure,” noting that Eitel failed to build a promised structure after getting approval for a tear-down in 2015. At today’s meeting Kovac supported the project on the promise from Eitel that he was following through on this version.

The commission unanimously approved the Nomad plan on a motion by Blair Williams and Robert Bauman. Eitel said they would move forward on permitting for the project following a Wednesday meeting with the city. 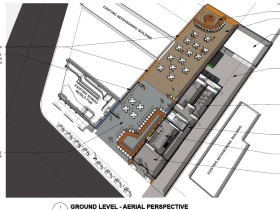 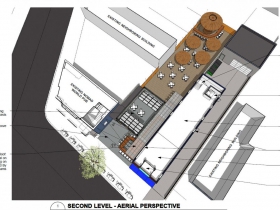 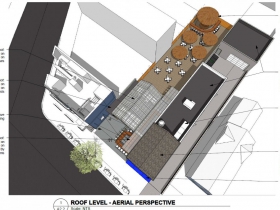 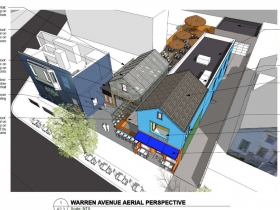 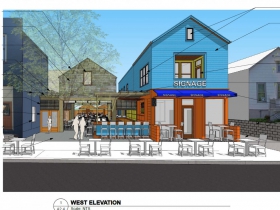 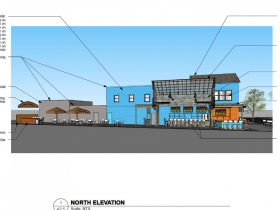 Past Expansion Plans and Bar History

We originally covered Eitel’s first plans to expand in June 2015, which would have created a four-seasons beer garden disguised as one of Milwaukee’s common housing styles, the Polish flat. That project, dubbed the Faux Flat, was approved and Eitel went forward with demolishing the two homes on the site at 1672 N. Warren St. But following demolition the plan to build was scrapped, and a more temporary better garden was erected.

The Nomad itself seems to be forever changing. It opened in 1995 as a single-story institution, part of the renaissance of Brady St., and has been evolving ever since. In 2010 the bar expanded into the second floor of the building. Eitel won approval in 2013 to build “The Nomad World Cup Pop-up Village” the following year in the Park East, but that ultimately didn’t move forward. A scaled-down version of those plans was created in 2014 when a controversial favela-inspired beer garden was built in a parking lot to the east of the bar for the World Cup. The month-long soccer tournament drew massive crowds to the bar, with 15,000 people estimated in attendance on streets surrounding the bar on June 22nd, 2014 to see the United States play Portugal on outdoor screens. The Faux Flat was approved the next year, as well as a series of events around the Women’s World Cup. And finally in the summer of 2016 the new beer garden debuted to great fanfare. 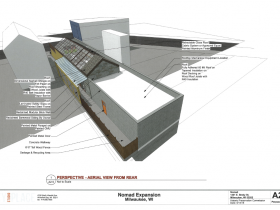 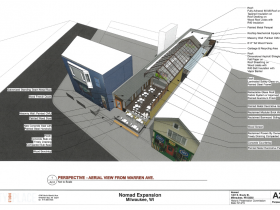 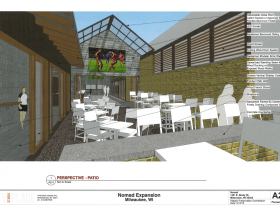 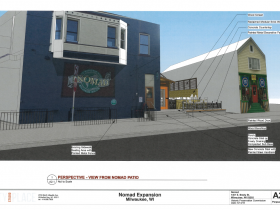 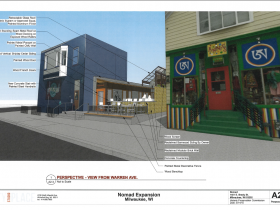 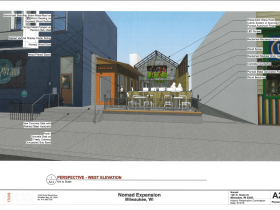 On top of the many different revisions of the Nomad expansion plans, the approval process itself became complicated with layers of oddities. Socha appeared before the Historic Preservation Commission last month to seek approval for one set of plans, but introduced a substitute shortly before the meeting to include an additional property to the south at 1668 N. Warren Ave. Eitel was working to close on the purchase of that building, but the status of that transaction wasn’t known as Socha took the microphone at the meeting. Eitel wasn’t at the meeting as he was traveling to Las Vegas for a restaurant convention.

The ownership question alone would have been enough to hold the matter, but things only got more complicated from there. Only one citizen, Ken Benka, filed a letter in objection to the designs for the expansion, but as it happens, Benka was the property owner in question. And yet he wasn’t at the meeting. The confusion was substantial enough that Benka’s second letter to the commission at one point said “I do not know how to respond to this current revised proposal submitted yesterday.” Benka objected to the Nomad plan as long as he owned the building, but noted he was in the process of selling it to Eitel and would then withdraw the objection.

If the recently introduced plans coupled with murky ownership situation weren’t enough, another unusual twist arose. The property to-be-acquired, it turned out, was not in a historic district. The Nomad, at the corner of Brady and Warren, is the southern border of the district. That border expanded in 2015 when Eitel acquired and demolished the homes at 1672 N. Warren Ave., merging the two parcels. He would be doing the same with the next property south, as merging the parcels allows for certain building code advantages that substantially impact the design. The proposed acquisition and merger would also expand the historic district, but the timing and order by which the commission would gain oversight of the property was unclear. This was enough for the commission’s unofficial commissioner of common sense Blair Williams to bluntly ask why this was on the agenda in the first place. Socha acknowledged “the bind” the commission faced, but noted he was seeking the input of its members on the project’s design to accommodate the project’s tight timetable. No one raised any objections at the meeting and the matter was ultimately held until today’s meeting.

Eitel summed it up best in a one-word sentence when he described the whole series of events as “Bizarre!” in an email to the city.

The expansion will still have to be approved by the council’s Licenses Committee and there are two letters in objection from nearby residents.

Book Excerpt: The Ghost Signs of Milwaukee by Adam Levin

Back in the News: Consultants Make $5.3 Million on Foxconn by Bruce Murphy