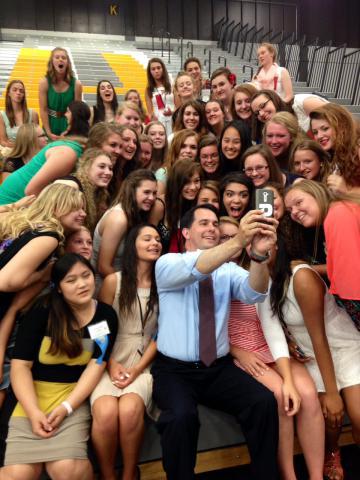 Governor Walker and delegates from Badger Girls State take a break from their inauguration in Oshkosh to take a “selfie.” Photo from the State of Wisconsin taken June 19th, 2014.

Last week the Milwaukee Journal Sentinel published a seemingly endless, six-part series entitled “Scott Walker’s Path to Power, “ written by David Umhoefer. This was a long-term project for Umhoefer, who received a 2015-2016 journalism fellowship at the Marquette University School of Communication, but it couldn’t have been an easy one.

Walker’s personality and politics, after all, were heavily covered by a flock of national journalists when he ran for president and his signal accomplishment, the passage of Act 10, received so much coverage from JS reporters Jason Stein and Patrick Marley that they turned it into a book. That may not have left much new ground to be plowed; certainly Umhoefer didn’t find much unturned soil.

The series covers eight years of Walker’s career, 2002 to 2010, but mostly regurgitates material — for thousand upon thousands of words — we already knew from news stories of that period. But there are a few things that feel fresh given what we now know about Walker:

-Walker promised in 2002 not to serve more than one full term, meaning he wouldn’t run for reelection in 2008. Obviously he was already planning his eventual run for governor, and did so in 2006 unsuccessfully, which forced him to break his promise and run for county exec in 2008, followed immediately by his winning campaign for governor in 2010.

-Walker distanced himself from negotiations with county unions, at times contradicting his own negotiators. “He understood how bargaining works but didn’t care,” said David Eisner of AFSCME. Walker was already moving toward an approach that overturns unions rather than negotiates with them.

-Yet, just a couple weeks before his 2010 election as governor, Walker told the Oshkosh Northwestern at an editorial meeting he would “negotiate” with state employees. To the end of that campaign Walker misled voters, never tipping off his plan to “drop the bomb” on unions.

Meanwhile, buried under this six-humped mountain of words is a much smaller story that could have been very powerful indeed: the contrast between county union leader Rich Abelson, the local head of AFSCME, and county exec Walker. It may have been his experience with Abelson, more than anything else, that convinced Walker unions had to go.

Abelson was a classic old school union leader who was used to intimidating county officials. “‘You’re dead! You’re gone! You’re history!’ County Supervisor Lynne DeBruin recalls Abelson telling her in one dispute, as he threatened to use union clout to unseat her in the next election,” Umhoefer writes.

But Walker was not easy to intimidate: “I’ve watched him when huge men would pound their fists on the table and threaten, and he wouldn’t even break a sweat,” Abelson told the paper.

Early on as county exec, Walker made a peace offering: he didn’t fight an AFSCME grievance which charged that former county exec Tom Ament had put some union-level jobs in management to get around hiring rules. “It was a show of good faith,” Abelson said of Walker. “He said it was sneaky, what Ament had done.”

But ultimately, neither Walker nor especially Abelson seemed interested in meeting the other halfway. Walker wanted to trim workweeks to 35 hours. “Under that plan, employees might suffer a 12% pay cut for five weeks one year. For the next year, he was considering pay cuts for up to 20 weeks.” The alternative, he made clear, “would be hundreds of layoffs — and he promised to tell workers any job losses were their union’s fault.”

That “teed off” Abelson, “who saw Walker’s layoff threat as blackmail.” So Walker “pink-slipped 280, including workers in parks, social services, corrections, custodial, security and support staff… Abelson and Walker barely spoke for the next seven years.”

As Walker’s power increased, Abelson’s gradually declined. That could have been a hell of a story, and Umhoefer does provide some contrasting biographical details, but in a cursory way. Buried in the bios is that both Abelson’s mom and Walker’s dad were influenced by the civil rights movement. Then it’s back to more regurgitation of old news. What a missed opportunity.

Along the way, the series has some oversights and distortions. We’re told “Walker was best known as a pundit on Charlie Sykes’s Sunday talk show,” but he was also featured on Mark Belling’s now defunct TV show, showing just how completely Walker captivated the conservative media. And Umhoefer suggests Walker “eagerly went after” Mercer, suing the consultant which advised the county on its infamous pension plan. In fact, Walker waited years, and repeatedly dragged his feet when it came to seeking reforms to the pension system.

Then there is the role of the Journal Sentinel in the rise of Walker. The county pension plan of 2000-2001 was passed without any coverage whatsoever by the newspaper. All a reporter would have had to ask is how much Ament would have benefited: the answer is a $2 million pension had he served until 2008 as planned. Ament was forced to resign and never collected it, but more than 255 employees received lump sum pension payment of have at least $250,000, 40 received at least $500,000 and two got more than $1 million, all in addition to a lifetime monthly pension payment. The outrage over the richest pension plan in state history, passed with no media coverage, led directly to Walker’s rise, helping elevate him all the way to governor.

It’s one thing for Umhoefer to leave that out, but he also gives readers the idea it was his newspaper that broke the pension story. Efforts to recall Ament and many county supervisors arose after the “Milwaukee Journal Sentinel began reporting on the extravagant Ament pension deal,” he writes. In fact, the story was first reported by yours truly for Milwaukeeworld.com and later in a feature for Milwaukee Magazine, which began to cause outrage among citizens, who asked the Journal Sentinel to please cover the story.

Finally, there’s the fact that the Journal Sentinel endorsed Walker in the race for governor in 2010 and again in the recall election of 2012. That undoubtedly helped swing some independent voters in both races.

The blowback from liberal readers to these editorials no doubt led to the paper’s decision just a few months after the recall to stop endorsing candidates. The paper has departed a couple times from that policy, but the truth is that the clout of its editorials — and news coverage — has declined markedly since then.

But back when the pension plan was passed the paper had tremendous clout and blew it. Both through its lack of reporting and its controversial editorials, the newspaper was a key factor in the rise of Walker. That fact — and a sprawling narrative that can never decide what’s truly important — results in an oddly hollow series that may say as much about the newspaper as it does about Scott Walker.

9 thoughts on “Murphy’s Law: The Rise of Scott Walker”