A Riot of Good Intentions

Or how a small city green space was killed by countless improvements.

It’s just a half acre, a quarter of a small city block in the Walker’s Point neighborhood where I live. The park on S. 3rd and Walker streets was a flat piece of land with some trees and benches. Old guys from the rooming house across the street hung out there during the day.  People walked through the park and rounded off the corner. It was nothing special, even a little derelict.

Then a sculpture arrived and the park was bermed in 2000. The “Stone Bracelet,” by Zoran Mojsilov, was part of the Spirit of Milwaukee Neighborhood Millennium Art Initiative based on the notion that art approved by a committee upgrades a neighborhood.

Berms are the mounded visual barriers typically found between houses and the road in the far suburbs and office parks.  In cities berms are barriers to what Jane Jacobs called “eyes on the street” —  the visual connectivity that makes parks safer and life generally more engaging in a city.

That this sculpture failed its civic duty is beyond dispute. Besides being butt ugly, the bolder-berm became a nook for muggers and drug dealers. The Spirit of Milwaukee planted a symbol of neglect that looked worse every year while the rest of the park went to seed.

I erased it photographically in a 2000 Milwaukee Magazine feature to demonstrate how much better the park looked without it.  The “art” deflates the space, stands in the way of something larger. It’s called negative space in art, which brings clarity to compositions and strengthens the relationships between existing elements. That’s the pleasure of pocket parks, how the city frames them and vice-versa.

People still used the park because space is a scarce resource in a dense urban neighborhood.  Russell, a guy from the neighborhood, meandered across the street to his bench on a nice day.  Sometimes there would be a couple talking in the park.

Recently more “improvements,” equally questionable, were made. The sculpture is now incorporated into a new project called Paliafito Eco-Arts Park. There’s a new 60-foot, almond-shaped, terraced vegetable garden. It’s part of an urban agriculture program. The kids from the nearby school planted it in the spring but were not around for the harvest.

The next stage of development includes a “decorative rain water harvesting system” connected to a walkable river, and an amphitheater.  And, of course, there will be compost bins.

According to Arts @ Large, a nonprofit around the corner that runs after school programs for kids in “eco-literacy and art”, the new park will reduce flooding of basements in the neighborhood, “engage the stakeholders in water related educational programing,” provide artistic opportunities for the stakeholders, and integrate science, technology, engineering, art, and mathematics.

With all these potential benefits Arts @ Large lined up local businesses, funders, and got schools to buy in. This generated more funding and “stakeholders.”  It’s quite a lineup. The park is a road map to just about every foundation that supports the arts or the environment in Milwaukee.

What’s not to like?  The community is pulling itself up by it’s bootstraps toward a culturally rich and ecologically sustainable future.

That’s a great story.  But I don’t know who Barrett is talking about.

No one uses the park anymore. I mean, literally not a soul. It’s tragic.

I didn’t believe it at first, so I walked my dog by the park at least twice a day all summer long and took pictures. During that entire time I found just two lone figures in the park, both of whom used to live in Walker’s Point and came to see what the old neighborhood was like. In the picture below a young girl seemed a little lost sitting on rock looking at her cell phone. She came up from Racine on her day off.  And an older woman who didn’t want her picture taken told me, “The park used to be a lot friendlier.” 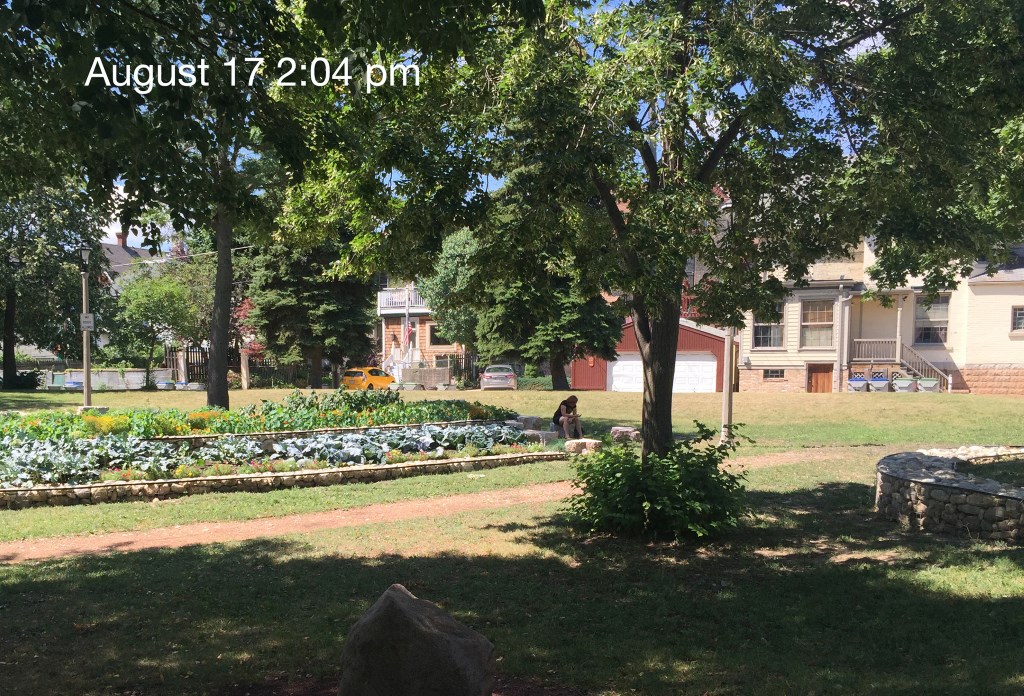 I interviewed the mail carriers for the area and people who live by the park.  All of whom noted the alternations to park created a dead zone. Some homeowners are glad to get rid of the riffraff.  Others feel like they lost their front yard. Russell died shortly after his bench was taken away.

This is a surprising and counter intuitive result. Urbanists often observe that public spaces are incredibly resilient.  Kids will play in a pile of mud.  Usually you have to fence vacant lot to keep people out. But Paliafito Park is empty and unused.  People won’t even cross the perimeter, almost as if it’s someone else’s front yard. There’s a force field around the place.

Why doesn’t anyone go to Paliafito Eco-Arts Park?  The simple answer is all the good intentions filled the park to the brim. There is no space left that draws you in.

Let’s start with the new addition to the park. The raised beds are made of gabion baskets, a takeoff of an erosion-control device by a local artist that has become a eco-branding motif for Walker’s Point. You can also find them at MC2 Park, a small triangle formed when South Water Street bends toward the river at Seeboth Street. These caged rocks make sense and function better in mass on the side of mountains in Japan than they do as an eco-artifact in Walker’s point. Made of plastic, chicken wire, and the rocks, the cages are a hazard to climb over to get at the vegetables. You can’t sit on them either.

Plunked right in the middle of the park, the raised bed is a cognitive obstacle,  something you walk around rather than by.  It’s totally out of register with its context. 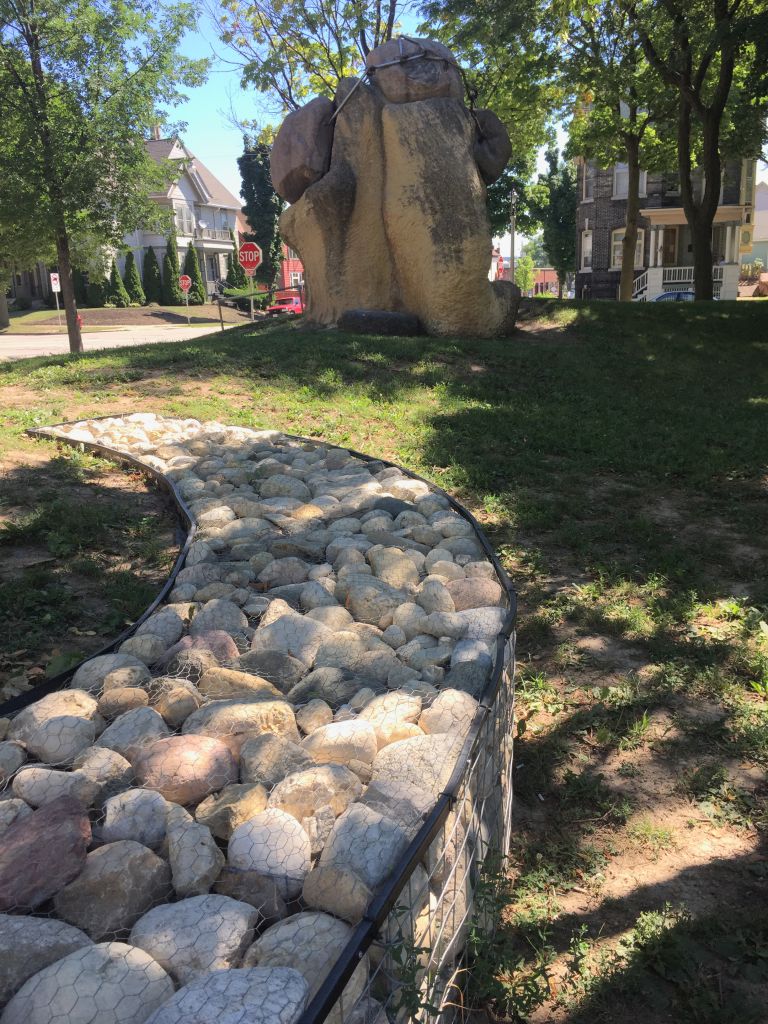 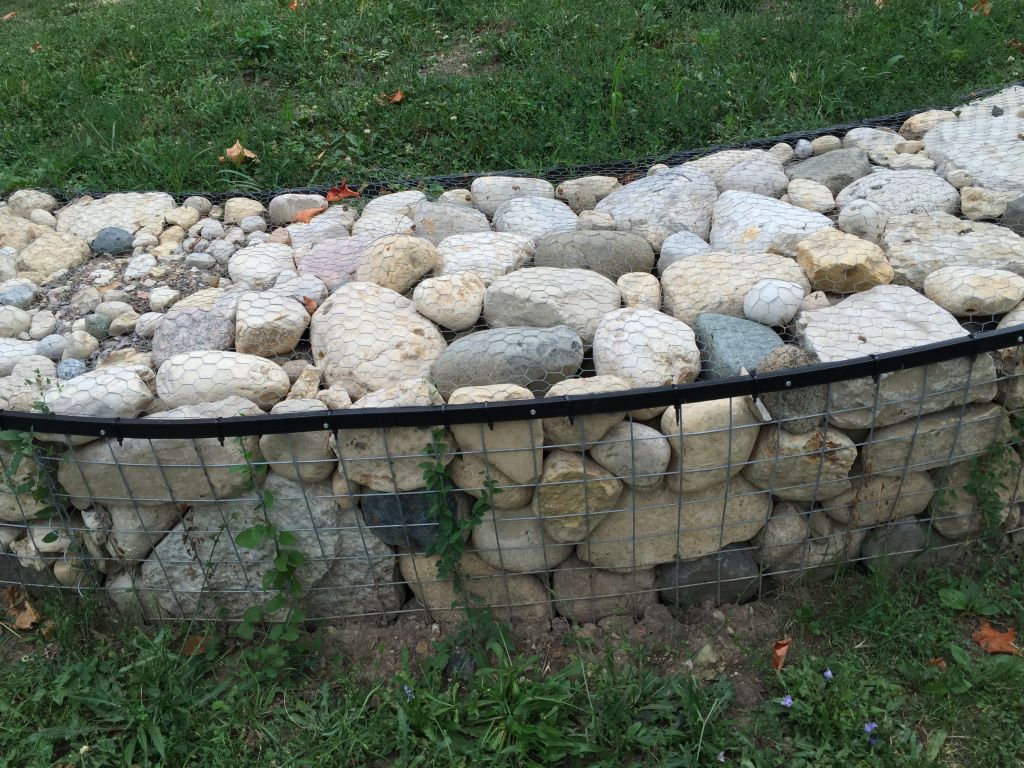 Who put it in the middle of a tiny park?  Sean Kiebzak, director of programs at Art @ Large and the manager of the project told me me in an email, “Our partners (City of Milwaukee, Reflo, Century Landscaping, Arts @ Large) collectively agreed on the placement as it is relative to the overall plans for the re-imagining of the park.”

I tried to get Kiebzak tell me if someone drove the process.  A designer perhaps, who would respond to the site and the community, and then produce several schemes to get the conversation going?  Kiebzak  suggested I talk to Justin Hegarty, a water engineer who is the part-time director of Reflow, who did the “conceptual drawings” for the project.  Hegarty told me there was also an intern involved who worked with Ursula Twombly of Continuum Architects and Planners.  The terraced vegetable garden was provided by John Klatt of Century Landscaping, who according to his website does patios in the suburbs. 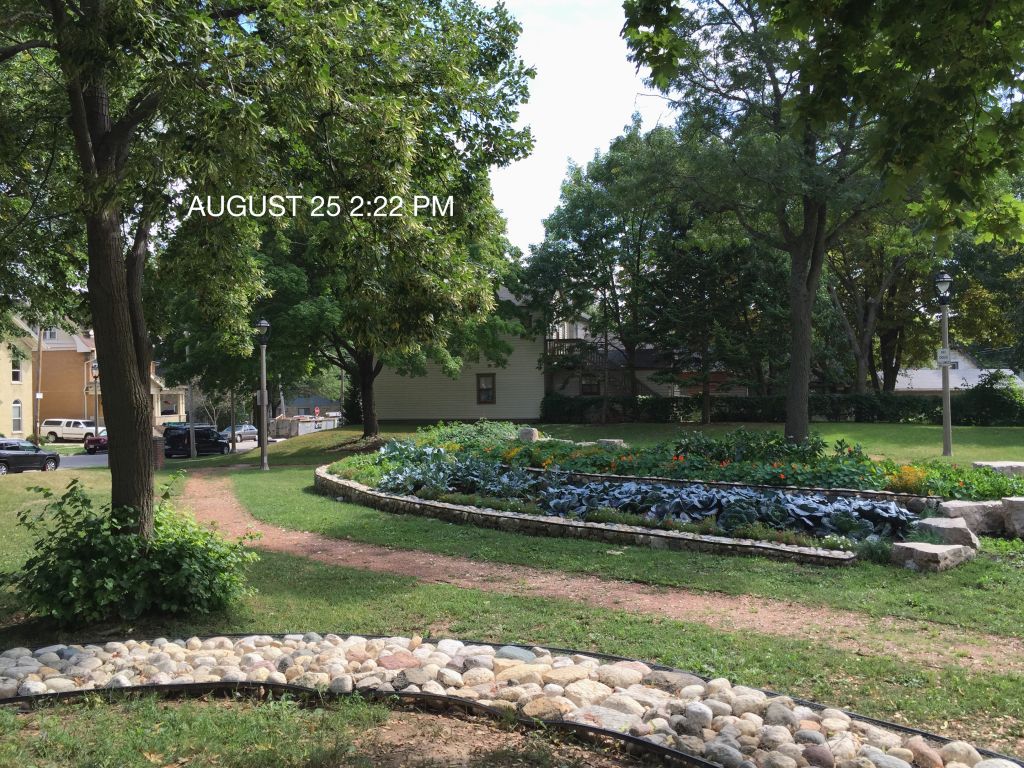 Kiebzak said they surveyed the residents, though he couldn’t find one to show me.  Perhaps for good reason.  According to Hegarty the only thing he could remember from the survey was more than 90 percent of the respondents hated the “Stone Bracelet” sculpture and wanted it removed.  But the Milwaukee Arts Board vetoed that idea and told Hegarty and company not to mess with the context of the sculpture, the berm.

So an art park that’s supposed to serve the community starts out with a domineering sculpture the neighborhood hates.  Rather than getting rid of something wrong, the impulse to make a place better usually takes the form of adding something new.

It seems like a classic case of too many cooks stirring the broth. An ad hoc committee of stakeholders gather around an empty pot without a recipe for chili. What do you put into it?  The city has left over beans (the sculpture) from another failed project. The landscape partner, a friend of the organizing institution, brings the wrong kind of tomatoes.  Another partner adds too much salt.

Don’t forget that a “walkable river,” amphitheater, composts bins and “decorative rain water harvesting system” are going to be added on this tiny spot of land.  They are still raising money for the project.  Arts @ Large may need shelves in the park if someone else comes up another fundable idea.

Existential pleasures like watching the day go by have been displaced by demonstrations of green technology, art, slow food, and the like. Instead of finding your place in it, there’s a lesson plan. Paliafito Eco-Arts Park is as busy as its name, programmed like a classroom instead of a lounge.

In this funding-driven model things just happened, the more the merrier.  Obviously they should have started with the space and worked backward. Done what park designers have done for more than a century.  Space is the place in cities.

A band of community organizations cannot design a park with no one overseeing the project. The process floundered without someone in charge with the expertise and authority to make the park into a coherent whole.

What happened to this park could never have happened on the East Side or in any neighborhood of middle-class residents. All the non-profits here may have been living up to their organizational missions, but together  operated as a kind of colonizing force that took over the space, never mind what neighbors might think. For Ald. Jose Perez, who told me he felt the park needed some kind of improvement, the assemblage of so many well-meaning non-profits seemed a guarantee the results would be good.

The irony is that Walker’s Point is on the upswing and a small green space like this could be wonderful and would have succeeded all by itself. All that was needed was to eliminate the berm and the bad art.

I don’t know how many pocket parks like this the city owns (all the major parks are run by the county), but they can be hugely important, typically making neighborhoods better and driving up property values.

Projects like this are what grows in a vacuum. The city treated the park like a vacant lot and signed a 25-year lease with Solutions in the Land, a partner of Art@Large. There was no meaningful design review process, no checks and balances for a public park like there are for new apartment buildings.

The city needs to exert some authority and discipline over its parks and any “improvements” to balance the stakeholders and public interest. Without such a structure there will be more green spaces that become too busy and bossed about to leave any room for the people.

24 thoughts on “In Public: A Riot of Good Intentions”