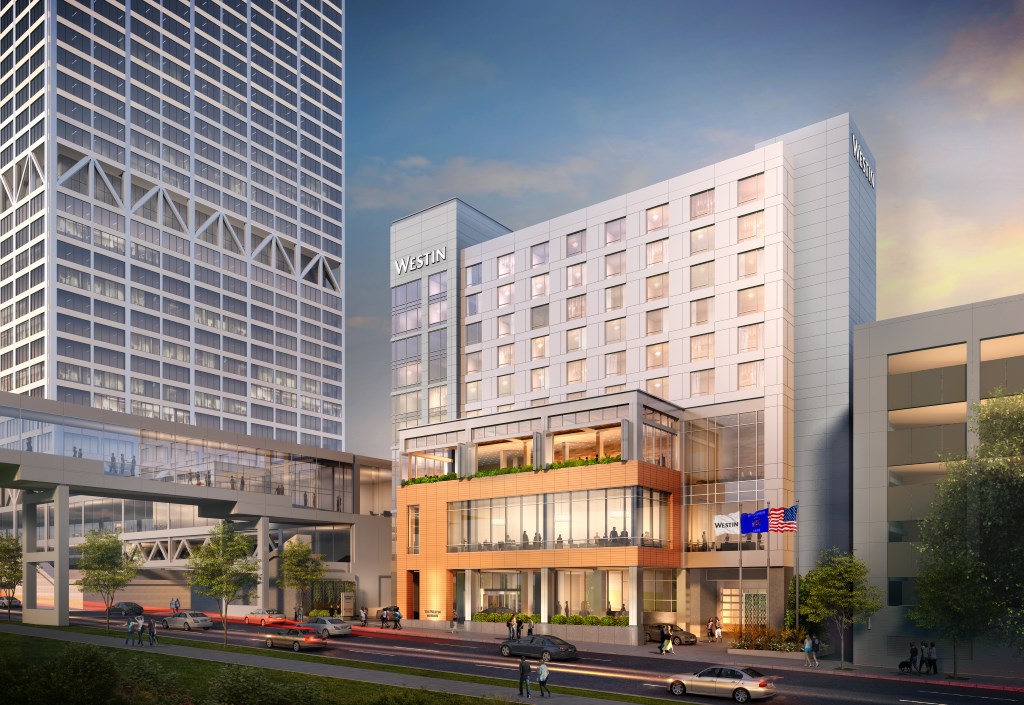 The new Westin hotel, which is set to open next summer in downtown Milwaukee, has announced plans to include an Italian-themed steakhouse on the ground floor level. Located at 550 N. Van Buren St., the new 10-story hotel will have 220 rooms, plenty of meeting space, a 5,000-square-foot ballroom, and now, a modern Italian steakhouse. Corrinne Hess of BizTimes has more to say about the unnamed restaurant:

White Lodging, which will manage the hotel for developer Jackson Street Holdings, is working with Chicago-based Lettuce Entertain You Enterprises, Inc. on the project, which will feature pastas prepared fresh daily, Italian specialties with an “elevated twist,” and steaks, said Jeffrey Hess, general manager of the Marriott Milwaukee Downtown hotel (also developed by Jackson Street Holdings). Hess will transition to general manager of the Westin Milwaukee hotel when it opens.

Rare and the restaurant at the Westin bring two high-end restaurants to a block that previously had none.

Soup and sandwiches go hand in hand. That’s why Richard Regner, owner of Soup Bros. (212 W. Florida St.), is hoping to open up his own sandwich shop this winter. The Philly Way formerly occupied the neighboring space, but closed this past summer after the building’s new owner increased rent significantly. BizTimes’ Hess details the developments:

Regner, who graduated from the Culinary Institute of America and worked in several restaurants in New York before coming back to Milwaukee, said he is hoping to bring back the manager of Philly Way to run the sandwich shop. And he does plan on serving cheese steaks.

He also plans on serving a variety of other sandwiches, and taking a “sous-vide” approach to his meat, a method of cooking in which food is sealed in an airtight plastic bag and placed in either water or a temperature-controlled environment for longer cooking times to ensure it is evenly, but not overly cooked.

While Soup Bros. is typically open until about 3 p.m. daily, Regner plans on having the sandwich shop open until 7 p.m. for people who want to grab a bite to eat before a show. Caroline’s would like to use the parking lot in the evenings for the Jazz Club, he said.

As far as the increased rents, it did happen, but it has been worth it because of improvements made to the building by the new ownership, Regner said.

“I could have picked up and moved, or I could have continued here and that’s what I decided to do,” Regner said. “I’ve been really pleased with the new ownership. They’ve been fixing up the place in a way that has never been done.”

After 10 months of remodeling, John Dye, owner of Bryant’s Cocktail Lounge, is set to unveil his second project on Thursday, Nov. 3, reopening The Jazz Estate (2423 N. Murray Ave.). After purchasing the business in 2015, Dye set out to preserve its long history. New aesthetics will give the place a fresh yet vintage feel. Molly Snyder of OnMilwaukee was able to get a sneak peek inside the newly refurbished lounge:

Updates include a new tin ceiling, which is a foot higher than the old one, and appears to be antique but is actually a brand new acoustic ceiling that absorbs sound. The cash register is also new but looks antique.

The Jazz Estate’s cocktails are named after the paint colors and wallpaper: Earthly Delight, Cassidy’s Roundup, Uptown Funk and Heart Leaf. There are 12 new cocktails on the menu and 30 different bottles of beer.

The Jazz Estate will have live music every Thursday and Saturday night, with record spins and pre-recorded old school soul and jazz on the other nights.

“The Jazz Estate is designed for night time – it’s dark and sparkly with great drinks and sounds,” says Dye.

The now vacant Catch 22 Bar & Grill (770-772 N. Milwaukee St.) in downtown Milwaukee could be turning into a high-end gentleman’s club (that would be a strip club) and restaurant soon. The Cosmopolitan would feature a Roaring ‘20s theme after $1 million of renovations are invested into the building. The business plan states the second story of the building would be exclusively for adult entertainment, while the main floor would have a full bar. A strict dress code is expected if plans move forward. But that’s far from assured as city officials have in the past opposed a downtown strip club. Melanie Lawder of the Milwaukee Business Journal adds more on the project:

According to the business plan, the high-end club will be targeted to a more upscale clientele and business professionals and is described in the plan as a place where “beautiful women in evening gowns will illuminate the space and provide a tasteful gentlemen’s club experience to our guests.”

In February, the two-story, Catch 22 building sold for $922,500 to the owner of the popular Indian dining spot Maharaja on the Milwaukee’s east side. At the time the owners purchased the building with intent of renting it out to another restaurant or bar operator. Catch 22 closed at the end of 2015.

Onyx nightclub, found at 3120 W. Villard Ave., voluntarily surrendered its liquor and entertainment licenses on Monday. Common Council President Ashanti Hamilton asked the operators of the Onyx Social Club & Restaurant to hand over all liquor and entertainment licenses after some troubling incidents over the years. A press release announced the closing, and cited the multiple shootings at or near the club, along with frequent neighborhood complaints by surrounding residents, as the reasons behind the closing.