By Tamarine Cornelius, Wisconsin Budget Project - Oct 6th, 2016 10:23 am
Get a daily rundown of the top stories on Urban Milwaukee

Republicans who control the U.S. House of Representatives have proposed a budget framework that would raise the incomes of millionaires while cutting services for families and individuals with low and moderate incomes. The leader of the House of Representatives, Paul Ryan, represents a Wisconsin district that includes the cities of Kenosha, Racine, and Janesville.

The budget framework, called A Better Way, includes an emphasis on cutting taxes for people with very high incomes. According to an analysis by the Urban-Brookings Tax Policy Center, the GOP House tax plan would: 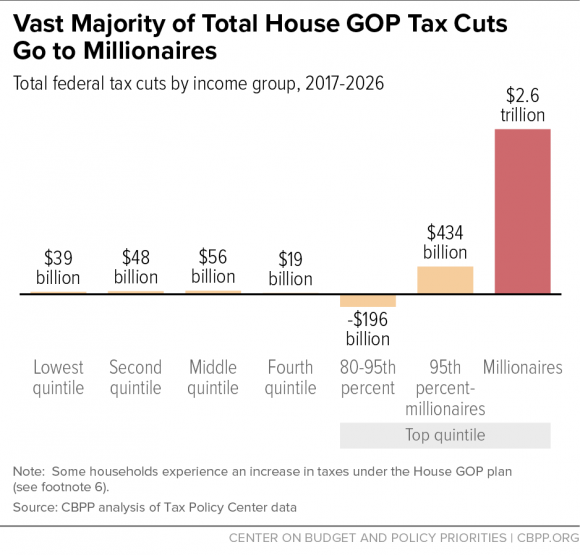 In addition to enormous tax cuts for people with very high incomes, the GOP budget framework includes plans to cut programs for people with low- and moderate-income people by $3.7 trillion, or about 40 times the estimated $87 billion in tax cuts for the bottom two fifths of the population that the House GOP tax plan would provide. The framework doesn’t include information about which specific programs would be cut, nor does it address ­­the deficits caused by the tax cuts in the plan.

The Center and Budget and Policy Priorities sums up the potential effect of the framework this way:

“In short, most households would be significant net losers under these budget and tax policies. At a time when many Americans believe income inequality has grown unacceptably large, the House GOP budget and tax framework would further widen this divide significantly.”

For more information about the tax effects of the House GOP budget plan, see “House GOP Framework Would Give Millionaires $2.6 Trillion in Tax Cuts, While Cutting Programs for Low- and Moderate-Income People by $3.7 Trillion,” by the Center on Budget and Policy Priorities.