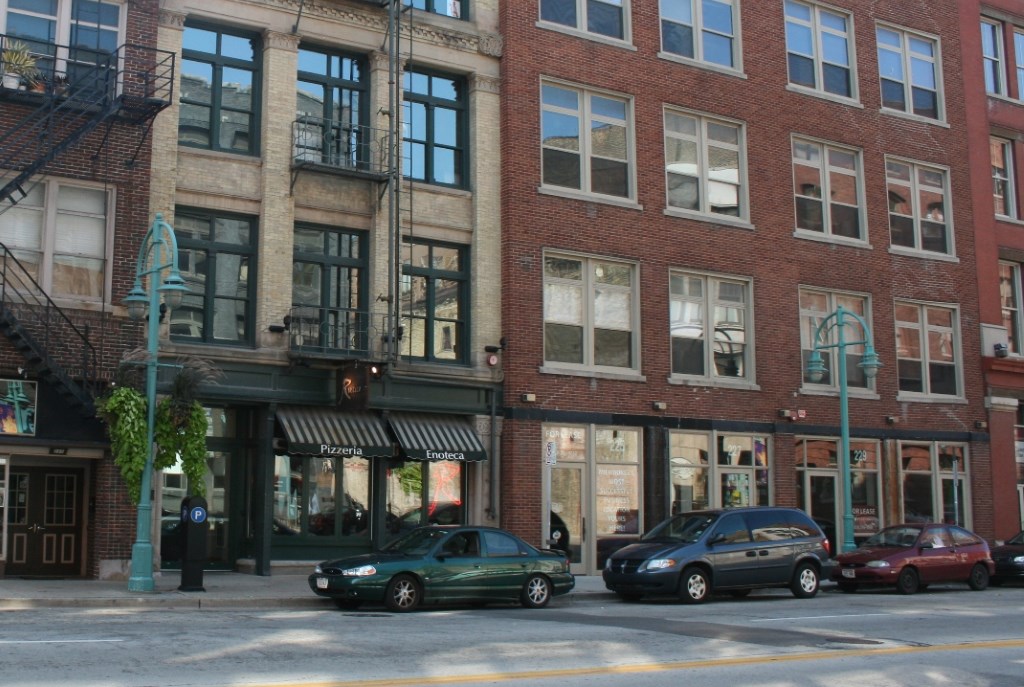 Rivalry is set to open at 223 N. Water St., the former location of Rustico. Photo by Jeramey Jannene.

A new sports bar and restaurant is coming to 223 N. Water St. in the Third Ward. Rivalry is set to open on Oct. 20, which is when the Packers play the Bears on Thursday Night Football. Joshua Janis will operate the new two-level sports bar. He hopes customers of opposing teams will develop a friendly rivalry with each other to create a fun, energetic atmosphere. Lori Fredrich of OnMilwaukee has more details:

When it comes to food and beverage, Janis says Rivalry will focus on a limited number of menu items done very well.

The menu – which was created by Chef Brad Clark, most recently of Saloon on Calhoun – is being tweaked, but Janis says appetizers will include items like wings and hand-breaded cheese curds. Main dishes will include casual fare like pizza and burgers – with a twist. In fact, it seems the food items will be in a bit of a rivalry of their own.

There will be two styles of pizza: Chicago deep dish and hand-tossed. An Italian beef sandwich will sit juxtaposed against a pot roast sandwich. And a Wisconsin bratwurst will vie for attention alongside a Chicago-style hot dog.

As for beverages, Janis says they’ll shoot high there, as well.

“We’ll be less of a beer place than a cocktail place,” notes Janis, who says there will be about six tap beers. “The menu will be simple, but it will feature a nice selection of high quality cocktails and a focus on the old fashioned.”

After Colectivo terminated its contract with SSP America at General Mitchell International Airport, a new coffee shop is ready to step up. Valentine Coffee will take over three kiosk locations in the airport, one on Concourse C and Councourse D, respectfully, and one in the concessions mall. Fredrich has more about the change:

All of us at Valentine Coffee are excited to bring our brand to three new locations at our hometown Airport,” says Joe Gilsdorf, co-owner of Valentine Coffee. “We are very proud of our coffee, and our new licensing partnership with SSP America is a great opportunity to introduce our local product to more people from throughout Wisconsin, northern Illinois and beyond.”

And the excitement appears to be mutual.

“Valentine Coffee Roasters is one of Milwaukee’s hottest coffee roasters becoming a critical part of the daily coffee ritual for locals,” notes Paul Loupakos, Vice President of Business Development. “SSP America is excited to offer that same small batch, bright and balanced coffee to the passengers of MKE.

The Phoenix Cocktail Club is expected to open as soon as mid-October at 785 N. Jefferson St. in Milwaukee. Owners Ryan Bonen and Bob King say the new space will start out serving cocktails, but small plate offerings will become available soon. The Greek townhouse-style building was constructed in 1858 (known as the William A. Webber House). Fredrich highlights the cocktail menu:

The Phoenix Cocktail Club’s ambitious collection of cocktail offerings will be overseen by beverage director Adam Sarkis, who most recently steered the beverage program at Braise Restaurant in Walker’s Point along with longtime time bartender and national cocktail consultant Joey Houghtaling.

The menu, which will be broken up into categories including Colors, Slushies and Mood Inspired cocktails, a concept galvanized by the Futurist Cocktail Movement, which gained traction in the 1930s.

“Futurist artists were working in bars,” notes Sarkis. “And they started taking their ideas in art and applying them to cocktails. They were all about the element of surprise. For instance, they had a tendency to garnish their drinks with unusual ingredients. Most of the moods incited were libido-based.”

Mood drinks like War in Bed will sit alongside classic cocktails and modern riffs influenced by places like New Orleans and Cuba.

“The goal is to make this a great cocktail bar that’s innovative, exciting and classy,” says Sarkis.

With Brady Street in Milwaukee changing more and more, Qdoba is aiming to change the landscape of one of the city’s more well recognized streets. The chain is building a new, two-story restaurant on an open lot found at 1348 E. Brady St. after closing their Lower East Side location at 2228 N. Prospect Ave. Jeramey Jannene of Urban Milwaukee gives more insight:

The design of the building was approved by the Historic Preservation Commission on March 14th, 2016. The building was required to obtain special design approval because of its location within the Brady Street Historic District. The restaurant is being designed and constructed by Waukesha-based The Redmond Company.

Customers will find a partial upper level complete with 12-seat balcony and 32-seat mezzanine area. The rear of the second level will be open to the first floor. The first floor will include 40 seats, as well as restrooms, the kitchen and other service areas.

A two-story building formerly occupied the site, but was demolished in the early 1990’s. The site has been most recently used by vendors during large Brady St. events, and as a cut-through for employees of the adjacent Jimmy John’s restaurant.

The inaugural Rev-Up MKE small business competition, operated by Near West Side Partners, recently came to a close. The winner was Pete’s Pops, a start-up business that focusing on selling fresh fruit and cream popsicles, commonly known as paletas. The competition’s press release speaks about the competition in more detail:

Pete’s Pops will now join the ranks of some of the world’s greatest start-ups located in the Near West Side – startups that are now recognized iconic brands like Harley-Davidson and MillerCoors,” said Keith Stanley, Executive Director of NWSP. “We’re excited Pete Cooney will bring more than just unique flavored popsicles to area residents and employees in our neighborhood of neighborhoods.

Pete’s Pops will receive significant resources to support his venture, which will be located in a Near West Side storefront, including:

One thought on “Now Serving: Downtown Gets Two New Bars”