As falls begins, folks at the Victory Garden Initiative in Milwaukee are doing what they love to do—grow food.

“I would say throughout my whole adult life one of my favorite things has been growing food,” Mead says. “Whether it’s preparing it or serving it to other people. It’s especially gratifying when I’ve grown it myself. It helps make my home a dynamic and loving place.”

And that’s essentially what they do at Concordia Gardens. The mission of the garden is to create a community based, sociologically just and economically sustainable and nutritious food system.

Mead and the garden change conversations about what’s going on in Milwaukee. On an acre-and a half of land, Mead, along with other members and fellow gardeners, have been growing food for eight years at 220 East Concordia, two blocks west of Fulton in the Harambee neighborhood. She says they have a diverse but steady revenue stream for the gardens. Half of the production on the land is vegetable production in some form. 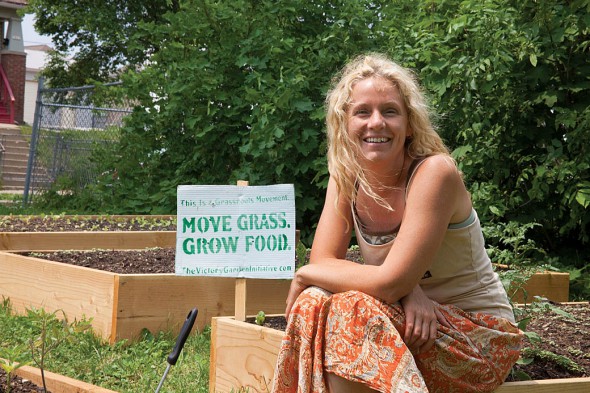 “Collectively, we’re producing thousands of tomatoes each year, as well as hundreds of pounds of collard, chard.”

With 500 individual gardens, water is obviously a big component of what they do. They have a vested interest in water quality and sustainability. Where that water comes from isn’t always a foregone conclusion.

“We have a permit for use of the fire hydrants,” Mead says. But that wasn’t always the case. A few years ago the city wanted to cut off the use of hydrants as a source for watering gardens.

Some communities, like Wauwatosa, pay $3,000 a year to water 300 plots on seven acres of land. Residents in this area just don’t have that kind of money. Some victory gardens have water spigots for farmers to tap into. Again, that’s not happening here. If it weren’t for they hydrants and rainfall, Mead says she doesn’t know what they would do.

“We have an underground cistern,” she says. There’s a natural slope that helps collect the water, but it did require some reshaping by human hands.

“It was a bit of both,” Mead says. “Water used to run off into the sewer. When we put in the cistern there was one natural low spot and we are able to capture about 2,500 gallons each rainfall. All the water we collected is for our crops,” Mead says. “The gravity pushes water out to a bilge pump. MSOE students devised a system that helps us with our situation.”

Another way Mead has enhanced the green infrastructure at the garden is with their production of fresh soil for gardening.

“We collect compost from local grocers and brewers,” Mead says. “We utilize the city of Milwaukee’s woodchips as they cut down trees to create more soil. The cisterns don’t fill up as much as it once did, but that’s okay. The rain is now falling onto our topsoil.”

Mead says she sees the excitement and sense of fulfillment in those who work the garden. “It’s a great gift to see the smiles on their faces when they harvest their first tomato. It’s very empowering and brings joy to people’s lives. It’s about more than raising vegetables,” Mead says. “Our gardens have become positive gathering spaces in the neighborhood and help with crime prevention. When I see the garden, it’s an amazing extension of the same feelings. It might not be my home but people are still gathering, growing food, sharing food.”

She says there’s something intrinsic within our being that recognizes these processes. Something ingrained in the DNA of our species.

“We put ourselves outside of our own lives,” Mead says. “It’s inescapable.

She says the perfect example is the leafcutter ant. 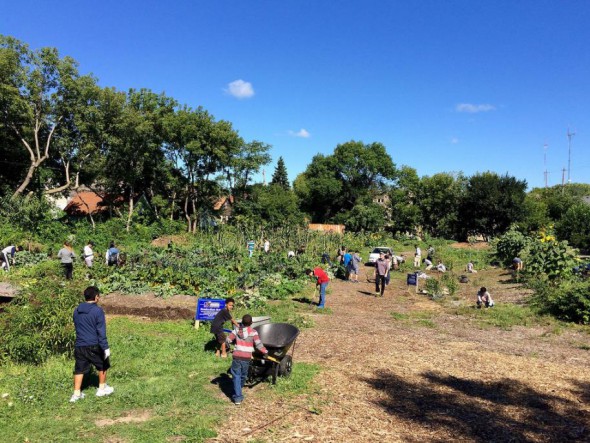 “It has an incredible way of gardening a tree. He hangs out by the tree, fosters its development, then the ant eats the tree.”

Sounds like the perfect cycle of life.  Is participation in the garden growing?

“Kids learn by word of mouth on the street on a regular basis,” Mead says. “We do some outreach but ultimately word on street is our most fruitful recruitment tool.” Mead says a number of key kids working with her for a number of years that have become leaders. Made it fun for other kids.

“You have to remember a lot of these kids are looking for something to do and our garden allows them to hang out with other kids in a productive and safe environment.”

Mead explains they try to imbue the kids with their mission, but she says she isn’t sure it’s always getting through.

“We can tell the kids about our mission, but the reality is, children love playing with water. If they are considering a mindset of water conservation, we might be able teach them.

But for now, they want to play with the rain barrel, watch how the water flows.”

Mead says the garden is an example of something she always thought Milwaukee could and should do. It’s about people becoming part of their own landscape and growing their own food in their own space.

“I saw what the food pantries were doing and I increasingly responded to it.”

With the garden’s commitment to the community and sustainable water resources, it’s a victory for both. 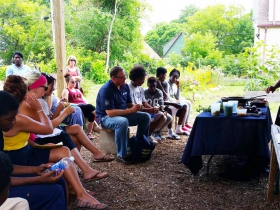 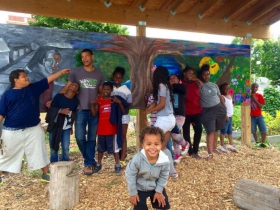 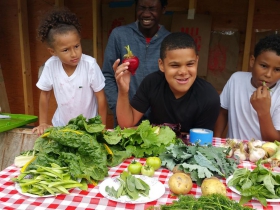