For some people, like Nathan Guequierre, a calling might come later in life, requiring a total switching of gears at a point where you should be enjoying autopilot with your career.

“Urban planning is a second career for me,” says Guequierre. “I think a lot of people are drawn to the field because they want to have an impact on the place they live.”

Guequierre is senior planner with AECOM, an international, Fortune 500 global firm that provides engineering, architecture and services to public and private clients across a wide spectrum. Guequierre and his company was paid by the Milwaukee Metropolitan Sewerage District to help implement a green project undertaken by the City of St. Francis.

The city, AECOM and local volunteers worked together on the St. Francis Green Summer effort, which installed enough green infrastructures to capture more than 8,500 gallons of water every time it rains. Their work has now been recognized by MMSD, which announced its October Green Luminary award would go collectively to all involved in the project. The MMSD has in the past given the award to businesses, non-profits and others involved in efforts to conserve and restore Wisconsin’s water supply.

Guequierre says he enjoyed working with the people in St. Francis.

“They were an awesome help and it illustrates our partnerships between municipalities.” AECOM does a lot of green infrastructure design for municipalities and builds rain gardens, bioswales, water and water reclamation facilities. “For me, everything is built around public involvement,” Guequierre says. “That’s our centerpiece.”

This project aligned with that, with its ambitious goal for capturing 720 million gallons of rainwater during every storm.

“Every residence would have to have a rain barrel for that to happen,” Guequierre says. “While we’re pursuing that we have to figure out how to build a constituency. Every drop of water that falls on your property, almost all of it ends up in the Milwaukee River, and then Lake Michigan. I’d say 80 percent of the population doesn’t know about what we’re doing, but the message is getting out there.”

He says in his industry, it’s all about capitalizing on relationships with people that share these environmental values and creating new ones.

Guequierre says his calling to the industry came after MMSD had completed the deep tunnel project. “They (MMSD) spent a lot of money on public involvement in watershed planning, the whole water cycle–an enormous amount of money.”

That was a lightbulb-moment for Guequierre. “I really saw how important water is to people. Here in Milwaukee on Lake Michigan, we learned we have a much higher requirement than the law demands. Milwaukee had a higher expectation.”

Guequierre has also overseen projects in Brown Deer and West Allis. “I do a lot of nonscientific research,” he says. “What kind of language do we use with people. The understanding is far deeper than I guessed.”

He reminds people how storm water is directly linked to water pollution and water quality. “Of all the projects we do, this is the most fun, 100-percent positive.”

AECOM distributed 150 rain barrels in St. Francis. He says residents went essentially from not knowing anything about combating water pollution to becoming local champions and telling neighbors about it.

“I would love to go back to St. Francis or Brown Deer and reassess the success,” Guequierre says. “Did we get the low-hanging fruit? Did we get people who were already interested and motivated?”

He says the first part of his effort is asking people why they’re interested in participating.  “Across the region, the number one answer is they love that it’s free. They just consent to letting us put in the rain barrels. ‘Come and install it,’ they say.”

“Some do it for altruistic reasons,” he continues. “They want to do a little bit to improve environmental health. Beautify the property. The third reason is to save money.”

Guequierre met a resident, a Vietnam veteran, who had four rain barrels on his property.

“He asked us to come look at his basement,” Guequierre says. “He had 400 gallons of rainwater stored. The man has a gorgeous garden and hasn’t paid to water it in 25 years. That’s a success story.” 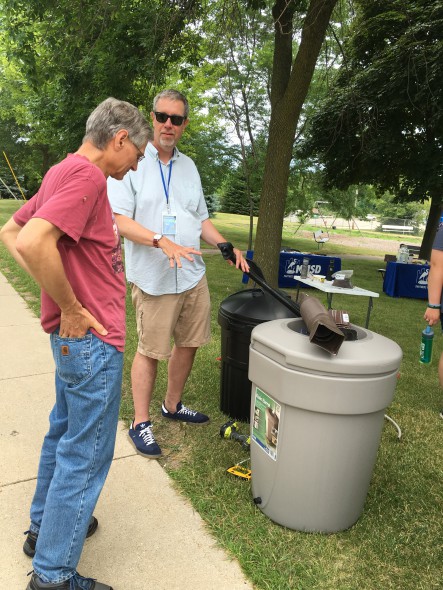 Guequierre says he’s found there’s quite a bit of latent demand for rain barrels and interest in other green approaches.

“Unfortunately, when you have a crisis, like flooding, it raises people’s awareness. In Kewaunee County, 40 percent of their drinking water from the wells is contaminated. They have the highest concentration of large factory farm run off. Nobody can drink their water and nobody knows how to regulate it.”

“Each time I drive by Lake Michigan I think about how it’s our biggest asset. The way we define what Milwaukee is. It seems so big, but I think it’s more sensitive than we realize. A finite resource.”

Guequierre praises the Sisters of St. Francis, whose convent is located on Lake Dr. in St. Francis and are very dedicated to conserving water. “They have a great awareness of impact on the environment. The sisters have a green team of their own.” (The group’s website credits the example of their founder, St. Francis of Assisi, who valued natural resources like water.)

Their rain garden will capture 450 gallons per rain event. They also have rain barrels.

“With the barrels, they see value in collecting rain water rather than watch it run into the street,” Guequierre says. “This is a network of people who understand we need to capture water where it falls.”