As it does each month, the Milwaukee Metropolitan Sewerage District has recognized efforts by metro-area groups to discover and maintain ways to reduce water pollution.

The recipient of MMSD’s Green Luminary Award for the month of August is the Friends of the Monarch Trail, a group based in Wauwatosa. In a bit of contrast to previous award recipients, the efforts made by this organization benefit not only the physical landscape, but also the perpetuation of Monarch butterflies in the metro area.

Barb Agnew, founder of the group, says they are restoring butterfly habitats where they once flourished.

“We’re putting back the pieces so we can have migration again,” Agnew says. Through the years, Agnew has watched hundreds of thousands of Monarchs that each September come through an area located between Watertown Plank Road and Swan Boulevard. 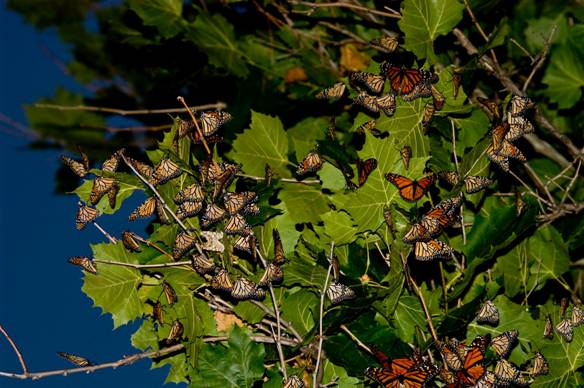 The Monarch population is in crisis mode, according to Agnew. Consequently, the group is active in making changes now.  “During the past 20 years, we have lost millions of acres of their breeding grounds throughout the U.S.,” Agnew says.

The U.S. Fish and Wildlife Service has given the federal government until 2019 to decide whether the monarch butterfly will receive Endangered Species Act protection. Some, like Agnew, aren’t sure that will come in time to save the species.

Historically, there have been two roosting sites for the Monarchs in the area.

“At one time this area was like a five-star hotel for butterflies. The whole 250 acres supported the migration,” Agnew says. “They knew it provided food, protection and food to fuel up.”

How much concern does Agnew have for the plight of the species?

“It’s complicated,” Agnew says. “Overall numbers are down. The remaining areas have not been put back into supportive habitat yet. If we don’t put right plants in place, we won’t ever have big migrations.”

Projects by her group that help the butterflies also help reduce flooding and water pollution.

“Right now we have newly constructed drainage swales and a stream, all of which will eventually find their way to the Milwaukee River,” Agnew says. A grassed swale is a graded and engineered landscape feature appearing as a linear, shallow, open channel with trapezoidal or parabolic shape. The swale is vegetated with flood tolerant, erosion resistant plants.

The Wisconsin Department of Transportation owns a good chunk of land in the migration area and Agnew says they have been very responsive to her concerns.

“We worked very closely with them,” she says. “Worked intensely to improve the right of way for the zoo interchange where they added milkweed and nectar sources for the Monarchs. Not only have they been responsive, they’ve given us permission to improve this section that contains wetlands. We have our link in the chain.”

Butterflies play a large role in pollination, Agnew says, although not as large as bees, hummingbirds and wasps. 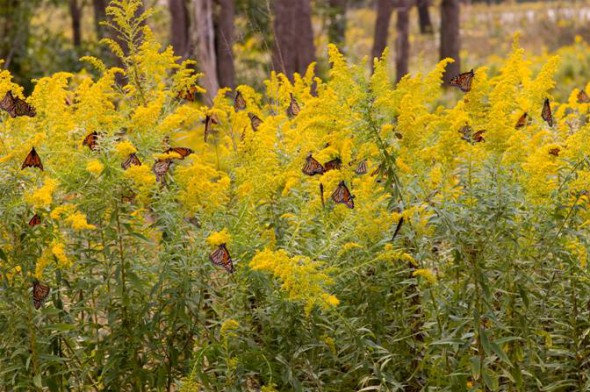 “They have varying levels of ability and effectiveness,” Agnew says of the butterflies. “Not as well suited for pollenating certain things as bees are.”

Agnew says her organization doesn’t work with rain barrels, unlike many of the Green Luminary Award winners. Most of their efforts concern the landscape.

“We’ll be able to improve the water quality. Capture rainwater where it falls,” Agnew says. The group is filling 217,000 square feet of land with native plantings that will end up capturing 87,000 gallons of water during any given rain event. “We did take out an abandoned gravel road and planted it up. We also received a grant from MMSD and that has helped us strengthen our efforts.”

On Sunday, August 28th, Friends of the Monarch Trail are hosting their annual migration celebration from 4:00 until 8:00. They will feature guided tours of the sites, show people what they’re doing and why. The group will also point out the efforts and improvements made on behalf of the environment.

“We’re doing our part in the Menomonee River Watershed,” Agnew says. “People always tell me I can’t look at the little picture. I’m not. I’m doing the part I can actually do something about and the big picture benefits from it.”