MillerCoors a Leader in Water Conservation

Among businesses that need a fresh, clean and continuous water source, brewers like MillerCoors are atop the list.

“You can’t have beer without good water,” says Joan Meyer, an environmental engineer with MillerCoors at the Milwaukee facility.  The company also has breweries in Colorado, California, Ohio, Virginia and Texas so they’re water-conscious to the brim.

MillerCoors is the July recipient of the Milwaukee Metropolitan Sewerage District (MMSD) Green Luminary Award.  “I think we have a great relationship with MMSD,” Meyer says. “And we’re very excited about the award.”

Green Luminaries are recognized by MMSD for leadership in promoting and installing green infrastructure to capture, cleanse and reduce storm water runoff and the resulting pollution that would occur. Rain barrels and rain gardens, permeable pavement and green roofs are known as green infrastructure because they supplement the capacity of traditional gray infrastructure like metal sewer pipes.

It can take a brewer 20 gallons of water to produce a pint of beer.

“Without water, there is no beer,” Meyer says. “We do everything possible to do things right. We’re here because of Lake Michigan and we’ve got to be good corporate citizens, protect the lake.”

By 1890, Milwaukee breweries were exporting more than half a million barrels of beer each year. It’s safe to say we know a bit about beer, and the importance of water to the product. But we live in an age where there’s a decline in water resources, and many are taking arms against the problem. 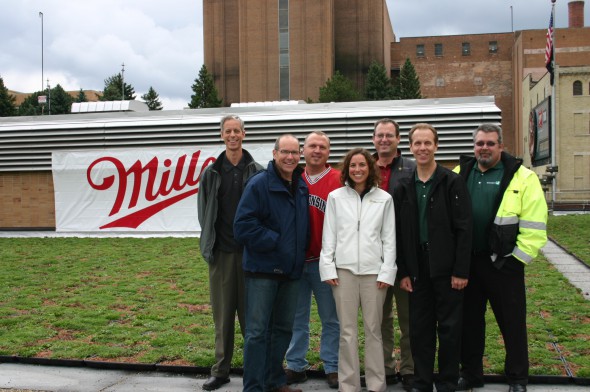 According to the Natural Resources Defense Council, an estimated 10 trillion gallons of untreated storm water runs off roads, rooftops, and parking lots each year, contaminating beaches, habitats and water resources.

“I think awareness has rubbed off,” Meyer says. “Having the green roof on building 35 is a great way to show people how to participate in green infrastructure. People who go on our Brewhouse tour get to see the efforts first hand.” The roof processes 90 percent of the water that falls on it.

Since 2005, MillerCoors has reduced the amount of water used in its cooling system by more than 50 percent by installing a new cooling tower. It has taken many other steps at its plants to reduce water usage.

Since 2007, MillerCoors has also annually donated 1,000 poly-drums to MMSD that they in turn offer as rain barrels.

“That’s also a direct way to affect and influence a thousand different families each year. Our employees ask where they can get one,” Meyer laughs. “I tell them to check with the MMSD.”

Meyer says two buildings on the brewery ground have storm drains that aren’t directly plumbed, so the company has created roof drains to abate any runoff. Rain gardens around the brewery capture runoff and don’t require much maintenance. Meyer says they make the grounds look more aesthetically pleasing. 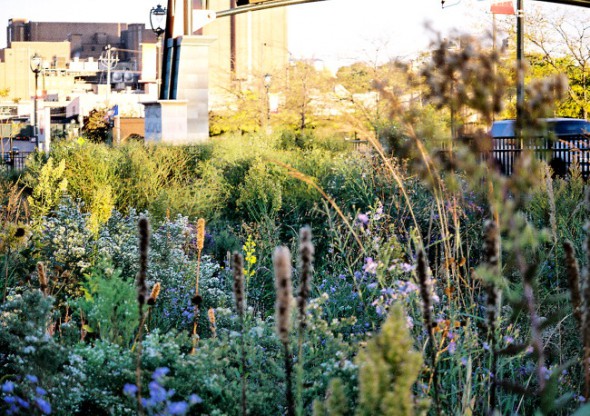 “All water for production is treated through carbon filters,” Meyer says. “Our testers have to make sure it’s consistent. So our Lite beer tastes the same in Milwaukee as it does in Texas.”

Meyer says she’s not sure if their breweries in other states have as extensive a program as they do in Milwaukee.

“In some places we brew, water is more scarce,” Meyer says. “Places like Fort Worth and Colorado. I know our facilities out there do a lot of dry-scaping. This is gardening that utilizes plants that need a minimal amount of water.”

Are people across the country buying into the idea they can be part of the solutions to better water?

“I think they are,” Meyer says. “But you also have to take into account where you live. For folks that live in California, Texas, they are living it. Experiencing it. Not being able to water their lawns. They get it. Living next to Lake Michigan, I think some people get it but it’s not as obvious.”

Meyer says businesses need to be efficient and reduce overall water usage wherever possible. “When our gardeners are working, they have to turn off the end guns when they’re not in use, and hit the plants directly with water, not water wastefully.”

To conserve resources, businesses must work together strategically, Meyer says.

“A farmer may be growing potatoes for General Mills, and we have our barley growing with the same farmer during a different season. It all comes down to partnering.”

The company’s relationship with the MMSD is another such partnership. “With nature conservancy,” Mayer says, “it’s been a huge win and we’ve seen better results.”