By Elizabeth Campbell, Wisconsin Center for Investigative Journalism - Sep 9th, 2016 11:26 am
Get a daily rundown of the top stories on Urban Milwaukee 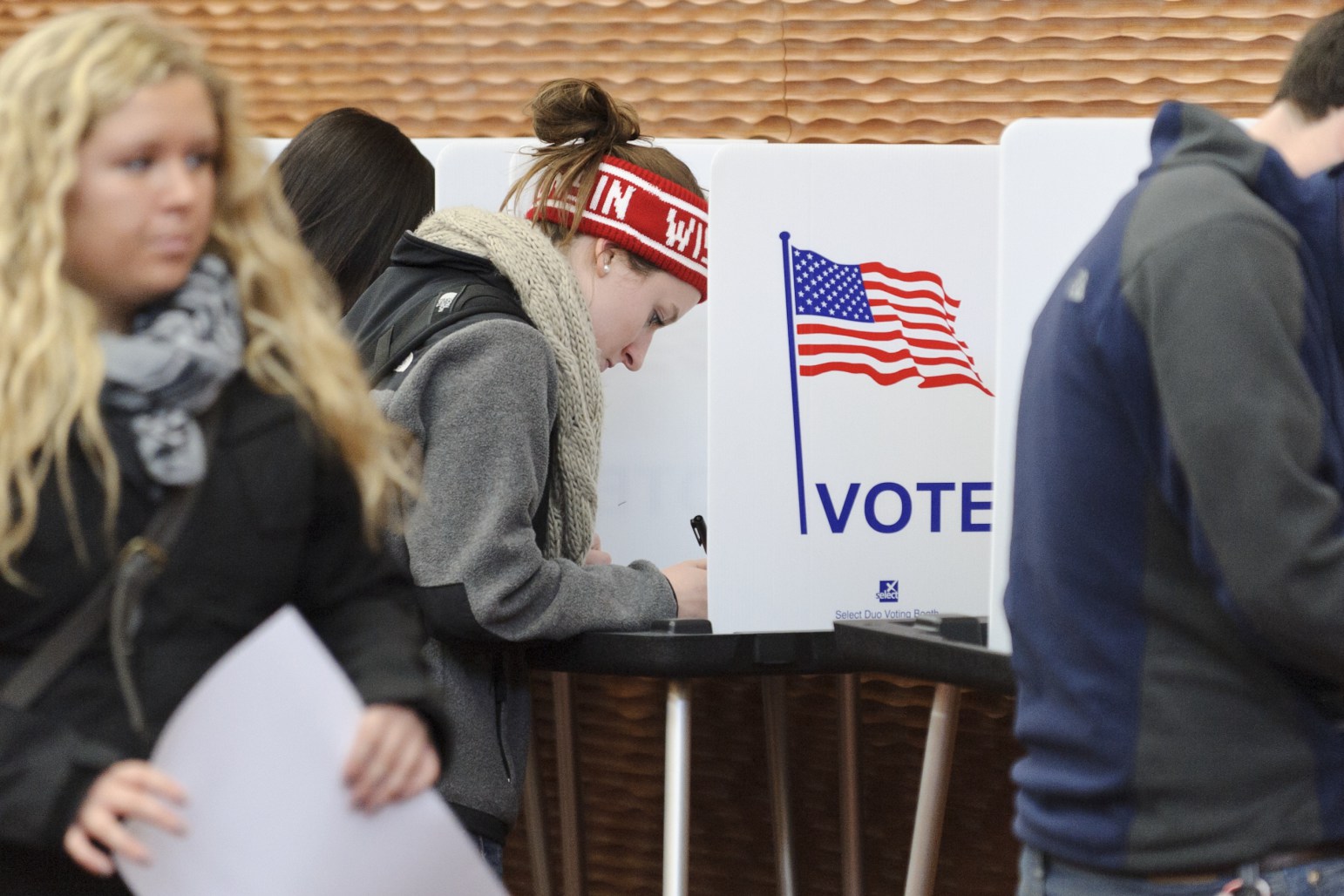 Eligible students cast their ballots for the presidential election and several state offices while voting at a polling place at Gordon Dining and Events Center at the University of Wisconsin-Madison on Nov. 6, 2012. Wisconsin’s on-again off-again voter ID law will require students to present a photo ID to vote in the Nov. 8 election. Photo by Jeff Miller of the University of Wisconsin-Madison.

There are many barriers that keep college students away from the polls. They include registration and voting requirements that vary from state to state, difficulty with obtaining the proper ID or proving residency, lack of familiarity with local issues and local candidates and uncertainty about how or where to vote — at home or at school.

Some laws passed over the previous four years, including in Wisconsin, have created even more barriers.

In August, a federal judge in Madison threw out some additional requirements for college students in Wisconsin, including a provision that had barred students from using expired but otherwise qualifying campus IDs for voting.

The trial included testimony that behind closed doors, Republican legislative leaders had discussed trying to suppress college turnout with the voter ID law. But U.S. District Judge James Peterson found the evidence was not enough to “establish discrimination on the basis of age.”

Nevertheless, additional requirements imposed by Wisconsin’s on-again, off-again voter ID law remain in effect for the Nov. 8 election. According to Common Cause in Wisconsin, regular student identification cards issued by just three of the University of Wisconsin System’s 26 campuses and seven of 23 private colleges are considered acceptable forms of ID for voting in the upcoming election. 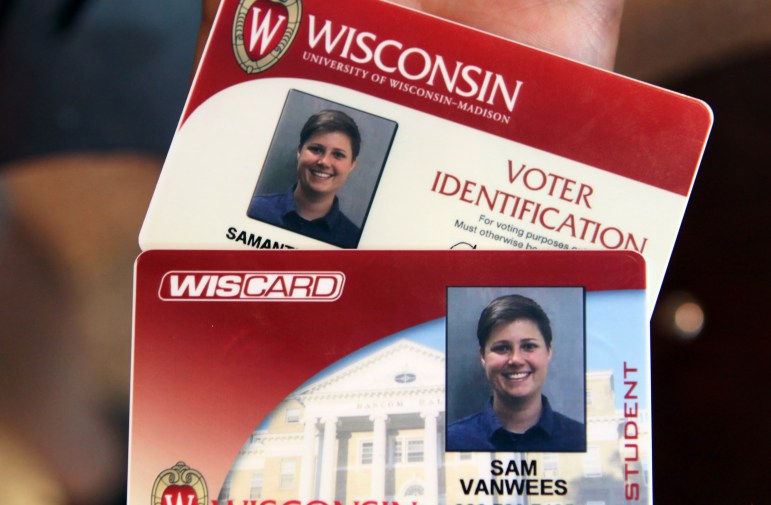 Sam VanWees from Des Plaines, Ill., says she was not aware she is eligible to vote in Wisconsin. She got her free voter ID card at Union South on the University of Wisconsin-Madison campus, along with her regular Wiscard student ID, on Aug. 30. Photo by Coburn Dukehart of the Wisconsin Center for Investigative Journalism.

To help students navigate the system, the newly formed Wisconsin Student Power Alliance plans to hire between 18 and 20 organizers on campuses across the state this fall whose first project will be a nonpartisan get-out-the-vote drive, co-director Lamonté Moore said.

Sam VanWees, a UW-Madison graduate student from Des Plaines, Ill., got her special voter ID at the end of August along with her WisCard student ID. Rather than drive back to Illinois or mail in a ballot, VanWees said she likely will vote in Madison for the upcoming election.

Despite their usually low turnout numbers, college students have the potential to influence elections. There were 17.3 million undergraduate students enrolled in degree-granting postsecondary institutions in 2014, according to the National Center for Education Statistics. Experts predict that population will increase to 19.8 million by 2025. 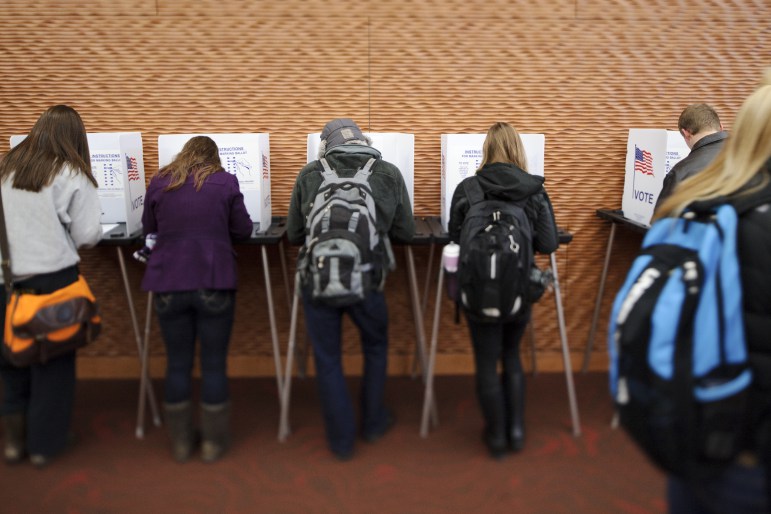 Yet millennials have the lowest turnout rates of all the generations. Because the majority of college students are under age 25, they make up a significant part of that age group. Some activists charge these young voters are being targeted by some of the recent changes in state voting laws.

“There’s a whole group of states that are trying to make it harder and harder every year to get to the ballots,” said Mike Burns, the national director for nonpartisan Campus Vote Project, which focuses on informing and helping solve student voter issues. “It’s stuff that boils down to a lack of information as opposed to a lack of interest.”

Students must show proof of residency

In 1979, the U.S. Supreme Court affirmed a ruling that holding college students to a different standard of residency than other people or requiring them to swear they will remain in the community after graduation violates the 26th Amendment in the case Symm v. United States.

“You don’t have to say, ‘I intend to return here forever,’ ” Burns said. “You don’t need to know that you’re going to be there after graduation. Because it’s based on people’s subjective intent, it’s squishy.”

Appalachian State University student Rachel Clay served as an election protection field coordinator for a campus program and organized poll watchers. She said she and her poll monitors witnessed students at her North Carolina school who had issues meeting voter residency requirements.

While Clay said this was — in part — because the election officials were unaware of the laws, it also was done because “the Board of Elections doesn’t really want students to vote.”

“Our polling officials, they are really not helpful,” Clay said. “They misinform. They lie to students. They scare students away from voting provisionally, and they take really, really long to do everything. So our lines are super duper long, and students just can’t stand in line for two hours.” 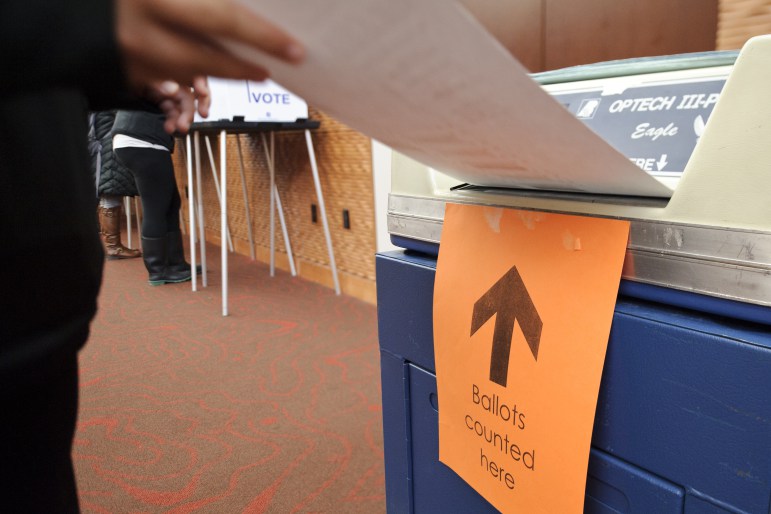 Watauga County Board of Elections Director Matthew Snyder said when the issue was investigated in March, there was no “substantiating evidence” to Clay’s claim.

“They did address the issue on the first day of early voting with the poll workers to make sure they followed procedures,” Snyder said. “They found no evidence that workers were impeding the process.”