In Wisconsin, Donald Trump must overcome his second-place finish in the state’s Republican primary — and a polling gap with Democrat Hillary Clinton 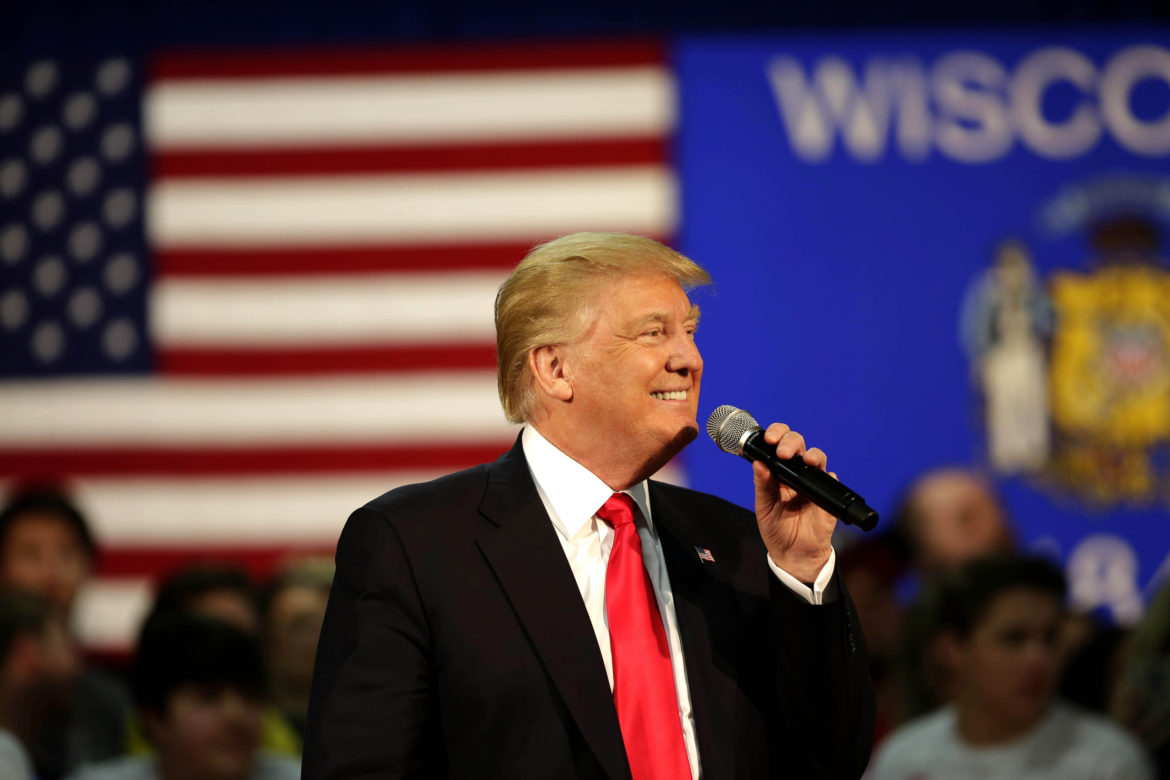 YOUNGSTOWN, Ohio – Trump signs in her backyard. Trump magnets on her refrigerator. Trump buttons on her dining room table. Kathy Miller is the Mahoning County chairwoman for Donald Trump.

While handing out Trump signs in June at a Republican headquarters just south of Youngstown, Ohio, she was approached by a woman in her late 80s, who said, “I have never voted Republican in my life. Give me the biggest sign you’ve got.”

In economically struggling communities like Mahoning County — where most steel mills have closed — many white, working-class Democrats are voting for Trump, registration records and 2016 presidential primary results show.

According to a November 2015 Public Religion Research Institute poll, 72 percent of Americans and 78 percent of white working-class Americans believe the country still is in a recession. A News21 analysis of the General Social Survey conducted by the National Opinion Research Center at the University of Chicago also found that in 2002, the percentage of white Americans with hardly any confidence in the executive branch of the federal government was just under 20 percent; by 2014, that number was nearly 50 percent.

“The disenfranchised voter who has lost their job as a result of policies affecting the coal industry and other heavy manufacturing jobs are feeling very frustrated with Washington,” said Rex Repass, founder and CEO of Repass, a national public opinion research and strategic consulting firm. “Even though many are historically Democratic counties, they have become very red and very angry.” 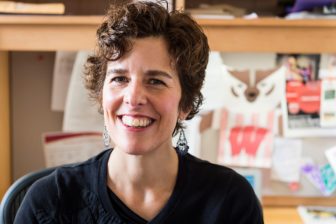 In April, Trump lost Wisconsin’s Republican primary to Texas Sen. Ted Cruz. Cramer attributed that to the influence of conservative Milwaukee talk radio hosts, who at the time allied with Wisconsin’s top GOP leaders against Trump. “Counties reached by Milwaukee media went for Cruz,” she said, “the others for Trump.”

Added Cramer: “Trump’s message seems to resonate … because he is saying, in effect, ‘You are right— you are getting a raw deal, and some undeserving others are getting way more than they deserve. We need to make drastic changes so that those people stop getting money/respect/attention at your expense.’ ”

In Tennessee, after a clothing factory outsourced jobs and operations to Mexico, a county that voted Democratic in the 2000 and 2004 presidential elections went Republican in both 2008 and 2012.

Mahoning County, Ohio, where Youngstown is the county seat, labors under the loss of the steel industry, and more than 6,000 voters have switched from Democrat to Republican this year. 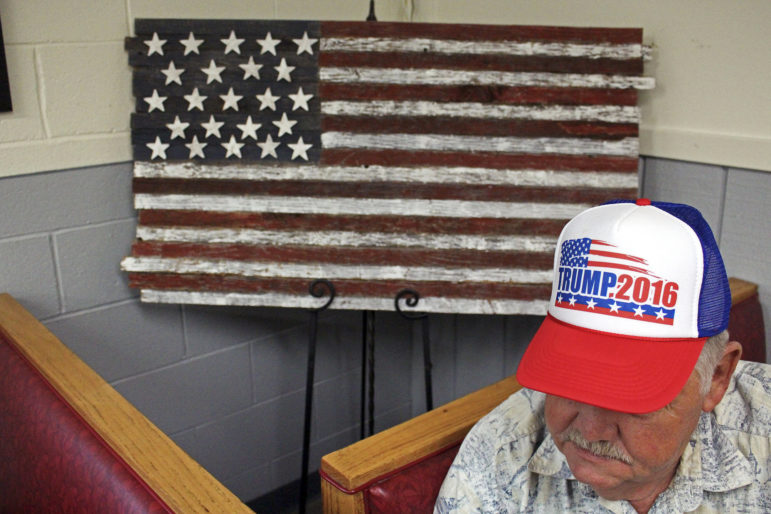 Roy Rogergray, 71, has lived in Celina, Tenn., all his life and is voting for Donald Trump in November. He said he doesn’t care for Trump’s personality, but he agrees with most of his policies. Photo by Emily Mills of News21.

Clay County, Tennessee, used to be home to four garment factories. One of the largest was OshKosh B’gosh, a Wisconsin-based company. The children’s clothing factory employed between 1,500 and 2,000 people from the 1950s to the 1990s. With a county population between 7,000 and 8,000, everyone worked there or knew someone who did.

“Just about everybody who wanted a job, if they’d work, they had a job at OshKosh,” said Doug Young, director of the county’s Three Star Initiative, a program focused on improving bringing jobs to the area. 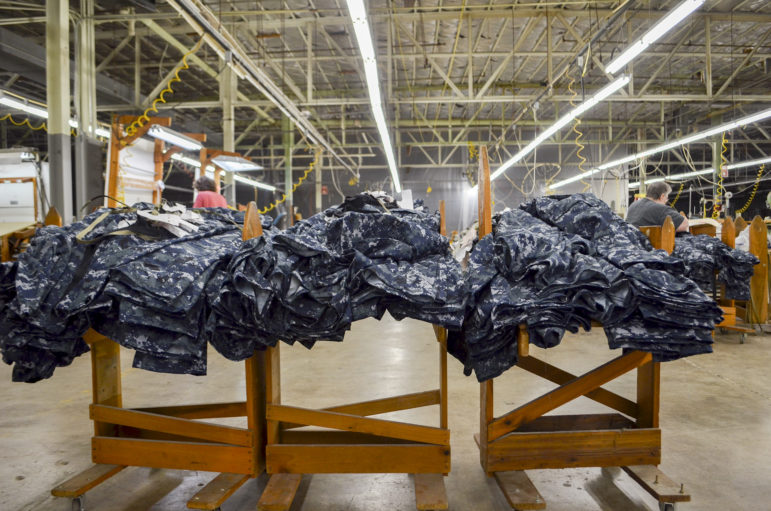 Racoe Inc., a military fabric cutting company, moved into the old OshKosh B’gosh factory in December 1997 in Celina, Tenn. Only six people now work in the 66,000-square-foot building that once employed up to 2,000 people. As the county’s economy struggles, many historically Democratic voters are switching to the Republican Party. Photo by Lian Bunny of News21.

The OshKosh factory shut its doors in November 1996 and moved its operations to Mexico, taking advantage of the cheap labor options the North American Free Trade Agreement provided. The agreement’s purpose is to establish a free-trade zone in North America by lifting tariffs on a majority of goods the United States, Mexico and Canada produce and trade with one another.

Unemployment in Clay County, which is nearly 97 percent white, has evened out to a little more than 5 percent compared to the national average of 4.7 percent in May.

Yet the county still has a 24 percent poverty rate, and voters who historically have been Democrats are switching to the Republican Party. In March’s Republican primary, Trump won Clay County with 57.1 percent of the votes — more than double the votes Clinton got.

“I think his popularity is (because) just everybody is mad, and he is saying what they feel,” said Timothy Scott, the former Democratic chairman in Clay County. “There will be a lot of Democrats voting for him.”

In the Rust Belt of Ohio and Pennsylvania, steel was the dominant industry. But as those companies outsourced their labor to China, voters grew frustrated with the job loss. Forty years after its steel mills closed, the poverty rate in Youngstown, Ohio is just over 40 percent.

“The opportunities aren’t here,” said Frankie Susany, 50, who grew up in the area and now owns a small business. “What used to be a thriving city in Youngstown is brown fields, abandoned mills, abandoned buildings, abandoned factories.” 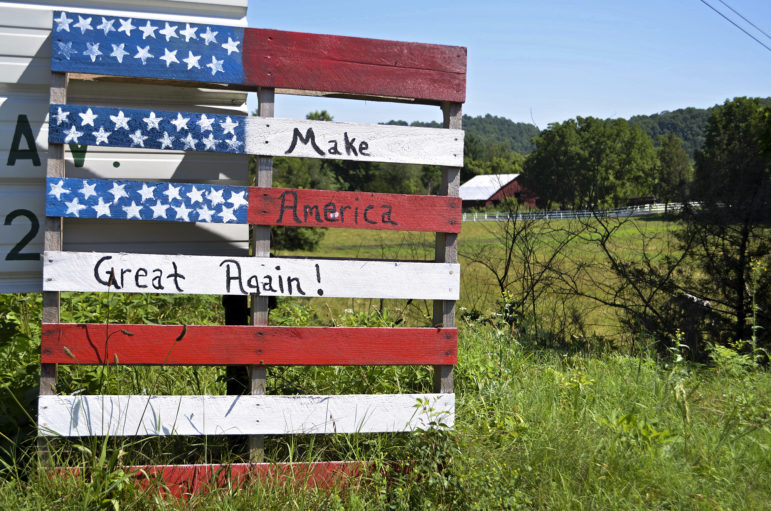 This handmade sign, made from a wooden pallet, declares support for Donald Trump in Clay County, Tenn. The area’s poor economy is leading some of its traditionally Democratic residents to support the Republican billionaire businessman, who has promised to turn around the U.S. economy. Photo by Lian Bunny of News21.

Trump’s “Make America Great Again” message resonates with Susany, who said that when he grew up, young people who worked in the steel mills had great lives. They drove new cars and had their own places to live right out of high school.

“That’s what this election is about,” he said. “If we don’t change it now, our grandchildren are never going to know the America that (people my age) grew up in.”

In Westmoreland County, Pennsylvania, which is 94 percent white with nearly a 10 percent poverty rate, 5,400 voters switched to the Republican Party to vote for Trump in the primary. The region’s steel factories shut down in the 1980s, and residents remain bitter about the job loss, said Blair Adams, a third-generation owner of K-Castings Inc., a manufacturing plant.

“All these people that are in this manufacturing area are definitely shifting (parties) because they understand that their jobs are at risk,” Adams said.

For generations in Kentucky’s coalfields, including in the town of Hindman, families spent most of their lives working underground in the mines. As those jobs disappear, some Democrats are looking to options outside their party for change and the chance for an improved economy.

Meanwhile, the government put environmental regulations into place, encouraging states to switch from coal to natural gas as a power source. Kentucky residents such as Ballard Combs, an 81-year-old former coal miner from Knott County, see Obama as the face of these changes.

“I loved the mines,” said Combs, who worked underground most of his adult life. “Obama shut them all down.” 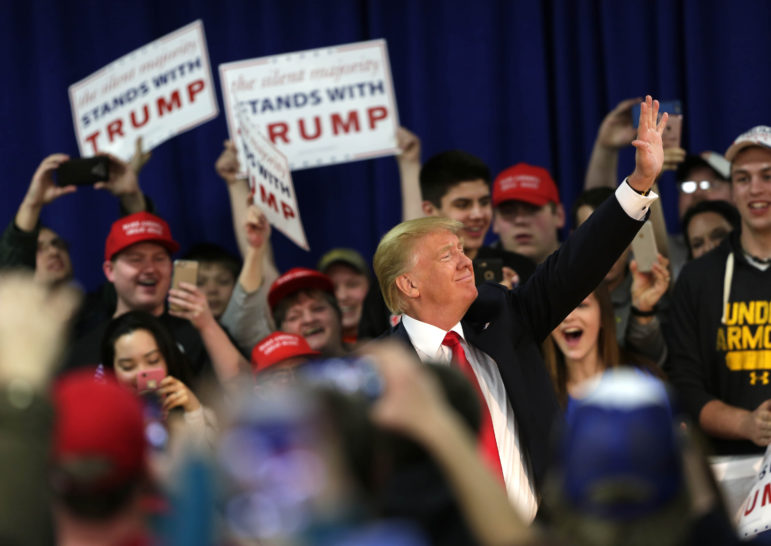 Nearly 90 percent of registered voters in Knott County, which is 98 percent white, are Democrats because it’s what their families have been for generations.

But since 2008, the county has increasingly voted for the Republican presidential candidate. Both Combs and his father were Democrats, but he’s voting for Trump.

Knott County Clerk Ken Gayheart said registered Democrats come into his office daily to switch their registration to the GOP. When the coal companies left, Gayheart said no industries moved in to fill the vacancy.

“These old hills were never worth much,” Gayheart said. “We don’t do anything, we don’t make anything here in Knott County.”

Nearly 34 percent of the county’s residents live below the poverty line. In May, the unemployment rate was 10.5 percent.

“Eastern Kentucky is in tough shape, but a lot of rural America is in a tough time,” said Tim Marema, vice president of the Center for Rural Strategies in nearby Whitesburg. “Something needs to change. That’s the point for the residents on the Trump side.”

Taylor Gilmore contributed to this report. This report is part of a project on voting rights in America produced by the Carnegie-Knight News21 program. The Wisconsin Center for Investigative Journalism distributed this report.