Will Latinos Turn Out for Nov. 8 Election?

Hispanic voters in Wisconsin and beyond are poised to flex their political muscles, but disenchantment, language differences create barriers 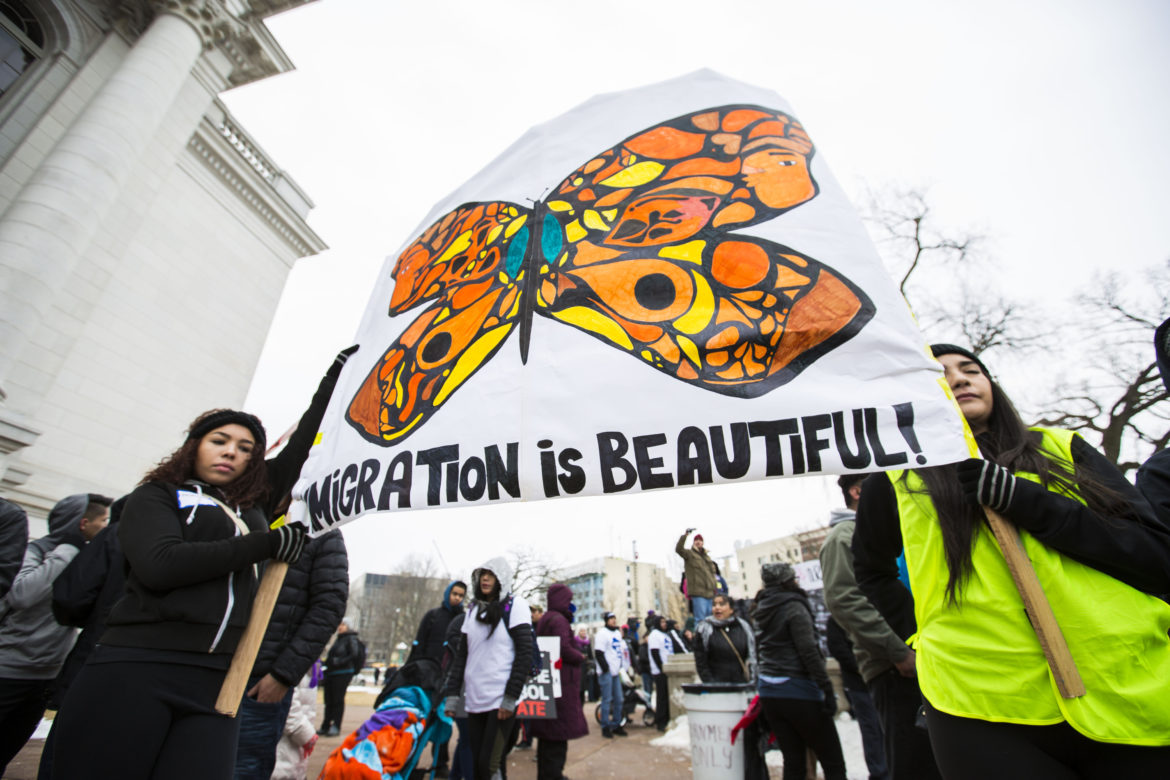 Latinos protest immigration bills and demonstrate their contribution to the Wisconsin economy outside the state Capitol building in Madison, Wis., on Feb. 18, 2016 during the ‘Dia Sin Latinos,’ or Day Without Latinos, event. Photo by Saiyna Bashir of the Cap Times.

Andrea Montes turns 18 just weeks before the November election, and the Beloit resident plans to vote for the first time.She said she had always planned to exercise that right, but an incident in April made it clear just how important it was to cast her ballot. Montes, a Beloit Memorial High School student, was playing in a high school soccer game in Elkhorn when it turned ugly. Fans on the opposing team began yelling “Trump ’16” and “Build that wall!” at her Latina teammates, she said.

“The candidates this election aren’t the best,” Montes said. “But I feel like if I don’t vote, it means that I’m OK with Donald Trump leading the country. And I’m not. People of color need to be voting this election.”

The soccer incident made national headlines, and Democratic presidential candidate Hillary Clinton even brought it up during a speech at the League of United Latin American Citizens conference in Washington, D.C. It’s exactly the kind of experience experts say might help galvanize the Latino electorate to vote this November. 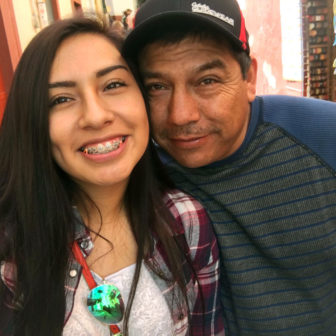 Beloit (Wis.) Memorial High School senior Andrea Montes, seen here with her father, Manuel, looks forward to voting for the first time this year. Montes, a member of the school’s varsity soccer team, says she is motivated by a racially charged incident at a game in Elkhorn in which opposing fans chanted “Build that wall!” at Latina members of Beloit’s junior varsity squad. Montes’ family is originally from Mexico. Photo courtesy of Andrea Montes.

Organizations like Voto Latino and the Southwest Voter Registration and Education Project have tried to capitalize on the momentum, and the groups have spent months knocking on doors, sending text messages and blasting the airwaves to register Latinos. One expert said he expects a “mad frenzy” of voter registration leading up to the election.

Yet, it’s unclear whether Latinos will turn out. If they do, they have tremendous potential to affect the outcome.

The Latino population has jumped from 4 percent of the country’s population in 1965 to nearly 20 percent in 2015, according to Pew Research Center; in Wisconsin, it is 6.4 percent, roughly 42 percent of whom are eligible to vote. The growth in the population has been steady and noticeable. Today, there are more than 55 million Latinos in the United States, and an expected 27.3 million who will be eligible to vote in November.

But a longstanding gap remains between Latinos who can vote and those who will. The National Association of Latino Elected Officials projects 13.1 million Latino voters will cast ballots this November, which is a 17 percent increase from the last presidential election. But it’s still less than half of the eligible voters.

During the past few presidential elections, national media began to speculate on the effect of the Latino electorate and even gave it the moniker “the sleeping giant.” But every year, despite increased potential, it seemed that giant hadn’t yet awakened.

Indicators suggest this could be the year: Latinos have registered to vote at increasing rates, and many Latino voters indicated they’re more interested in this election — motivated by issues such as the economy and immigration and by Republican presidential nominee Donald Trump’s anti-immigration stance. 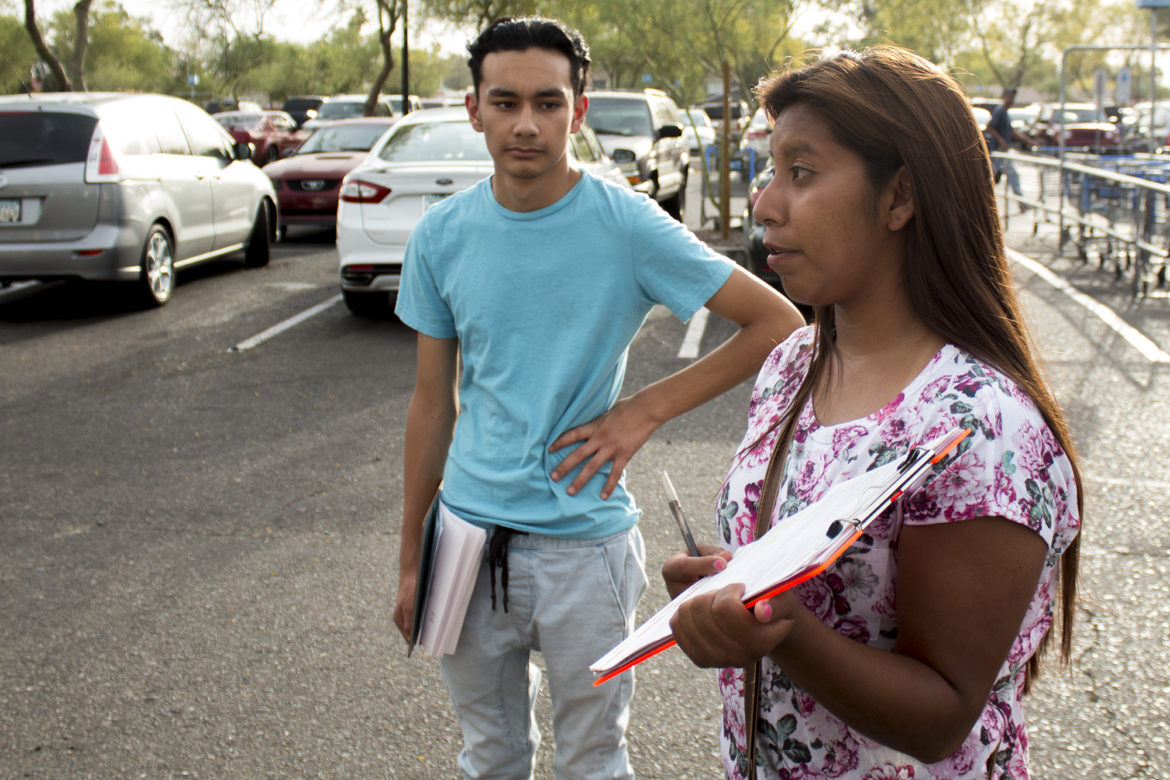 Yenni Sanchez, 18, has registered people to vote for three years. Daniel Flores, 16, is also a volunteer. They are signing up voters at a Wal-Mart parking lot in Phoenix. Photo by Courtney Columbus of News21.

“Harsh rhetoric that has been spewed by Donald Trump, right out of the gate, comparing Mexicans to rapists and murderers, could help galvanize the Latino vote to vote against him,” said Joseph Garcia, director of the Latino policy center for the Morrison Institute for Public Policy at Arizona State University, which researches and analyzes critical issues in the state.

At the same time, several factors may keep Latinos away — or at least prevent the electorate from reaching its full potential — this November. Candidates have largely neglected this segment of the population. States have implemented new voting restrictions, creating barriers for both registration and voting. And millennials, who tend to stay away from the polls, make up nearly half the eligible Latino electorate.

More than 60 percent of the nation’s Latinos have a high school education or less. And almost a quarter live in poverty. Voters who are young, poor and less educated don’t vote in large numbers, Garcia said.

No one can say for certain when Latino voter turnout will surge, but Garcia said eventually, it will. “(This election) will be the last gasp when it comes to how you can totally disregard an entire ethnic group of voters,” Garcia told News21.

On Feb. 18, protesters crowded around the Wisconsin Capitol in Madison during a movement they called “Dia Sin Latinos” — a day without Latinos.

Latino business owners, employees and advocates were protesting two bills — one of which would prevent voters from using a city-issued ID to vote. Organizers of the movement encouraged Latinos to skip work and join the crowd at the Capitol or stay home to prove how much the state’s economy relies on Latino workers. 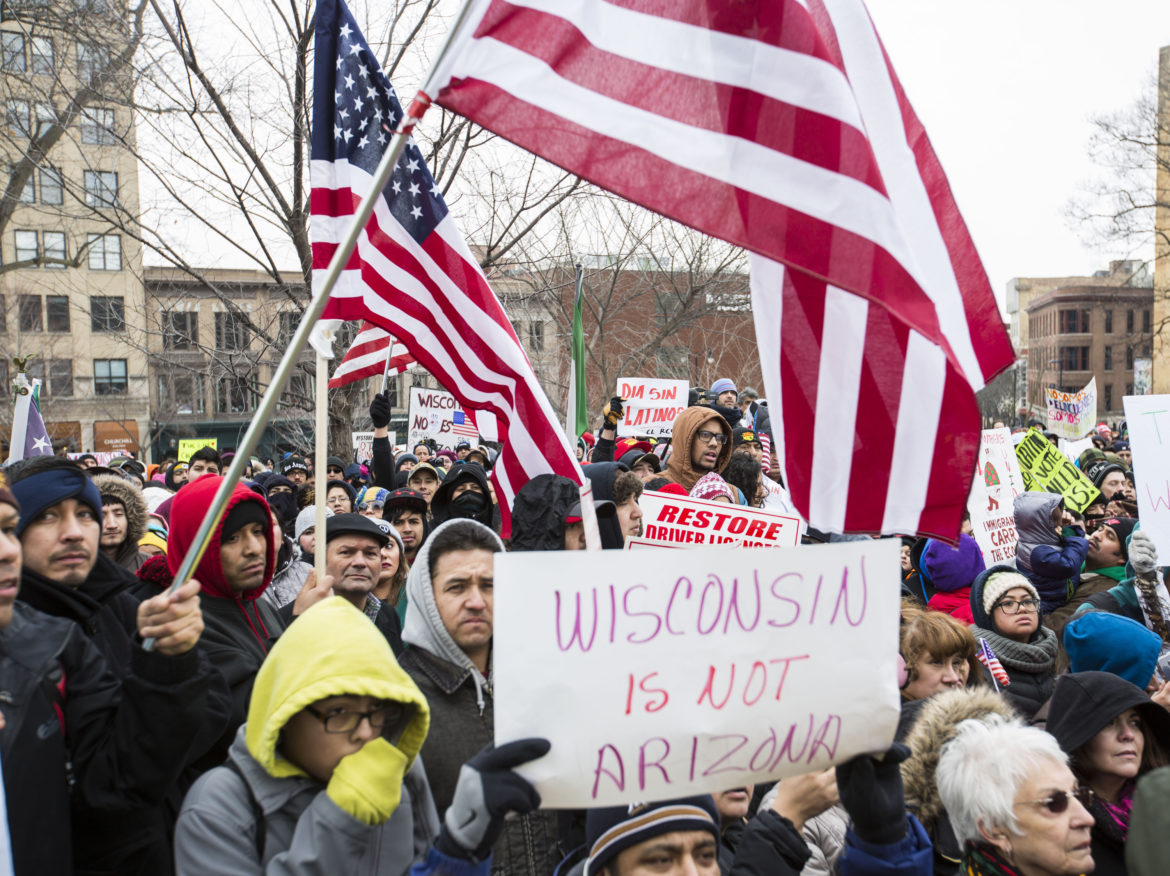 Thousands of Latino protesters and supporters carry signs outside the Capitol building to protest immigration bills on Feb. 18, 2016, Madison, Wis. The number of Latinos in Wisconsin has grown rapidly in recent years, now accounting for about 6.4 percent of the population. Photo by Saiyna Bashir of the Cap Times.

Benjamin Marquez, a professor of political science at the University of Wisconsin-Madison, called the protest a success based on the sheer size of the rally. An estimated 20,000 people showed, according to WMTV, an NBC affiliate.

Joseph Statz, an owner of the Statz Bros dairy farm in Sun Prairie, said his 4,000-cow milking operation couldn’t exist without Latino workers. His 110 employees milk, mix feed, scrape stalls and lay fresh bedding for the cows. At least two-thirds of his workers are Latino, he said.

“They’re the ones who come and apply for the jobs,” Statz told News21. “It would be hard for a lot of people to exist if it wasn’t for them. We need to help them — whatever it’s going to take to get them to stay.” 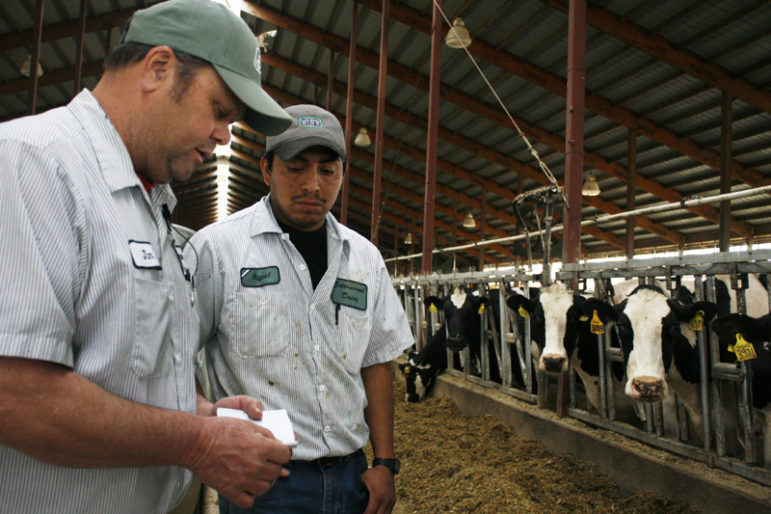 Latinos make up about 16 percent of the American workforce, according to statistics from the U.S. Bureau of Labor Statistics. They hold more jobs in agriculture, construction and maintenance than any other group.

Yet, Hispanics earn less than other workers. Over a 12-month period, Hispanic workers earned about $10,400 less than full-time workers in other racial groups, according to a 2013 report by the U.S. Congress Joint Economic Committee.

And that may speak to the need for Latinos to exercise their voice in the political spectrum.

Latinos have repeatedly cited economic matters as the most important issue when it comes to voting. For example, more than 71 percent of Latino voters said they want the next president to support increasing the minimum wage from $7.25 to $15, according to a February poll among 1,200 voters conducted by Noticias Univision and The Washington Post.

Experts predict tight races in states such as Florida, Nevada and Colorado this November. According to Pew numbers, Latino voters make up 15 percent or more in those three battleground states — so Latino turnout could prove the strength of the voting bloc there.