Will Latinos Turn Out for Nov. 8 Election?

Hispanic voters in Wisconsin and beyond are poised to flex their political muscles, but disenchantment, language differences create barriers

Alma Marquez, founder and president of a communications and public affairs firm that focuses on education-related issues and political and civic engagement, said Latinos are often portrayed as apathetic because of their low voter turnout.

But some Latino voters and experts said it’s not apathy: They do care about politics and understand the importance of civic engagement. They said other factors keep Latinos away from the polls, including cynicism, unfamiliarity with voting and language barriers. 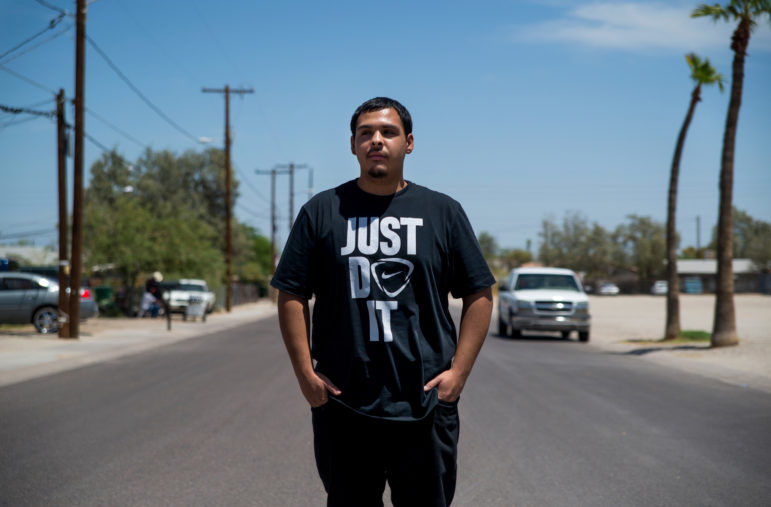 David Castorena, 24, of Chandler, Ariz., stands in the street of a small, largely-Latino community of Guadalupe where he attends church. Castorena said he does not plan to vote in the upcoming November Election because he thinks that Donald Trump will win either way. Photo by Roman Knertser of News21.

Other Latino voters, like Sabino Nañez, 34, said Latinos will vote “when they feel like they are first-class citizens” instead of third-class citizens.

The Milwaukee resident said when the U.S. Supreme Court blocked President Barack Obama’s expansion of Deferred Action for Childhood Arrivals and Deferred Action for Parental Accountability in June — which would have given parents of U.S citizens legal presence — it discouraged the Latino community even more.

David Castorena told News21 that disillusionment will keep him from voting. The 24-year-old Guadalupe, Arizona, native voted for Obama in 2012, but he said he won’t vote in this election. “I just don’t think my vote matters,” he said. “Trump is going to win anyway.”

Language also can be a barrier. About 15 percent of Latinos speak limited English, according to data from the U.S. Census. If limited-English speakers make up more than 5 percent of a community’s population, among other requirements, federal law requires those communities to provide bilingual election materials and allow translators at the polls.

Some legislative requirements for voter registration and photo voter identification at the polls also may limit Latino voting.

The National Association of Latino Elected and Appointed Officials projects 875,000 Latinos may have a harder time voting this year because they live in the 20 states that approved or implemented new voting restrictions since 2012, according to a News21 analysis. Many of these policy changes have been challenged in court, and even overturned, creating uncertainty over what rules will be in place by November. 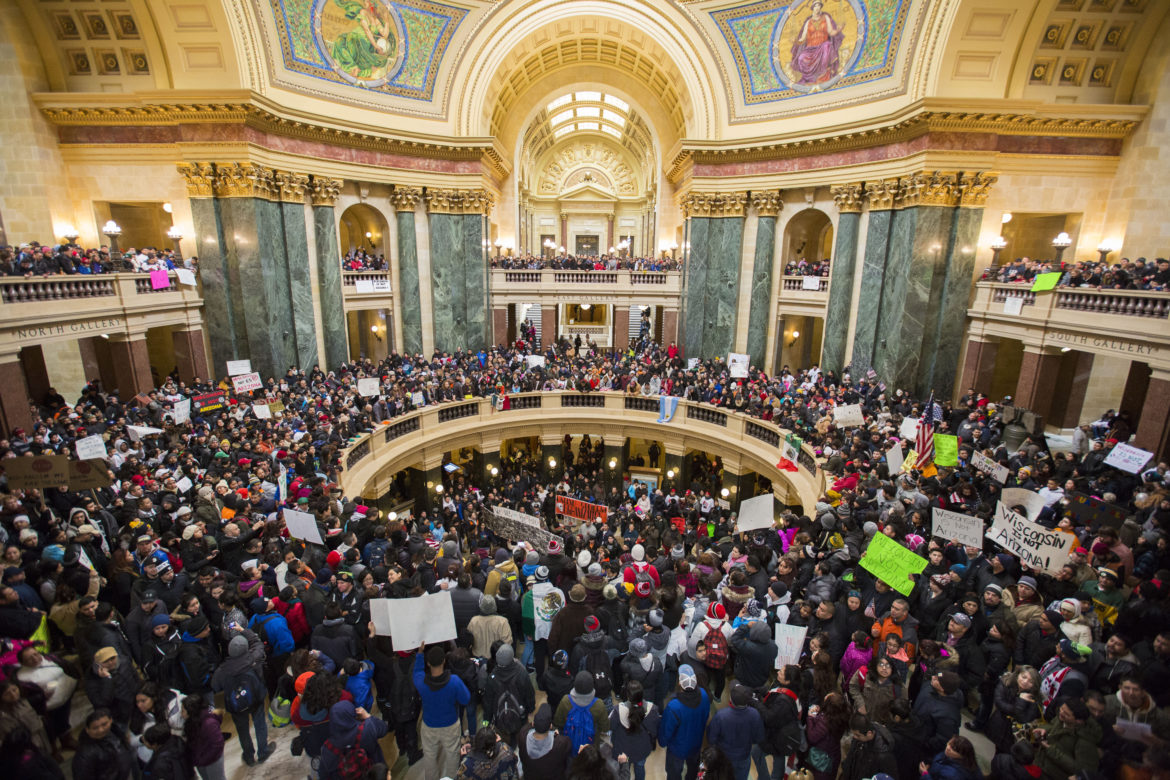 Latino protesters and supporters participate in the ‘Dia Sin Latinos,’ or Day Without Latinos, event inside the Capitol building to protest immigration bills on Feb. 18, 2016, Madison, Wis. The protest also was designed to highlight Hispanic’s contribution to Wisconsin’s economy. Photo by Saiyna Bashir of the Cap Times.

“Latinos are one of these groups hit the hardest by (the) strongest voter ID laws,” said Stella Rouse, associate professor and director of the Center for American Politics and Citizenship at the University of Maryland. “These laws target people who don’t speak the native language, don’t have the resources, don’t have the proper ID, who are poor (and) don’t have the transportation to get that ID. Latinos, just like African-Americans, the elderly, the rural communities, fit into those groups that really create obstacles for voting.”

Across the United States, 13 percent of African-Americans and 10 percent of Hispanics do not have proper photo ID, while only 5 percent of whites lack the proper ID, according to Project Vote, a nonpartisan, nonprofit voter advocacy organization.

Latinos poised to be majority

Census population projections suggest that in 2044, the United States will become a majority-minority nation, with Latinos making up almost a quarter of the entire population.

Millennial voters make up a larger share of the Latino electorate than they do any other ethnic group. Research predicts this trend will continue. 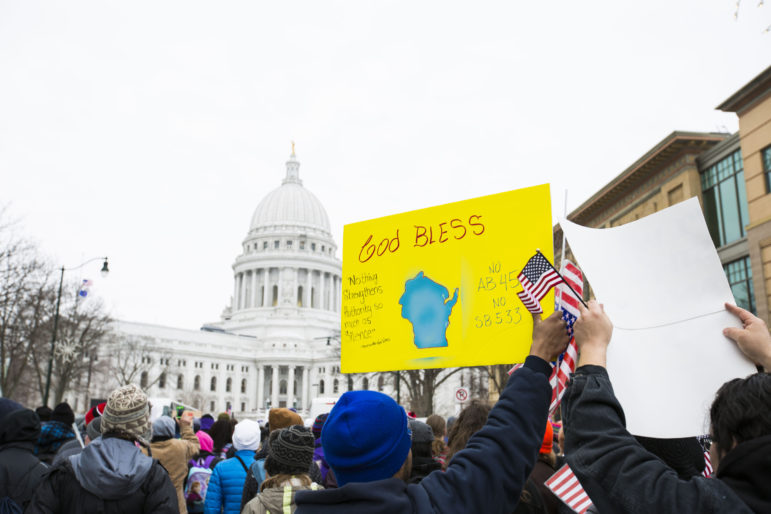 Latino protesters and supporters carry signs to the Capitol building to protest immigration bills on Feb. 18, 2016, Madison, Wis., including one that banned the use of city-issued identification to prove identity at the polls. Wisconsin is one of 20 states that has enacted new requirements for voting, including voter ID, 2012. Photo by Saiyna Bashir of the Cap Times.

Montes, the 17-year-old from Wisconsin, is just one of the 3.2 million Latinos who have, or will, turn 18 in time for the 2016 election, according to Pew numbers. She is the face of the future Latino voter.

Montes is U.S.-born; only a quarter of the Latino electorate is foreign-born. Montes’s father came to America from Guanajuato, Mexico, as a teen looking for work. He later brought his wife to Beloit, where they raised Montes, her older brother and sister.

Her father became a citizen six years ago, and her mother followed suit two years later.

And Montes is eager to vote.