By Andrew Hahn, Wisconsin Center for Investigative Journalism - Aug 7th, 2016 10:56 pm
Get a daily rundown of the top stories on Urban Milwaukee

Elsewhere in the state, constituents and lawmakers face other tensions over the management of water. The DNR and the U.S. Environmental Protection Agency held a joint meeting in June in Luxemburg in Kewaunee County to present possible solutions drafted by volunteers and officials to the bacteria and nitrate contaminating area wells.

In the audience were two men who will square off in the Nov. 8 election to represent the Assembly’s 1st District: Incumbent Rep. Joel Kitchens, R-Sturgeon Bay, and Democratic challenger Lynn Utesch, a beef farmer and environmental activist from Kewaunee.

State Rep. Joel Kitchens, R-Sturgeon Bay, left, is seen at a meeting in Luxemburg, Wisconsin on June 23 where residents of the area discussed possible solutions to Kewaunee County’s groundwater contamination. Lynn Utesch, right, also in attendance, is running against Kitchens for a spot in the state Assembly. Photo by Coburn Dukehart of the Wisconsin Center for Investigative Journalism.

Kitchens paired up with Krug in 2014 on a piece of legislation that would have created tougher regulations for high-capacity wells in environmentally sensitive areas. The measure never got a hearing. In an interview, Kitchens said it is “virtually impossible” to pass any new laws that would add more regulation in the Republican-run Legislature.

“It (the water issue) affects our areas very directly, mine and Rep. Krug’s, so obviously we have no choice but to talk about it,” Kitchens said. “It’s becoming more and more visible.”

The controversy over water quality has prompted the Walker administration to propose development of new rules that would set stricter standards for manure spreading in areas such as Kewaunee County with shallow soils and fractured bedrock. In proposing the rule, DNR acknowledged that existing statewide regulations do not adequately protect ground and surface water from contamination in vulnerable areas.

But environmental groups, including Clean Wisconsin and Midwest Environmental Advocates, have criticized DNR for pulling back on more stringent rules that had called for limits on controversial liquid manure spraying and other restrictions on CAFOs. 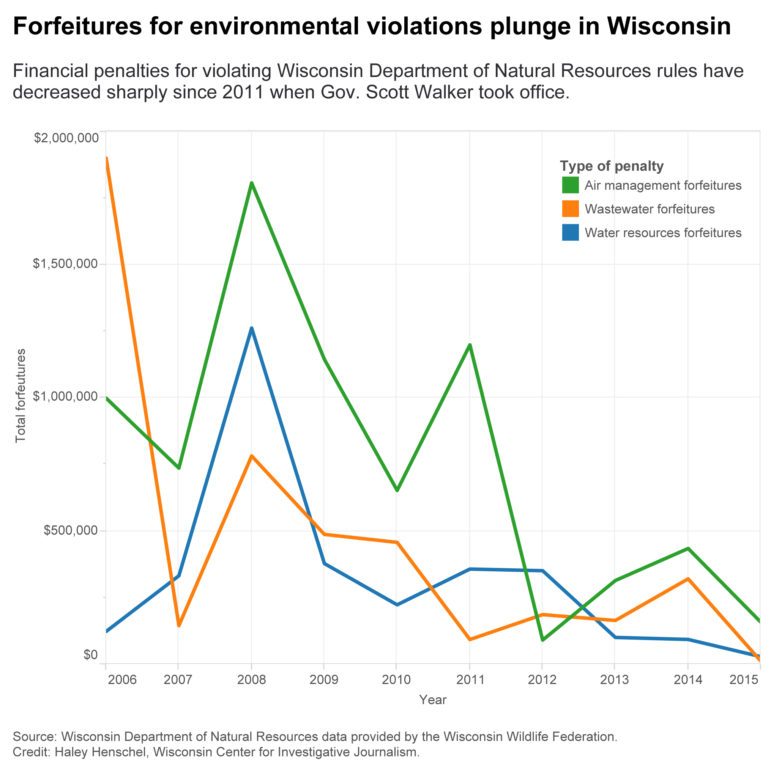 Graph by Haley Henschel of the Wisconsin Center for Investigative Journalism.

Utesch and other like-minded citizens petitioned the EPA to investigate the contamination in Kewaunee County. An EPA representative told the crowd of roughly 150 in Luxemburg the agency has no authority in the matter.

“I certainly appreciate the fact that folks would like clean water today,” said Tinka Hyde, director of the EPA’s water division for several Midwestern states. “I work in a world of rules and regulations and allocated budgets that tell me what I can and can’t do … I don’t have the authority to regulate private wells. I have the authority to regulate public water supply systems, and those are different things.”

In an interview, Utesch, a member of the DNR workgroups, said that is not good enough.

“This is a public health emergency we’re having here, and there are emergency measures that can be put in place if the Legislature and the governor wanted to actually do something about these issues,” Utesch said. 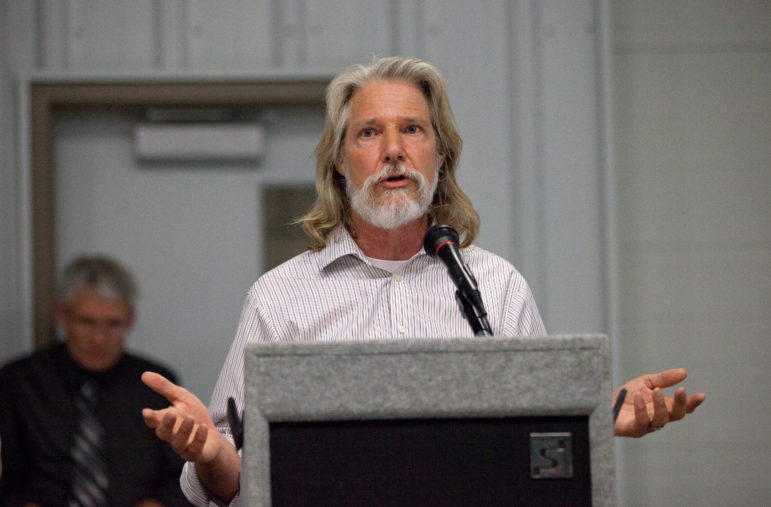 Lynn Utesch speaks at a meeting with the state Department of Natural Resources, the U.S. Environmental Protection Agency and residents of Kewaunee and Door counties at at the Kewaunee County Fairgrounds in Luxemburg, Wis., June 23. Utesch, a Democratic candidate for state Assembly, is one of the founders of the group Kewaunee Cares and has been a vocal speaker on the issue of concentrated animal feeding operations and groundwater contamination in Kewaunee County. Photo by Coburn Dukehart of the Wisconsin Center for Investigative Journalism.

The agency told the EPA in late July that in addition to more limits on manure spreading in Kewaunee County, it is also considering shifting resources toward stepped up oversight and enforcement of existing CAFO rules.

Kitchens, a veterinarian and first-term lawmaker, favors that rule change. Beyond that, however, Kitchens said voluntary measures would be more effective than new laws, saying “the majority of farmers want to do the right thing.”

But a 2015 study conducted by the University of Wisconsin-Extension and UW-Green Bay found that merely encouraging farmers to adopt practices that protect groundwater did not reduce the number of “brown water incidents.”

“I hope that people will really stand back and look at what’s happened because, in political terms, there’s been an awful lot accomplished in the last year and half or so,” Kitchens said. “Things are never going to move as quickly as people want them to. You can’t blame people; if they have a bad well they want it right tomorrow. But by political standards, things are moving pretty darn quickly.”

But Utesch said voluntary measures will not reduce pollution from large farming operations.

“I am a farmer,” Utesch said. “I do believe in farming. I think actually what is taking place here is that farmers are not being represented. What’s being represented in this area is agri-business.”

Dairy Business Association government affairs director John Holevoet said he favors farmers working with the public and the DNR toward “viable, long-term solutions to issues we’re having and other places in the country are having.”

“I think it’s actually an exciting time,” he added. “There’s a lot of good work being done.”

But while stakeholders argue over what the rules should be, and legislators return to their districts to prepare for November, conflicts over pollution from agricultural facilities continue.

In early July, manure from a large Calumet County farm, spilled into Plum Creek after heavy rains, killing fish in a stream that runs into the Fox River. The DNR is investigating the spill at Shiloh Dairy, which is owned by Gordon Spiers, the president of the Dairy Business Association.

Water at issue in Senate race

Water quality also has become injected into the U.S. Senate race, as Democrat Feingold tries to win back the seat he lost to Johnson six years ago. 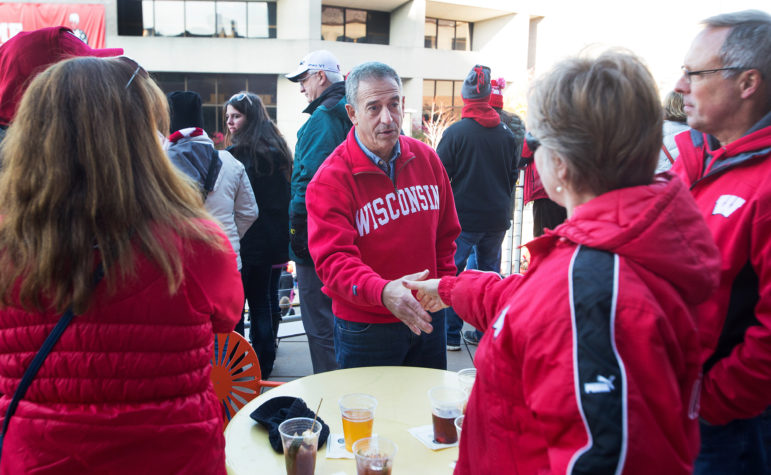 Former U.S. Sen. Russ Feingold works the crowd at Union South before the start of the Badger football game against the Purdue Boilermakers, Oct. 17, 2015 at Camp Randall Stadium. Feingold, a Democrat, is trying to regain the U.S. Senate seat he lost to Republican Ron Johnson six years ago. Photo by Steve Apps of the Wisconsin State Journal.

Feingold has blasted Johnson for voting to block a federal rule that expands water bodies protected by the Clean Water Act — such as lakes, streams and oceans — to include connected waters such as tributaries and wetlands. The rule — which Senate Republicans unsuccessfully attempted to kill — is on hold because of a legal challenge.

“Senator Johnson ignored the water contamination crisis in Kewaunee County for too long – even as residents begged for help,” Feingold spokeswoman Amelia Penniman said in an email. “Instead, he sided with the big polluters and called water safety measures ‘ludicrous.’ ”

Johnson’s campaign maintains the Waters of the U.S. rule would give Washington too much control over Wisconsin.

Johnson spokesman Brian Reisinger accused Feingold of “siding with the EPA over Wisconsin farmers and small businesses.” He called the rule “a burdensome and costly regulation,” adding, “Senator Feingold may not understand that overregulation kills jobs, but Ron Johnson does.”

Reisinger declined to address Kewaunee County’s problems specifically. But asked by the Door County Daily News.com in February how the water contamination could be fixed, Johnson said he believes less regulation is the key to a cleaner environment.

“If you want to protect the environment, you want a strong economy,” Johnson said. “One of the things that I’m doing as chairman of the Senate Committee on Homeland Security and Governmental Affairs is looking at reducing that regulatory burden.”

Coverage of environmental issues by the Wisconsin Center for Investigative Journalism (www.WisconsinWatch.org) is supported by The Joyce Foundation. Full disclosure: In 2014, two years before he became a political candidate, Lynn Utesch and his wife, Nancy, contributed $500 to the Center. The nonprofit Center collaborates with Wisconsin Public Radio, Wisconsin Public Television, other news media and the UW-Madison School of Journalism and Mass Communication. All works created, published, posted or disseminated by the Center do not necessarily reflect the views or opinions of UW-Madison or any of its affiliates.